2020 has been a terrible year.  But it also marks a milestone. We are 20% of the way through the 21st Century.  This begs the question, what will this century be known for?  We cannot say with certainty what this century will be known for, we can offer opinions on where it seems to be today.  This may be a little controversial, but the table below offers an idea.  Please add your own thoughts, reactions or alternative ideas on what the first 20 years of the 21st century mean. 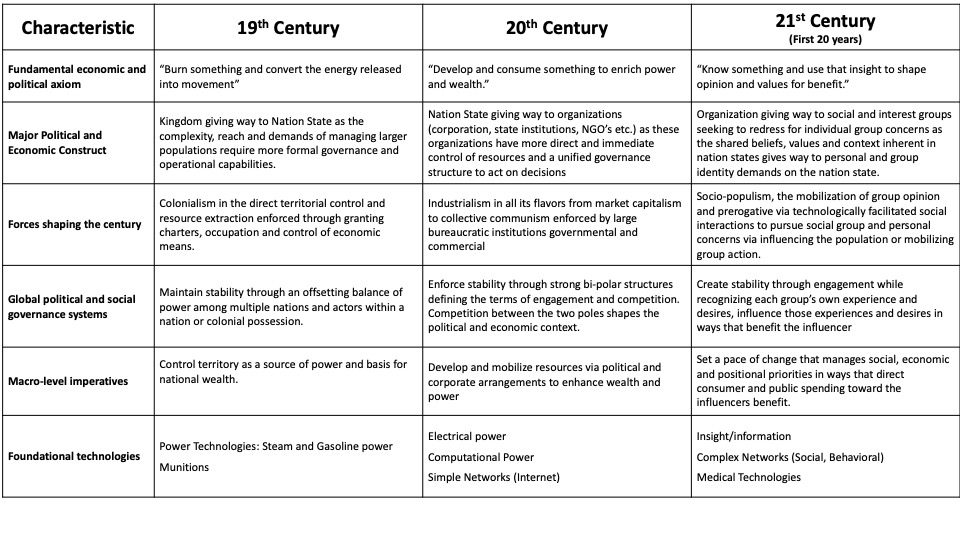 Society, Groups and Social are one theme to describe the first 20 years of the 21st Century.  The table above does not seek to point out any one group or set of groups as they exist across just about any spectrum or dimension in our modern world.

Each century builds on the ones before it, leaving remnants of the past in the present.  There are still nations, corporations, technologies etc. that will be around for a long time.  However, the context, the goal, norms and values associated with those and other institutions will change.

Discussion, debate and deliberation are the points to the table above.  There is no one right answer.  No simple table encapsulate the complexity of our world and its changes through time.  But a simple table can start a conversation.

After the first 20 years, what do you think the 21st Century will be known for?

AMP IT UP – Book Review

Now, Near and Next – an example of the Near