Disclaimer: As with all Gartner blog posts, the views in this post are not peer-reviewed and should be treated as personal views.

Maslow’s hierarchy of human needs, needs no introduction. The theory now serves as a guiding principle for human motivation worldwide.

In the below figure, I adapt Maslow’s hierarchy to technology evolution and it becomes evident how devices such as the iPhone have followed a very similar growth curve. Human beings and technologies follow the same trajectory going from basic I/O to a desire for complete autonomy. 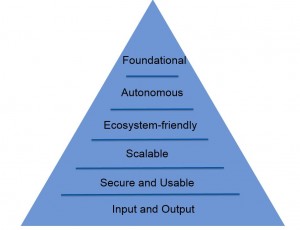 Almost every technology starts with converting some form of input into meaningful output. In many cases such as IoT and M2M, the I/O doesn’t necessarily have a human interface. I/O is the primordial origins of technology. Let us not ignore how important it is to get this right. For every input under every condition, the output has to be reasonably accurate and fast. Fast and accuracy are relative terms, but you get the point.

As technologies become reliable for their basic function, there is a growing expectation to then protect the data being processed or ingested. I don’t mean that security is an ‘after-thought’ but in the evolution of technology, security has no meaning if the technology cannot accomplish what it set out to do in the first place. In the same way that the smartphones were first introduced as consumer-friendly and later deemed as enterprise-secure after MDM controls were added.

Usability is a crucial complement to security at the second level. In fact, technologies prematurely die because of friction in user experience i.e. an experience gap. While basic I/O is an important first step, without usability and data security, it will end up as an artifact in a technology museum.

Much as people crave for a sense of belonging, technologies are better off when they are part of an ecosystem, that cares. The ecosystem provides an environment where technologies go from striving to thriving. The stronger the ecosystem, the greater the viability. Ecosystems also provide a forward momentum so technologies can grow merely through network effects.

As the technologies progress towards the tip of the pyramid, those that harness their own data and use analytics for self-improvement tend to develop attributes of autonomy and provide value without a need for instruction. It’s the same sense of autonomy one strives for in their pursuit of self-actualization.

This is a valuable analogy – both human beings and technologies need to work on their ‘quantified self’ in order to continuously improve.

Technologies that reach ‘self-transcendence’ i.e. enable and empower others gain the status of becoming ‘foundational’. Foundational technologies have an incredible influence on their ecosystem so much so that the ecosystem crumbles if they falter.

As with all forms of life and technology, a better variant rises to the top and the same cycle repeats.

Which Platforms and Tools Should I Use to Deliver High-Quality Software?