This post is about fostering collaboration in the workplace and society using lessons from the Hardy-Ramanujan story. These two brilliant minds were very different on the surface, but were bound by passionate love for mathematics, number theory in particular. Remember that this is during the days of British colonialism at its peak and when India was a British colony.

S. Ramanujan, the mathematical genius from India would have died an unknown death, had it not been for G.H. Hardy, the famous English mathematician known for his achievements in number theory. Hardy saw in Ramanujan the potential to become one of the brightest minds the field of number theory has ever known. When Ramanujan showed his conjectures and theorems, Hardy would push him to prove his theorems even when he was completely aware that Ramanujan’s findings did not require proof. 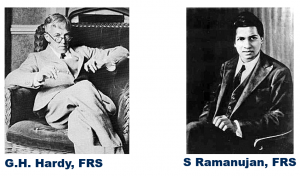 One can hastily describe the relation between Ramanujan and Hardy as a mentor and mentee. Doing so however does injustice to the depth of their relationship and the profound admiration they had for each other.  What’s more surprising is that they could not have been more different – their approach, race, religious backgrounds and belief systems were poles apart.

The Hardy-Ramanujan relationship exemplifies the true meaning of collaboration. It’s the desire of one human to recognize and unravel the latent potential in another. It is the desire to seek the betterment of the other party – this is not just professionalism at its best. This is humanism at its best. For example, true collaboration reflects the freedom of a shop-floor engineer to inform the management they are out of touch with ground reality.

As commendable as Hardy’s own contributions are, his greatest contribution to mathematics can arguably be hailed as the discovery of Ramanujan himself.

Manjunath (Manju) Bhat is a Research Director within Gartner's Mobile and Client Computing group, where he advises clients on all aspects of enterprise mobility. Read Full Bio