The boiling over of racial tensions and resultant mainstreaming of the Black Lives Matter movement in the summer of 2020 has been a wake-up call for marketers.  In the wake of the protests immediately after the death of George Floyd, many brands quickly responded with messaging supporting the movement, and with good reason – 54% of US consumers say that brands should take the lead in solving key issues in culture and society today.  But while being part of the conversation and amplifying the message can be valuable contributions, the most common actions taken by marketing leaders are often misaligned with consumer expectations.  According to the Gartner CMO Strategic Priorities Survey (subscription required), marketing leaders of companies who have taken a stance on societal issues were most likely to have participated in events supporting the issue, called for policy change, and/or made donations.  From the consumer point of view though, the best thing companies can do to respond to the Black Lives Matter movement isn’t about messaging or financial contributions. Rather, consumers believe that companies can be most effective by focusing on their internal policies – instituting internal diversity and inclusion initiatives as a way to address systemic issues, rather than react to individual incidents. 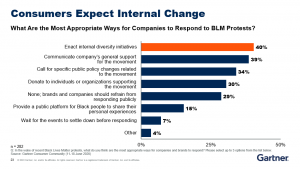 Additionally, while the focus of brands’ participation in the movement in recent months has (rightly) been on the systemic challenges impacting Black Americans, brands must understand that the push for racial justice has also laid bare the struggles of other minority groups, including but not limited to the broader BIPOC community and those identifying as LGBTQ+.  While the challenges facing each group are unique, multicultural and LGBTQ+ consumers are united in feeling some degree of marginalization in today’s America.  According to Gartner’s Values and Lifestyle Survey, conducted in September of 2020, while Black or African American consumers are the most likely group to feel marginalized  based on race or ethnicity (62% said those of their ethnicity are, to some degree),  nearly half of Hispanic or Latino and Asian American consumers said the same.  And 64% of those identifying as LGBTQ+ said that those of their gender or sexuality are marginalized, compared to only 22% of heterosexual, cisgender consumers. 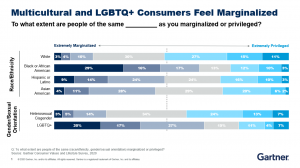 Often times, when members of marginalized groups do not see themselves reflected in the larger cultural conversation, the wounds of marginalization deepen. And after a year that has proven to be exceptionally challenging to these communities – Latino workers have suffered disproportionate job and economic losses, Asian Americans experienced racist sentiment related to the origins of the Coronavirus, and members of the LGBTQ+ community have encountered unique healthcare challenges including delay of gender-affirming surgeries due to COVID-19 – recognition, representation and empathy matter more than ever.

Armed with this knowledge, marketing leaders must use the current moment to look inward.  They can start by clearly defining company values and, alongside partners in HR leadership, use those values as a framework to institute or advance internal diversity and inclusion initiatives that are comprehensive and inclusive of all marginalized communities.  Only when a company has truly done the work internally can they be perceived as authentic in their external efforts.

Consumers See the Light, But Are Still in the COVID-19 Tunnel

Brands Must Focus on Safety, Unity in the Wake of Capitol Violence