Another year, another Dreamforce and wow, what an event. A quick jot down of my personal thoughts on the good the bad and the ugly, as I sit here in the airport on the Thursday evening waiting to fly back to the UK.

First things first, this event is massive, over 170,000 attendees and it spreads over much of the downtown area around the Moscone Center and even closes part of Howard Street to create a mini national park. I think the locals hate it due to the traffic congestion it causes?! 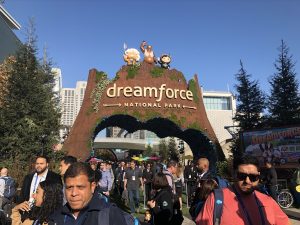 The scale is huge and unless you stay in one venue you are rushing from one hotel o conference center to another with only minutes to navigate 2-4 city blocks.  But at least you get your “steps” in!

the branding is impressive, very impressive. There’s nowhere that the logo, partners, trailblazers or the National Park  backdrops, and characters are not on display! 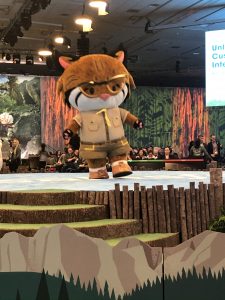 The sheer number of people can be overwhelming or frustrating. the major keynote rooms are huge and entry to obtain a seat needs to start well over an hour before the start – I usually took the easy option and watched on streaming from the analyst lounge. But when Alycia Keys came on to perform at the end of the main keynote, the streaming stopped 🙁 due to performing rights issues? Also President Obama had a chat with Marc Benioff which suffered the same fate – you had to be here to hear it!

Moving so many people around is a logistical nightmare and this could be better – trying to cross a road is tricky – 200 people start from each side and meet in the middle and a melee ensues! Also doors are suddenly “exit” only and there’s no signage so you waste a lot of time.  Turn up late to an event or don’t book and its full and you don’t get in.

The main keynote from Marc was similar to previous – a bit light on content and message, big on brand advertising – sorry customer stories.  The problem is its so high level and there;s so much happening that could be announced. Each of the many “clouds” probably got one thing to talk about.  Did I miss the Hawaiian greeting this year – the Ohana. Thank God ( oh apparently 171000 people like that stuff!  🙂  ).

I talk about the CRM side of things in another post, which are not really part of the event as far as i could say – Salesforce has risen above and beyond this!

So you have to plan your trip. So you use the agenda plan and look at a day and there’s probably 600 sessions. So focus down to a topic like “sales” and there’s still 70 to choose from each day! i went through them methodically for my interest areas – AppExchange, industries, sales and marketing and ended up with my day quadruple booked for every hour of 3 days! And that excludes the parties and 1-2-1s organised by Salesforce! A process of elimination and logistics eventually reduced this to a manageable number.  Anyway its all available on demand so I can watch it on catch up. Like that’s gonna happen?!

The booking system itself is “ok” and works on the web or on the mobile app. For me, syncing it to the worlds most popular calendar,  Outlook, was a disaster.  If you operate in the Silicon Valley G-Suite bubble then you probably fare better.

The sessions I did manage to attend were all pretty good, professional, well presented and lots of customers joining in on the main stages.

The food was pretty good – serving 170000 people in an hour 3 times a day is no mean feat.  A first this year was taking over lots of restaurants in the vicinity and you could get food there for “free”.  As well there are drinks at multiple times per day like coffee and when the evening rolls around the beer and wins comes out!
Every pub and restaurant and other vendors like book shops are taken over by other vendors who use the massive event to run their own lead gen campaigns.  I spoke to Vlocity and Highspot who organised 350 an 400 prospect meetings at their venues – impressive.
Today, Gartner’s Brett Adamson spoke at the Sales Enablement (SE) Soiree as well as at the main Dreamforce session. The SE Soiree was a group of 20 vendors who took over the rooms at the Four Seasons and arranged a packed content and exhibition – good content but reduced the Four Seasons to a Zoo.
On the Wednesday night was Dreamfest – a concert  – this year Fleetwood Mac. A big name, going through the motions, though Mick Fleetwood, drummer, did seem quite passionate.  Apparently the last gig of an 89 date tour – it showed, but a good time was had by all I think. The Oracle Stadium  is pretty handy as you can walk back to the hotel. 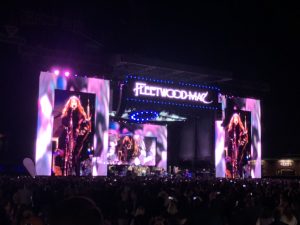 Finally the Marriott, one of many hotels used as a venue has finally got its act together and provides drinking water in the rooms without forcing you to travel to the lobby and buy a container and fill up there. Granted the tap supply is pretty good in San Francisco but the recycling argument was crazy. As the  picture  shows, they still have some way to go providing coffee in the room which utilised about 6 items of plastic! It’s now a better hotel after an extensive refurb but what about providing room service – expected at $400 per night? 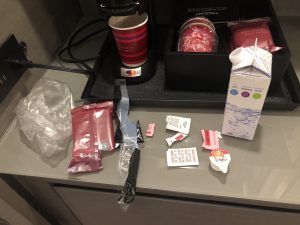 In the interests of full disclosure these are my personal views and I was at Dreamforce as a guest of Salesforce who payed for my flight, hotel and hotel.

Salesforce 2020 beyond CRM – thoughts on SWOT