The more people I talk with about threat hunting, the more I realize everyone has their own opinion and interpretation of what it is. Unfortunately, I believe some entities misrepresent what it is to fit their agenda which matches a lot of human behavior throughout history, but I digress. There are calls within the security industry for standards or a framework for threat hunting, but in my opinion this threatens the innovative nature of threat hunting. The last thing defenders need is yet another standard and control to force them into a cumbersome process, while threat actors act with immunity and iterate at light speed. Once standards or framework guardrails are put around threat hunting, the most interested party in learning and circumventing it will be adversaries. Rest assured threat actors are avid readers of reports and frameworks detailing their TTPs and security control framework documentation. Don’t misunderstand me, there is a need for standards and frameworks to provide minimum viable security (MVS), but threat hunting ain’t the place to do it.

One question I hear a lot is, how is threat hunting different from detection and incident response (IR)? Great question, and I’ve put together a rudimentary graphic to illustrate the overlap in Figure 1. I don’t believe they are mutually exclusive and complement each other. You have to detect something to respond to it, unless a third party sends you a pwnage notice letter. You leverage detection to form a hypothesis to go hunt, otherwise you are just walking around in the dark. A hunt turns into a IR engagement to evict. All three form the Pinnacle of SecOps Capability. This is where everyone wants to be, but few are actually doing it. 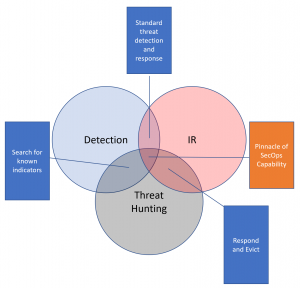 Once you have a repeatable process in SecOps it should be promoted to the relevant stage of the predict, prevent, detect, respond (PPDR) model. Scanning for indicators on a recurring basis is not threat hunting, that is detection, especially if you have outsourced monitoring to a provider. Threat hunting often begins with detection processes like scanning for known indicators or TTPs of threat actors, which can and should be formalized. However, intuition and drawing conclusions from facts that cannot be scanned for to generate a hypothesis is still very much a human art form. Thankfully humans still provide value in security! Yes, there are some data science models that can aid in speeding up this process, but IMHO you still need someone with questioner and slight rebel tendencies (look up Gretchen Rubin) to really peak over the horizon into the unknown. A machine definitely aids a threat hunter in his/her decisions and efforts, but the human is usually modifying the machine on the fly to improve the outcome of their hunt.

What is this unknown and how does it relate to SecOps?  I created the graphic in Figure 2 for a research note Gorka Sadowski and I wrote on threat hunting, titled Are You Getting What You Thought with Outsourced Threat Hunting? I don’t think anyone liked the graphic, except me! It didn’t make the cut for a published note so it made it to the blog. I know I’m not a graphics expert so I realize the obtuse nature of the drawing. The concept of threat hunting and what it provides to the overall SecOps process is what I was trying to explain.  It is a feedback loop and there is a state of unknown which is really hard to define and detect. 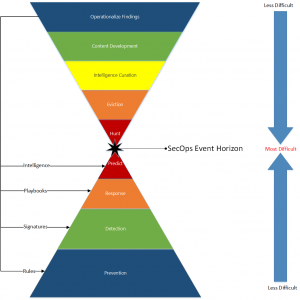 Threat Hunting in the SecOps Lifecycle

The Pyramid of Pain created by David Bianco in 2013 inspired this monstrous graphic. However, many security operators know it and it conveys the point of threat hunting in the SecOps process. Well, it does to me. I used the PPDR model at the bottom to illustrate the foundational concepts in order from easiest to hardest to accomplish:

Everyone reaches a point when prediction has been exceeded and your pucker factor is maxed out, this is the unknown. Think of this like the singularity of a black hole in space, we have no idea what is there and you have to travel past the event horizon to see it. You enter the realm of unknown problems with unknown means to detect. Remember those points about innovation and freedom to hypothesis and test?  This is where you find a way to look beyond the security event horizon to see into the singularity which can present threat actor presence and history. I know..wow!

But wait, there’s more!  Now you encounter the known concepts of detection which lead to response.  There is indicator and intelligence collection, which bigger brains than mine argue about what an indicator is. This leads to IR work to trap the adversary and evict them from the environment in a methodical manner. Adversaries leave nasty messages for third party hunters on servers to get out of their environment and hunters shutdown shells in response. It really is a digital version of cloak and dagger in the espionage world.

Will threat hunting ever be fully automated to detect every unknown? Maybe, but it won’t be any time soon. Human analysis and reasoning still plays a critical role in the art of threat hunting and I’m not aware of an autonomous system that is a direct equivalent to a threat hunter’s brain to hypothesis and reason about the possibility of alternate threat actor methods never seen before.  When that system/solution does arrive, I’ll be one of the first to acknowledge and cheer it’s capability…with skepticism!

Thoughts on Weird Hunting Analogy and Machines vs Humans