How Long Should You Look Before You Leap?

In his fascinating book, A Man For All Markets, Edward Thorp trots out a problem called the “secretary problem” and breezily gives us the solution (pp.263-4).

“Assume that you will interview a series of people, from which you will choose one. Further, you must consider them one at a time, and having once rejected someone, you cannot reconsider. The optimal strategy [the one that maximizes the probability of picking the best one] is to wait until you have seen about 37 percent of the prospects, then choose the next one you see who is better than anybody among this first 37 percent that you passed over. If no one is better you are stuck with the last person on the list.”

But why should this be? What’s so special about looking at but not selecting the first 37% of applicants and then leaping to select the next candidate who comes along who’s better than any of the first 37%? You can look up the mathematical solution to the problem. But is there a simpler way to get this result, a more intuitive way to understand why 37%?

There is. It’s through simulation. Let’s set it up.

Suppose we have n elements that are rank ordered from 1, 2, …, n. The elements are jumbled up so the rank ordering is messed up. For instance they are jumbled up as 4, 56, 73, 1, …, n, 32. We can only see the elements one at a time. The only choice we can make is to either select or reject an element when it is presented to us.

If the objective of the game is to maximize our chances of selecting the best element (which we’ll designate as element 1, second best as element 2, and so on), what strategy should we adopt? That is the secretary problem. It might seem like there’s no good strategy. But as Thorp pointed out, there is.

The winning strategy is to adopt the Look-Then-Leap algorithm where you switch from look to leap once you’ve looked at 37% of the total number of items.

Here are the steps of the look-then-leap algorithm:

The secretary problem has the following characteristics:

There are many problems that fit these simple constraints. In their book Algorithms To Live By, Brian Christian and Tom Griffiths point to hunting for an apartment in San Francisco a hot market or finding a mate as examples. My colleague Kevin Gabbard generated this list of similar problems. 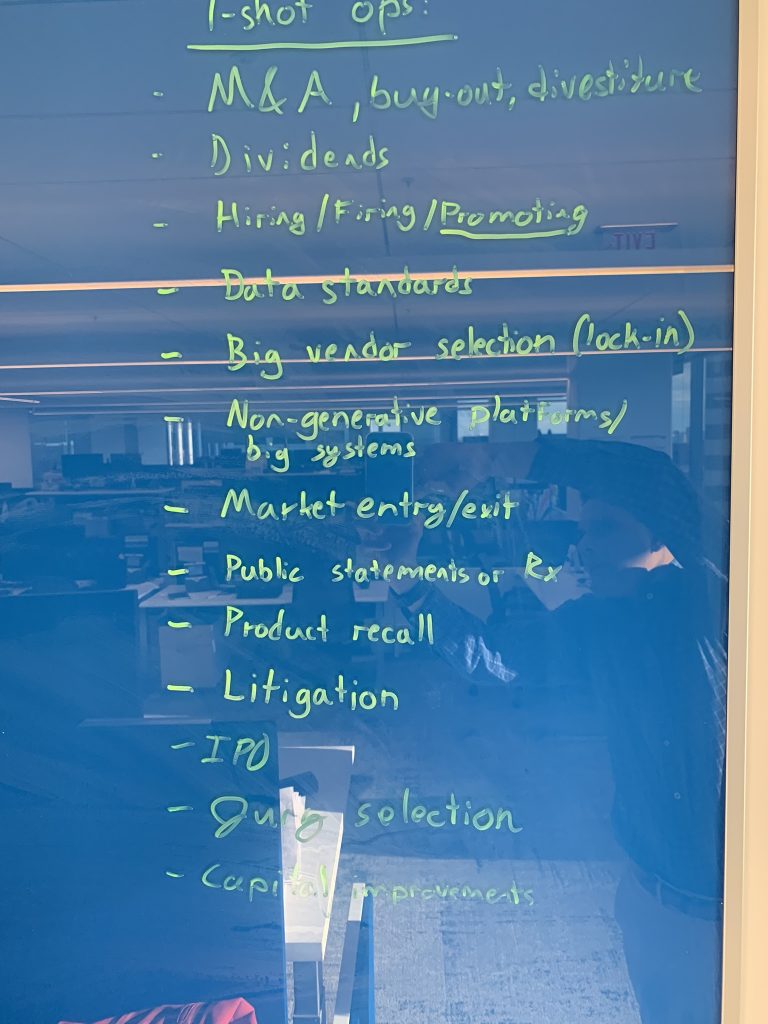 Similar Problems (thanks to Kevin Gabbard) 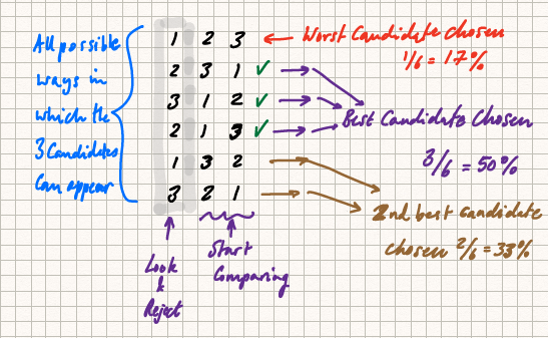 Rather, we’ll start with the candidates in order 1, 2, 3, …, 100 as one of the possibilities. We’ll then scramble up the order randomly many thousands of times to simulate a the experiment of choosing a candidate based on the Look-then-Leap algorithm. Each time we pick a candidate based on the look-then-leap algorithm and then at the end of the run of simulated trials we check to see what proportion of the picks are picks of the best candidate.

With 10 candidates to choose from in total, we were told that the best strategy is to look at 3 or 4 candidates first, reject them and then choose the next candidate who’s better than the ones initially rejected. 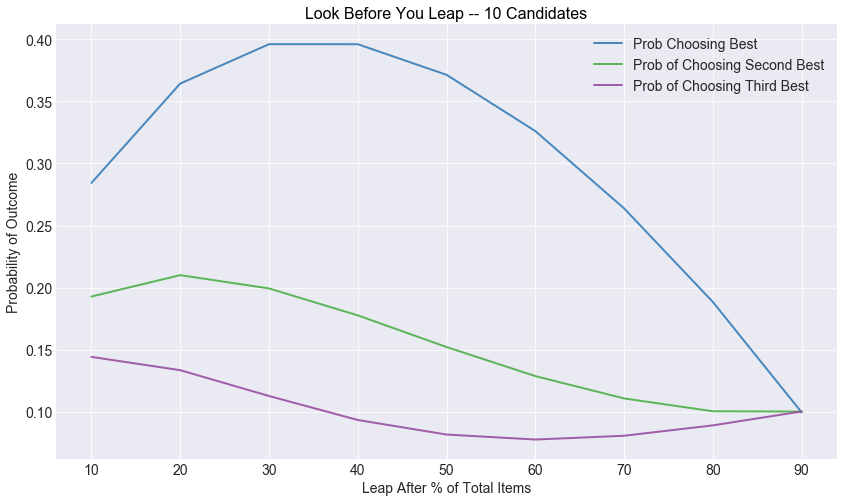 The probability of choosing the best, second best, and third best candidate from a pool of 10 candidates if you follow the look-then-leap algorithm.

The simulation indeed validates looking at (roughly) 37% of the pool before leaping. The simulation also reveals three other curious facts:

We can check this third point by simulating the look-then-leap algorithm for a pool of 100 candidates. 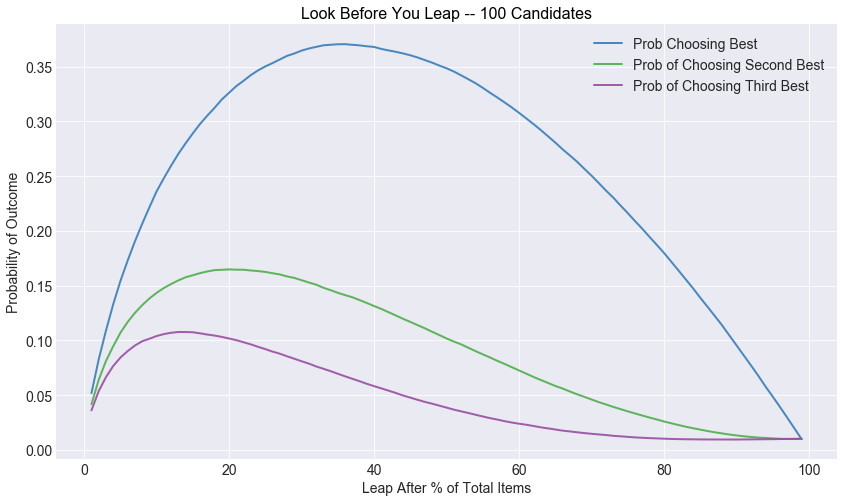 The probability of choosing the best, second best, and third best candidate from a pool of 100 candidates if you follow the look-then-leap algorithm.

In their book Algorithms to Live By, Brian Christian and Tom Griffiths underscore the miraculous nature of this third point (p.15):

“If we were hiring at random, …then in a pool of hundred applicants we’d have a 1% chance of success [of hiring the best applicant],  in a pool of a million applicants we’d have a 0.0001% chance. Yet remarkably, the math of the secretary problem doesn’t change. If you’re stopping optimally, your chance of finding the single best applicant in a pool of hundred is 37%. And in a pool of a million, believe it or not, your chance is still 37%. Thus the bigger the applicant pool gets, the more valuable knowing the optimal algorithm becomes. It’s true that you’re unlikely to find the needle the majority of the time, but optimal stopping [i.e., using the look-then-leap algorithm] is your best defense against the haystack, no matter how large.”

Jitendra Subramanyam leads a research team that is focused on how Chief Data Officers manage the Data and Analytics function in their organizations. Jitendra teaches a course on machine learning at Harvard Extension School. The course is a practical introduction meant to help business executives understand key concepts and techniques in data science and immediately apply them to business problems.Read Full Bio

Thoughts on How Long Should You Look Before You Leap?