Like, late night I’m on a first class flight / The only brother in sight the flight attendant catch fright / I sit down in my seat, 2C / She approach officially talkin’ about, “Excuse me” / Her lips curl up into a tight space / Cause she don’t believe that I’m in the right place / Showed her my boarding pass, and then she sort of gasped / All embarrassed put an extra lime on my water glass…. – Mos Def, (Track 15) Black on Both Sides

When I talked to a particular vendor last May about the concept of “Hoodie” IT, it had nothing to do with Trayvon Martin. It was a two-fold reference to the new realities of IT, mentioned during the same week Mark Zuckerberg wore a hoodie to a Facebook investor meeting months before the IPO. The first part of the reference spoke more to the fact that mobile, social, analytics and the cloud were accelerating the shift from command and control from executives (“suit and tie” IT) to everyone’s IT (hoodie IT). The second part spoke to the level of effort one has to exert to be successful in any endeavor; in that you have you work extremely hard to achieve your goals and objectives and through that work you’d be wise to put your hoodie on. It’s the reason Rocky Balboa isn’t running up the front steps of the Philadelphia Museum of Art in a pashmina: 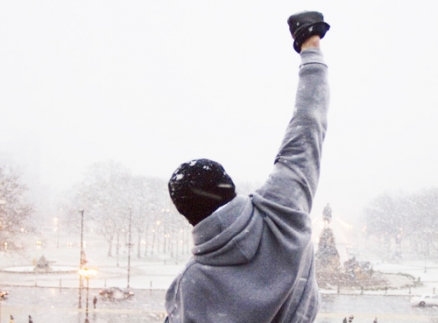 This past May, while attending the same vendor conference where Hoodie IT was discussed, I looked up and saw a picture of the company’s founder wearing a hoodie on a pre-session slide a slide discussing the new realities of IT. I didn’t think twice about it. I got it, and I think everyone else did too. For those who saw it and snickered, I think it spoke to the fact that there is very much a suit and tie contingency who don’t believe a “hoodie element” belongs in IT.

For obvious reasons, I think they are wrong

This isn’t to compare the suit and tie contingency to George Zimmerman, but rather to discuss how the pre-conceived notions and prejudices held by those who decide who “belongs” are preventing us all from reaching our goals and objectives. I honestly don’t believe George Zimmerman shot Trayvon Martin because he was black. I also do not believe the trial was about race. I do believe that the events that led to the shooting of Trayvon Martin stemmed from one man using visual cues of race and attire to determine that someone was where they were not supposed to be, and deciding to do something about it.

I knew George Zimmerman would walk. Part of that premonition is because as an IT Research Analyst, my job is evaluate and analyze the information I have at my disposal to draw conclusions and make predictions. Furthermore, as an IT Operations / IT Service Management Analyst, I spend a good deal of time helping organizations understand:

So it’s with those analyst skills that I can understand how we have arrived at a particular point and time and void of emotion, help to determine which steps are necessary to reduce of the risk of arriving there again.

However this time, the issues with determining who does and doesn’t belong are personal to me and I actually live in the environment that’s being affected. Unfortunately, based on what I wear and what I look like, I’ve been told too many times that I don’t belong somewhere. And because I’m in the environment this time, I struggle with clearly helping to determine the next best set of steps.

Jarod Greene “being in the environment” obviously does not often yield the same unfortunate outcome as what happened to Trayvon Martin. What I’m speaking of is the countless number of times that a conference security guard told me to leave a room because it was reserved for “press and analysts only”, before actually seeing my identification badge. I’m talking about the times I’ve gone on-site to see clients alone, where I would check in with the receptionist and await the client in the lobby alone, only for the client to come out, and look around the room confused as if the Gartner analyst who traveled to see them had suddenly left the building. I’m talking about the time when a friend of mine (who is also African American and works in IT) was accidentally invited to a conference call, only to hear himself being referred to as “the angry negro”. I’m talking about the Indian computer programmer in Silicon Valley who architects the next great solution, and has to hire a white graduate student from Stanford to be the pitchman for the product because VC’s have told him that his people are not good with money. I’m talking about the countless number of disenfranchised individuals (women, gay/lesbian/transgender) who are passed over for opportunities, positions and promotions for a variety of reasons that include, but are not limited to, not being a team player, being too confrontational, being hard to communicate with, not being “strategic” enough, or (my favorite) not being articulate enough. Being told you don’t belong doesn’t just hurt; it’s impacting our abilities to reach our goals and objectives. Just think about the last time your company tried to innovate with a room of individuals all from the same background who just so happen to all get along.

It’s sad when I’m at a large IT conference and I can count the number of African Americans attending on one hand, and even sadder that I don’t even need all 5 fingers to count the number of African American analyst colleagues at my own company. For the record, we all belong there, but I’m a little tired of the joke we make that we’d better split up soon, so not to alarm anyone. I’m also a little ashamed to admit that before I joined the analyst ranks, I intentionally rebuffed the efforts of people like Frank Kenney and never introduced myself to Daryl Plummer, because I didn’t want anyone to think I was there outside of my own merit.

What I enjoy about being a minority in this field is that everyday I’m provided with a daily opportunity to change the stereotypes held about African American males. So as you read this, I’m challenging you to better understand and address their preconceived notions and prejudices, and apply them to a dialogue that effects change. There is no single solution to solving the discrimination challenges of the world, but if change starts at home, allow me to use this blog as a platform to ask that you and others around you open your mind when you consider who does and doesn’t belong somewhere. You’ll be surprised as what transpires next.

Jarod Greene focuses on IT service support management, specifically, IT service desk management, organization and technology. This includes social IT management, software as a service (SaaS), IT support process improvement (including the ITIL framework), and IT knowledge management and self-service approaches. Read Full Bio

Thoughts on Hoodie IT