Not long ago, I wrote about poets and quants in the marketing department. I suggested that, while it may sometimes feel like the mathletes have the advantage, both skillsets are crucial to modern marketing.

But the reality is that these skillsets hardly exist in isolation. Today’s marketer is expected to be a little of both, to embody the head and the heart or—to invoke the now tired refrain—the art and the science.

While it’s certainly easy enough to say these words, we should acknowledge that the person I’m describing is rare. Maybe not quite unicorn, Sasquatch, leprechaun or chupacabra*, but a rare individual nonetheless. So rare, in fact, that many CMOs end up searching in vain for the platonic ideal.

And while they’re busy searching, more often than not, the kernel of this ideal is hiding in plain sight.

What I mean is that this perfect blended archetype of the poet and quant doesn’t, as my colleague Chris Ross puts it, simply fall off the org chart. And, truthfully, they’re not easily found out in the wild.

Which is why cross-training is essential. In his research on marketing leadership and organizational design (subscription required), Chris talks about the “Fat T” marketer. This idea builds on the concept of the T-shaped knowledge worker, who is deep in a specialized domain—represented by the vertical dimension—but also contextually aware and conversational fluent in its adjacencies, represented by the horizontal dimension.

By contrast, the Fat T marketer is equally able to make these horizontal connections, but can also go several clicks deeper along this dimension. They also remain deeply expert in certain areas, but the scope of their expertise has expanded from narrowly specialized to mastery of a broader universe. 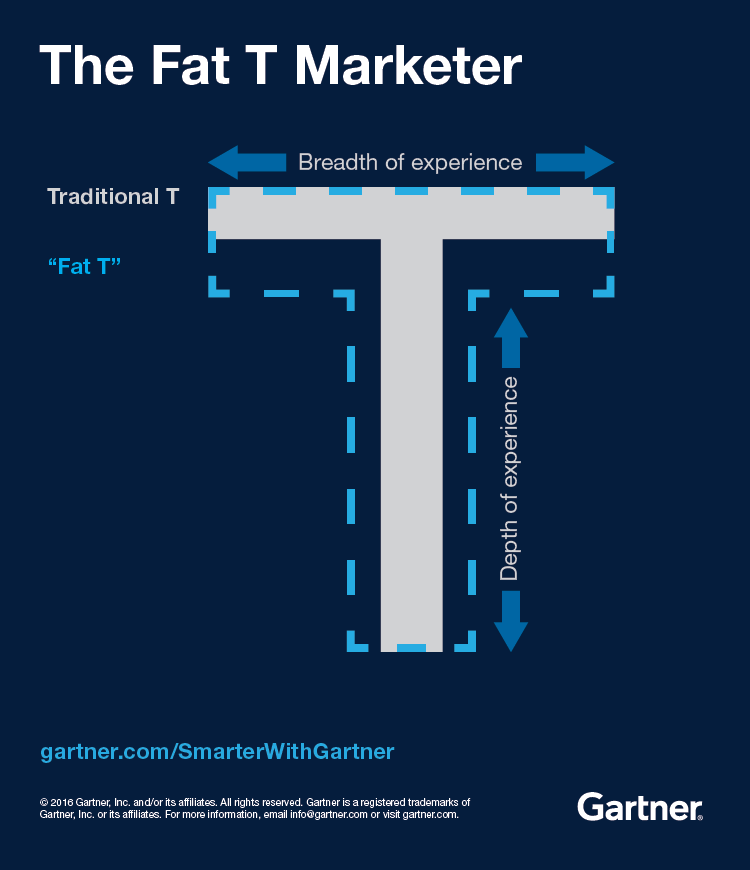 This is not to say that you won’t find a few marketing unicorns in your midst or out in the wild, but the assumption of this sort of preternatural skill, discovered at scale, is probably a fool’s errand. Few companies have ever been built on the premise of widespread genius. Genius is, by definition, rare.

The rest of us have to work for it.

(*) If you attended business school or occasionally participate in long corporate meetings, maybe you’re familiar with the game “buzzword bingo,” where classmates or colleagues wager on the canny insertion of buzzwords or absurd, seemingly unrelated terms into discussion. Just in case you wondered … I’ll admit that I was recently subject to a similar bet. The word? Inexplicably, Chupacabra. Checkmate.

A CMO by Any Other Name

Four Ways Customer Experience Projects Can Go Off the Rails

The Three Cs of Messaging and Positioning in Marketing: Pick Any Two