Timing is everything, especially with this morning’s announcements of 80M records stolen from Anthem.  I just completed this analysis of HHS healthcare breach reporting data.

By all reports, the Anthem records certainly contain personal information; they MAY contain Protected Health Information – if so they would be covered by HIPAA and HHS regulations. Time will tell. Were that true, it could be the single largest healthcare breach ever, and we’ll be well on our way of achieving my scenario analysis that EVERYONE IN THE U.S. WILL HAVE THEIR HEALTH INFORMATION IN THE WILD BY 2024 (scenario #3 from this blog post).

If you have followed my blog, you know that I annually review the US HHS breach report, just to see what kind of year we had in healthcare security.  Well, enough time has gone by since the end of year reporting to make sure we have captured the stragglers.  Prior year’s observations are here for 2010,   2011, 2012, and 2013.

There is a positive side to these numbers. The level of recidivism has declined sharply.  Our usual suspects that appeared multiple times in prior years reports didn’t show up this year, and nothing unusual pops out in terms of repeat offenders.  Let me know if you see the data differently. There is hope that one can learn from a careful analysis of past breaches.

Here’s what the number of breaches over the past six years, based on government data, looks like: 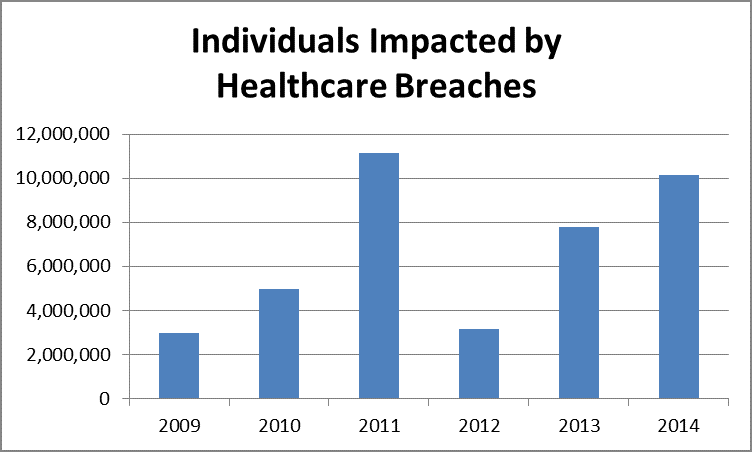 For those of you keeping track, here are the prior years Top 3: