If you have followed my blog, you know that I annually review the US HHS breach report, just to see what kind of year we had in healthcare security.  Well, enough time has gone by since the end of year reporting to make sure we have captured the stragglers.  Prior years observations are here for 2010,  here for 2011, and here for 2012.

This year I firmed up our counting rules.  For example, I count all the multi-year breach counts in the year that the last breach report ended.  So there are some slight variations from prior years reporting.

A couple of observations:

Here’s what the number of breaches over the past four years, based on government data , looks like: 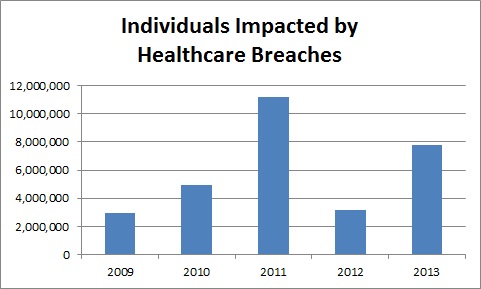 Then there is the hall of shame.  Let’s recap the top 3 largest breaches by year:

And from the “will they ever learn?” department, these cases jump out: