In the interests of full disclosure, I live in  the state of New Hampshire in the U.S., which some of you may know has a motto of “Live Free or Die”.

Pretty blunt, I know.  And my wife, liberal that she is, every year asks the state if its ok to get a license plate WITHOUT that motto (to no avail).

I mention that because the current trend in US healthcare is to realize that all of the work done on reform to date will make only a minor dent in the real problem: the cost.  I suppose it depends on your point of view if its a problem. I once worked for a Hospital CEO that felt (wrongly) that what the population spends on hospital healthcare was a fraction of what they spend on cosmetics – so it is much ado about nothing.

The Massachusetts reform model, which was a precursor to national efforts, has shown that healthcare reform has had very little impact on costs – in fact, it probably increased costs.

So the current thinking is that the only way to impact costs is to impact behavior (so says this recent article in Modern Healthcare).  The poster child for that line of thinking is smoking cessation programs – that lead to drops in mortality, and lung cancer, hence system savings in hospitalization and care.  No doubt.  So the model can extend to eating (obesity), exercise (or lack of it), sun exposure, use of seat belts, whether you rock climb, look both ways when crossing a street, wash your hands for 10 seconds 20 times a day, etc etc.

Just how far we go beyond education (through incentive payments or just plain legal efforts) is a big question.  That became clear in a recent visit to Phoenix, when I saw this: 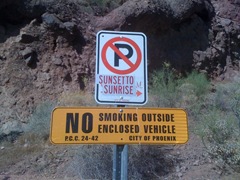 Here we are, in a fairly windy area (at the start of a hike to a popular mountain), and if you smoke, please stay in your car.  But not if your car happens to be a mobile restaurant.  I don’t know, it just struck me as a bit over the top. BTW – I never have smoked, don’t have many friends that do, and hate it when someone next to me does smoke. But Pleeeaassee…

The trend toward “behavioral economics” affects IT from the perspective of  how we design our current batch of clinical and patient health systems, and will only accelerate as we deploy home health care systems that monitor citizen health 24X7 through wireless technologies – even for the healthy.  Imagine getting an email from the doc because of an alert at the central office that says your cholesterol spiked last night.  So much for take out.  No pizza for you.

These are significant social issues of choice, education, and compliance – which are coming a us like a freight train.  Because healthcare costs too much.

Which reminds me of the  time I was in Northern Ireland, around the time of the troubles; bombs going off, British troops being deployed, parades in Belfast under siege.  A co-worker and Northern Ireland native grabs me and says “you from New Hampshire in the states?” to which I replied yes. “Humphhh” he says, “Live Free or Die?  Isn’t that a bit drastic?”.

And then a rifle toting soldier asked us to move on. For our own benefit, of course.

Thoughts on Behavioral Economics & Health IT