While I continue to believe that having a rich ideal customer profile of the organizations you target (that includes psychographics), individuals do matter.   They are the members of the buying team: decision makers, influencers, users, and more.   And, there are certainly cases where a single individual through either their charisma or positional power can greatly influence–or mandate–the buying decision (as the scope of the project and value opportunity expands, the need for positional power grows.

So, we need both–understanding of the org and team, but also of individuals.   I decided to take a look at our survey respondents based on the functional focus of their role.  There are some position level factors in here–since we look at C-Level roles, so a bit of a mixed grouping.

The first look is based on the percentage of respondents feeling their expectations were not being met by the purchase (again this was the largest purchase they were involved with): 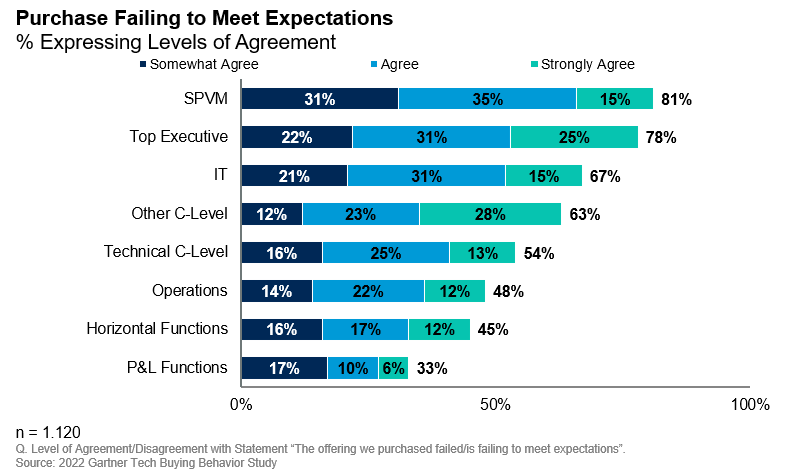 This is quite telling.  The two groups that are most likely to feel their expectations are not being met are top executives and individuals in a sourcing, procurement, or vendor management role.  The latter is concerning as they should be about gaining the understanding to make good decisions and being realistic about expectations.   It is also a bit alarming for IT roles to be so high–clearly this is not a question of IT or business.   It is a question of focus and effort.  The groups that are least likely to have expectations not being met are those respondents in P&L or horizontal functions (e.g. Finance, HR).   This might be driven by them having a very specific focus and objective that they can easily assess.  We also see some of the groups that have less of an expectations problem putting in more work than the other groups (consuming more content; engaging more deeply with vendors, etc.).

The other component of regret is the decision to settle for something less ambitious that originally considering: 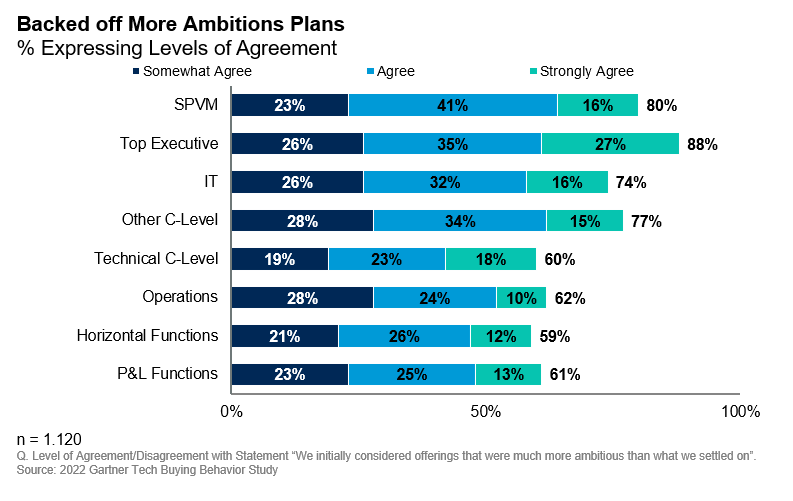 The chart looks fairly similar, but we can see that for every group, except SPVM that is basically equal, we have a higher percentage of respondents feeling they had to back off more ambitious plans.  This too is alarming as the need to settle is a confidence eroding approach that can permeate everything else that is going on.

The real question is why does this happen so much?   For the higher level executives, it looks like it could be one of two things.  First, these folks are less likely to engage deeply (which makes sense given time pressures), so their expectations may be based on incomplete knowledge (.  The settling aspect may be the executives way of mediating conflict–backing off to get the team to an place they can agree on.  And that is really the second thing, executives basically wanting decisions that the team can get behind and commit to doing.   Just like vendors overpromising, you might have buying teams overpromising to try to secure the decision.

As we get deeper into the organization, the question is more of focus, I believe.   Horizontal groups, P&L centers, and operations are more likely to have very clear and specific agendas and questions as they go to make decisions.  Groups like IT and SPVM may be serving many different groups and their attempts to keep everyone somewhat happy could lead them astray.   They might also be operating based on a mindset and principles that were prevalent when technology just supported the business vs. today’s world of more strategic value.

Finally, what can we do about this?   I think it comes back to being clear on not the expectations of the purchase, but the expectations of the specific role and responsibilities that each group plays on the buying team.  The more clarity there; the more likely that groups will dive deeper into their areas and build a more complete understanding.  As a vendor, you should be telling your customers what the best mix is for the buying team and the roles of each party.  That will help your customers immensely.

A Look Back at 10 Years of Blog Posts

Detect and Deflect Detours Ahead to Accelerate Opportunities