After many months of build-up and teases, we finally revealed some important facts about large scale technology purchases last week at our virtual conference (#GartnerTGI).  There have been press releases and articles and lots of tweets from me that you can go find, but let me reiterate the most important facts:

We’ve been talking about democratization of technology, the new chasm, and consensus buying (starting with “The Challenger Customer”) for a while.   Now we know the real impact of these consensus issues–when we encourage and support—or don’t try to address–appealing to individuals unique goals,  we are delaying decisions.

I decided to look a bit deeper at the conflicting objectives story.  The chart below shows all of the responses (over 1000) to the question that was built using a 7 point likert scale.   As the chart shows, folks that feel strongly that there is no conflicting goals buy much faster than everyone else.   As soon as I get to neutral or agreement that there are conflicting objectives, the time takes a big leap (after a small bump with a choice of “3”). 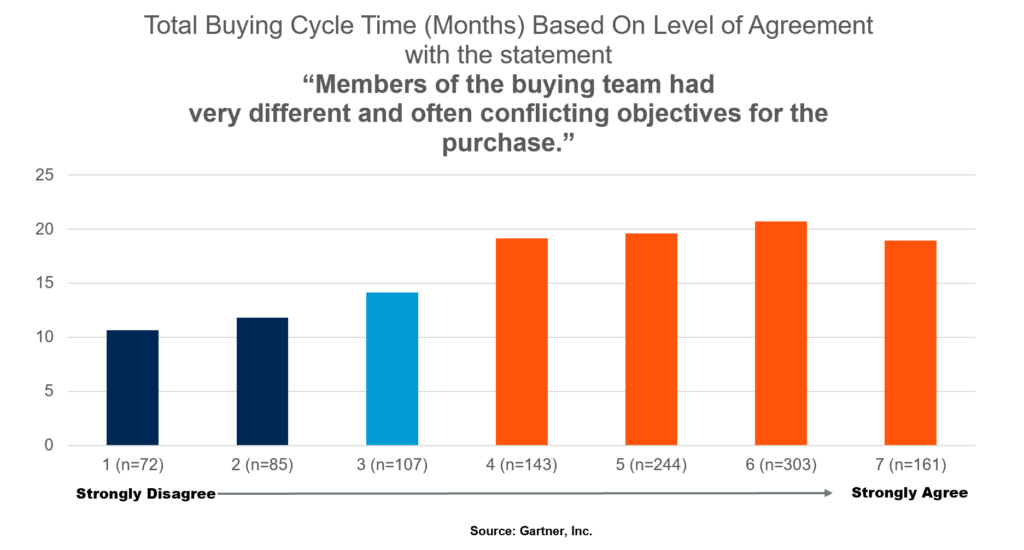 The overriding advice given this data:

Worried about longer sales cycles?  Then you should be worried about the impact of conflicting objectives

Who is Responsible for Expectations

Most Valued Content Continues To Build The Regret Story

One Step Forward, Two Steps Back?