The Issues with “Drop In” Decision Makers

In a recent post, I shared some of our finding regarding the composition of buying teams with regard to active vs. occasional participation.  That got a few of us thinking and we decided to dig a little bit deeper into one aspect of this, one “team role”–the decision makers.  We wanted to see if the impact of different combinations of active and occasional decisions makers on the buying process (and the resulting effectiveness).

First a reminder, we defined these two groups as :

What we discovered feels pretty important–maybe more so for enterprises that are buying technology, but also for technology vendors.

The chart below shows the percentage of responses to several statements on a 7 point likert scale-where we are including scores of 5, 6, or 7.  Given the statements, a shorter bar is “better.”  It means that the respondent did not agree with these statements.  The difference between our best and worst case decision making combinations is eye opening. 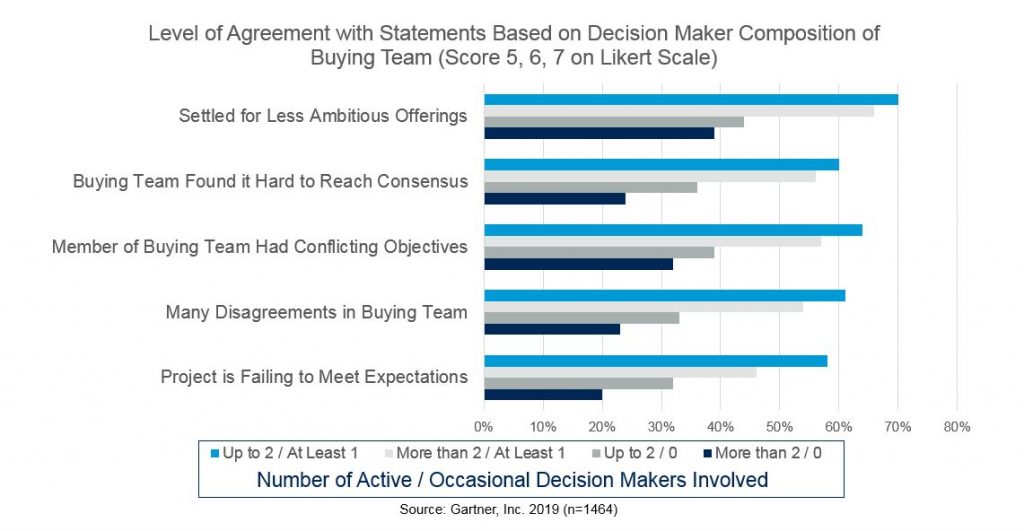 I believe (there is more work to do here, so these are almost hypotheses) that these results connect to some things we know.  First,  the evidence of the value of diversity in teams continues to mount.   When there are more active decision makers, it is more likely you’ll have diversity–including perspectives from people in different groups.  That is why we think more active decision makers is better.   For the occasional problem, I suspect it is a problem of context.  They occasional decision maker drops in without understanding everything that went on.  They are likely senior level (since they are decision makers) and may be prone to talking rather than listening.  So the team, acquiesces to there comments, all while being frustrated.  A final issue is that occasional decision makers often increase the likelihood of delays due to revisiting decisions that had already been made.

For vendors, the first thing to do is be aware of these patterns and work diligently to understand the buying team composition.    There may be cases where your sales teams is playing a bit of a role of connector–having discussions with the buying team and the occasional decision maker.   In these, the sales team can become the context creator, building a bridge within the buying team.    Beyond this, finding ways to anticipate some of the issues that arise (as outlined in the chart) and being proactive about helping the buying team confidently overcome them can be critical.

There is more work to be done here.  I’d appreciate thoughts from my readers on how to deal with these challenges, from both a buyer and seller perspective.

Thoughts on The Issues with “Drop In” Decision Makers