When you write and talk about a topic a lot, you often find like minded people.   Through the work I’ve done around positioning, messaging, and storytelling, I’ve had several interactions with Ken Rutsky.   Through those exchanges, it is clear that we have similar views on many things (and enough uniqueness in our opinions to drive both of us to expand our perspectives).   Recently, Ken was kind enough to send me a preview copy that I devoured quickly. The book,“Launching to Leading”, will be available in the next week or so on Amazon and other sites.   I highly recommend it to anyone who has a passion for messaging and storytelling. 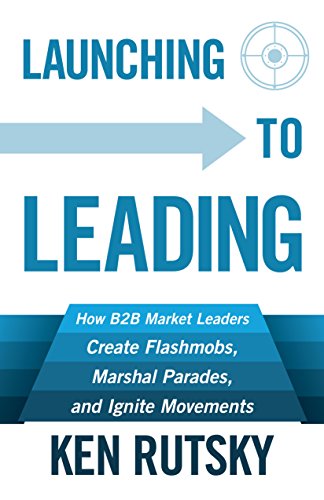 The book really focuses on how to grow a business and, like me, Ken believes in the same foundation—a great story.   But the light bulb moment for me, and what got me so enthralled, was Ken’s simple, but critical concept–moving from identifying unique value to establishing a viewpoint.  That idea captures the essence of my feelings about positioning and storytelling, but in a much clearer way.  It may also help many of you who work on positioning using the Crossing the Chasm framework.

What is a viewpoint?   Turn it around. It is a point of view.  It is a stance.  It is a reason to believe and a reason to care.  It is why we do positioning.  It is your context in the market.  You can learn more about the viewpoint idea from Ken in this webinar (registration required).

One of the most obvious viewpoint examples comes from Salesforce.com (SFDC).   There viewpoint was “No Software.”   That was the whole basis of their entry to the market.  Yea, there is an awful lot of software in SFDC, but their market context was to change how we thought of software.  Instead of being something we install; it is something we just configure and use.  And there is nothing for us to maintain.  That context established the basis for them to be relevant.   If they had simply launched as “Cloud Sales Force Automation or “Sales Force Automation as a Service” they would not have had a viewpoint that stood out.  They would have been just part of the crowd.

In the book, Ken explores 4 different paths, or styles, of viewpoints.   Check them out.  But more than anything, start working toward defining one for yourself.  Without a viewpoint, the market has no context as to why you matter.   Positioning provides insights for establishing a viewpoint.  Once you have one, it becomes part of everything you communicate.

Great viewpoints establish the foundation for leadership.   There is a lot of work to do from there, execution matters.  But trying to win without a strong viewpoint is a much harder battle.

Standout from the crowd.

Have a point of view.

Pressing Questions on Storytelling and The New Chasm