Today, a new book, The Challenger Customer, is scheduled to hit the streets.  I was able to read an early copy, courtesy of my friend and colleague, Tiffani Bova.   It is an interesting read and reaffirms much of the research we have been seeing with regard to B2B buying for the last few years (albeit the book looks at B2B buying across more than just the technology segment where we focus).  The team from CEB did a great job.

A major theme of the book is the “consensus buy” and how to better deal with it. The reality is that in most cases there is not a single decision maker–there are multiple stakeholders that all have to agree on the buy.  This has been going on for a while.  In 2013, our research into buying cycles focused on the important role of buying teams–and the shifting responsibilities that occur throughout the process. 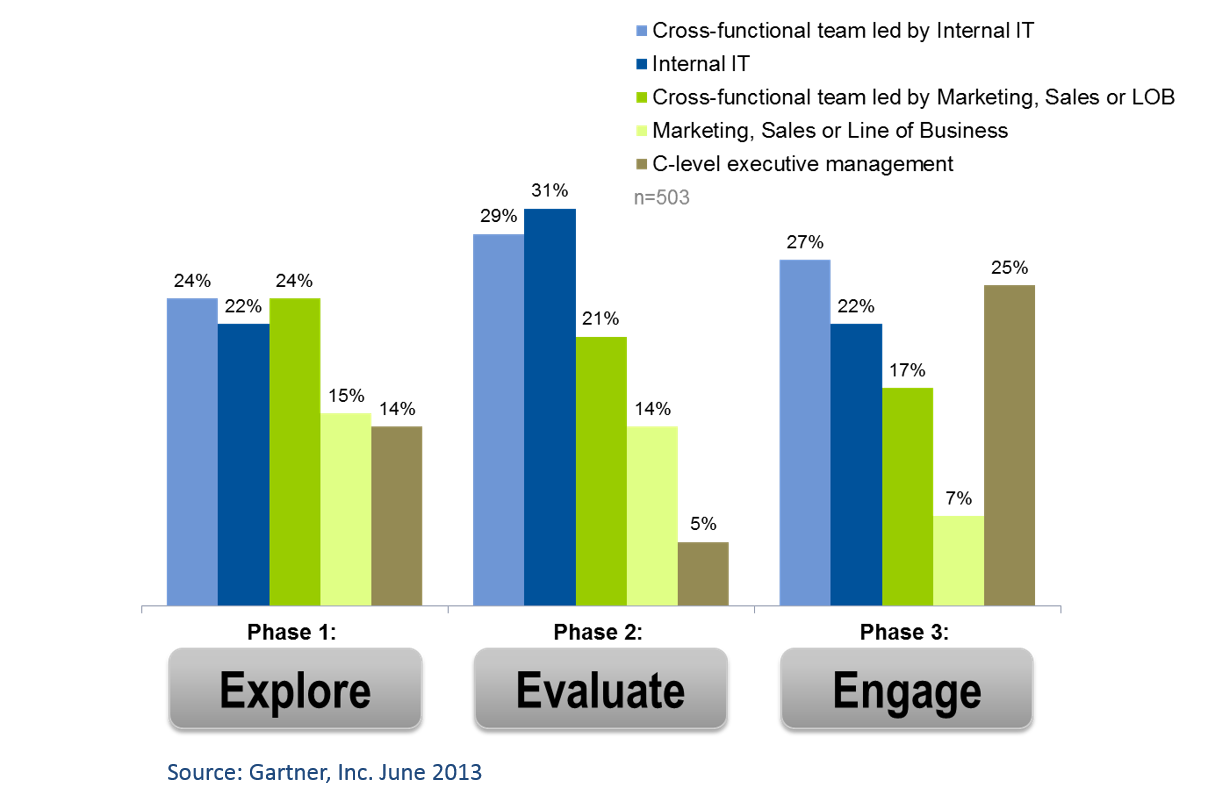 These shifting responsibilities and the need to develop broad consensus  are the sources of many selling challenges that tech providers have been experiencing.  But, and the authors point this out, this is also a challenge for buyers.  They not only have to make a decision, they have to convince a lot of others to agree.   And often many of these others may not share the same priorities and interests.  The more diverse your solution…the more value elements…the more touch points…the more people that have to be  involved in the decision; the harder it gets.  For you.  And your sponsors in the buying organization.

Perhaps, another path to consider in dealing with the consensus buy is to avoid it, particularly in the early stages of gaining market traction.

When you think about the advent of the “As a Service” market, most successful providers got their start selling to a single function (e.g. sales, service).  The OPEX pricing model was the “strategic” emphasis of pricing, but more importantly, it changed the approval path.  There were few, if any, rules for buying this “service”–other than spending limits.  “Consensus be damned.  I don’t need others, I’m just buying this.  Its within my signing levels.”  This shift in what it takes to buy was a huge driver in early adoption.

It also resulted in traction that made gaining consensus later easier.   Imagine if the early buyers had said, “I’m gonna deploy this across by entire sales organization, integrate it with our ERP system, and change our entire service process.”  I believe that the SaaS model would have flailed if that approach was taken.   More, and bigger,  would not have been better.

But by starting small and focused, credibility was developed that enables bigger purchases downstream.  This is core to the land and expand concept.  But one of the key reasons that  is not typically stated.  The “land” part of the equation works because it avoids the consensus buy.

As tech providers introduce new capabilities, they often try to differentiate with more.   But they may want to think about less.  Narrow the focus, prove the value.  Reduce the number of people that have to agree to the buy.   Then, once value is delivered, introduce (or emphasize) capabilities that will drive the need for broader approvals.

If you start with a broad, cross organizational impact story, be prepared for a complicated consensus buying exercise.  Even if you get C-level execs as your sponsor, they will likely want consensus from the teams involved.  And all it takes is one, or two, saying “this is great, but our team isn’t prepared to take advantage of this” to slow things down.

To be successful long term, it is likely going to be impossible to avoid consensus buying decisions.  But minimizing the need for buyers to seek that consensus can be a very effective approach to gaining market traction.

As you look at your products and services, and your messages, here is one more perspective to assess:

The buying perspective (how hard it is to buy) should be a key driver for your go-to-market strategies and the challenges for buying teams in achieving consensus in their own organizations should be a factor in planning.   Adapting approaches with insights into this is one key ingredient on the path to shorter sales cycles and more successful performance.

What Ever Happened to Intellectual Curiosity, Critical Thinking, and Perspective Taking

Models are clean, Markets are messy