I just got back from a long trip to Europe that ended with 12 days of work but started with a fantastic 14 day vacation in Scotland and, mostly, Ireland.  I am ready to go back now.   Friends keep asking what our favorite thing was, but both my wife and I answer that there are too many things to pick just one.

But a definite pair of highlights for me where going to the All-Ireland Gaelic Football semi-final match (won by Donegal over Dublin.  Donegal was beaten in the final by Kerry on Sunday) with Connie (my wife) followed by me buying a ticket outside the game for the Hurling final after Connie had to head back to the States.  That match ended in a tie (between Kilkenny and Tipperary)–which means they replay the whole match, that will be on Saturday, the 27th.  Both were amazing (and I try not to use that word lightly) experiences.

Gaelic Football and Hurling are not well known in the States (and probably other parts of the world) but they are huge in Ireland.  We have Irish friends that play for a club team in Charlotte.  That is how we got into it.  Football combines elements of soccer, american football, basketball, volleyball, and rugby.   Now imagine a similar combination, but with a small either ball and a stick–you have hurling.  Both are fast action sports.  As an ice hockey fan, I can appreciate that.  The general rules are pretty easy to pick up (although fouls are a little tricky).  Watch a game or two and you are likely to be hooked. 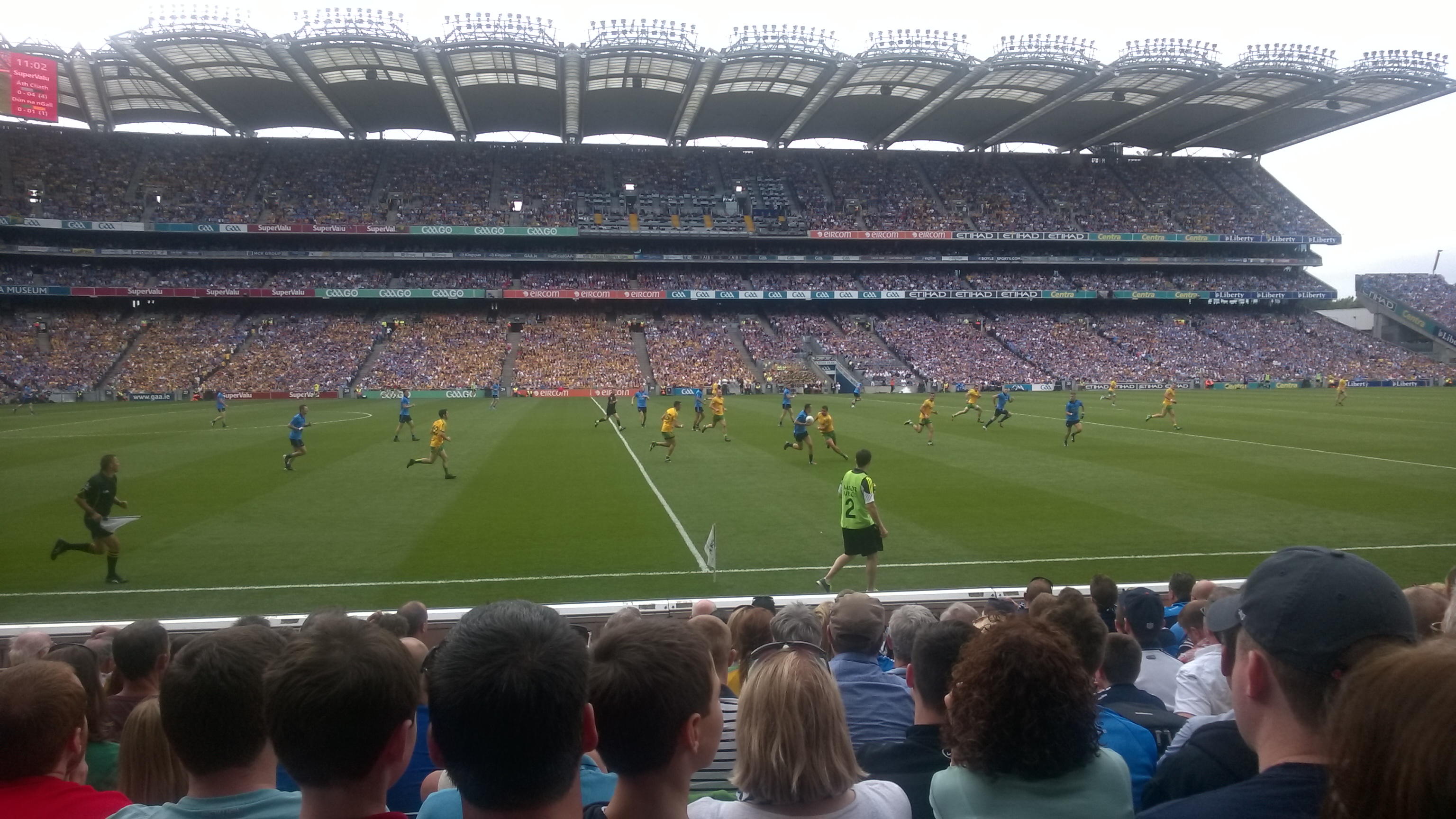 As you can see from the picture above, we were very close for the football match (I bought the tickets months ago at the suggestion of my friends at Connolly’s).  For the Hurling final, I was in the second to last row in the stadium, but it was still great.   Both matches had over 80,000 people.  One thing to note with that is that this is not a professional sport.  These are elite teams that represent their counties, but the players all have “day jobs.”  But the passion rivaled, and exceeded, what I have seen for many professional sports. 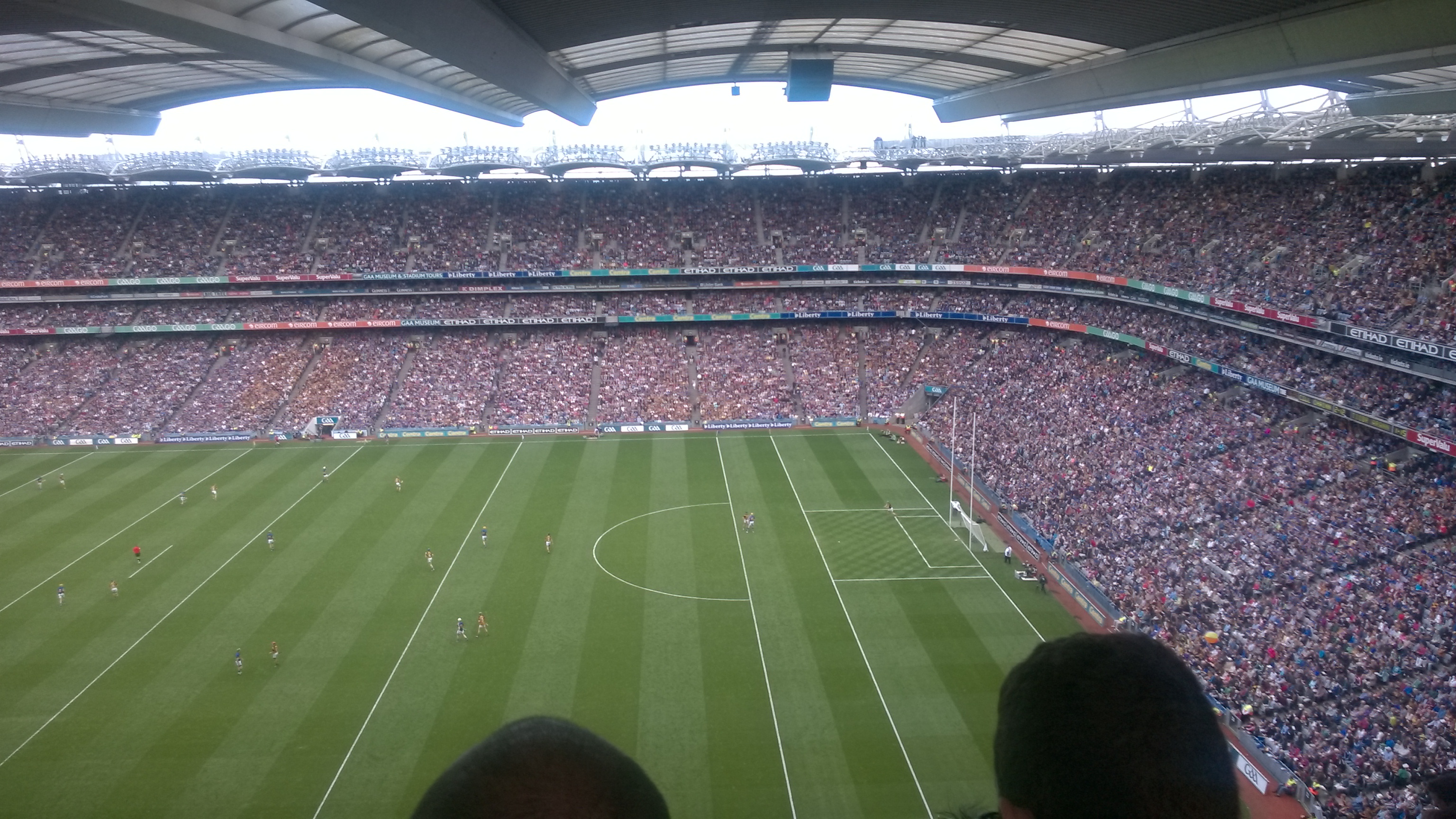 I could go on and on describing the matches, but what really caused me to write about it here was the experience, and how that relates to go-to-market approaches, particularly from two perspectives- competition and advocacy.

Having heard stories (and seen videos) of what can go on in soccer matches in Europe, we were a little concerned.  But once again our friends assured us there would be no issues.  In the stadium (Croke Park in Dublin), fans of both teams sat next to each other cheering their team on, without denigrating the opposition.   It was intense passion, but without the ugliness you often see here.   There were absolutely no issues of fans fighting, verbally or otherwise, with each other—and these were two of the biggest matches of the year.  And the competition was intense.

Technology marketers (and the companies) could learn a lot from the experience.   Rather than “get ugly and dirty”, the approach of intense defending of your strengths and building supporters, without sniping at the competitors, really can help grow your market.  In some ways, the competition for Gaelic sports is other sports.  Delivering a great experience helps sustain the market and grow the fan base.   You’d rather take your family to one of these matches than other sports where things get ugly.

The other aspect of this is advocacy, a favorite topic of mine, everywhere we went, when we told people we were going to the match, they shared ideas of how great it would be and things to do to make the experience better.  Afterwards, the town was buzzing.  A similar effect occurred at the hurling final–but even greater in some ways.  We spent the day before the match in Kilkenny and everyone told me that I had to go see the match and ways to do it to get a ticket without getting ripped off (I ended up buying mine from a guy whose friend was sick at face value several hours before the match).  The GAA (which governs the sport) does a nice job building up this advocacy approach.  Did it hook me?  You bet.  I even ended up ordering several team jerseys after I got back.

Netting it out, three things to remember from this story:

1. Competition can be fierce, but does not have to be ugly.  A more civil approach grows your sport, and market.

3.  If you are into sports at all, and get a change to see Gaelic Football or Hurling, take advantage of it.  You won’t regret it.