A few weeks ago I sat down with Citrix to discuss their upcoming announcements at Citrix Synergy. Due to my coverage area I was very interested in many of the changes made in XenDesktop 7. As many of you are now aware Citrix has completely overhauled this solution and attacked the complexity issue straight on. However a great conversation broke out at this meeting between myself and Vishal Ganeriwala (@VishalG), Director of Technical Marketing at Citrix, that really made the changes in XenDesktop 7 clear to me.

I don’t remember how this conversation started but most likely I was going on my rant about the separation of virtual desktops from session based desktops (VDI vs SBC) a common point of discussion when I’m sharing a table with the folks at Citrix. My argument is that the infrastructure and the OS are very different between these technologies so blurring the market is confusing clients and its why we at Gartner call VDI, SHVD or Server Hosted Virtual Desktops verses SBC (Server Based Computing). In any case, I’m sure I was in the middle of this discussion/rant/argument whatever you want to call it when Vishal interrupts the conversations and says:

Vishal: The architecture behind XenApp has radically changed. All that it takes to setup a XenApp server is just an agent.

Gunnar: So you no longer have 20 dependencies to install it?

Vishal: Exactly. All you have to do is install the VDA agent.

Gunnar: Is this the same VDA that’s used on XenDesktop.

Vishal: Similar, but under the covers there are differences, but its just an agent.

Gunnar: The installation of XenApp only requires VDA… that’s it… In Gartner this is what we call the “ah ha” moment.

I’m not sure if this has been well explained at this conference, in fact the only mention of XenApp was XenApp 6.5. But the fact is XenDesktop 7 is actually XenApp 7. The proof of this is found in the architectural designs Citrix is sharing at Synergy: 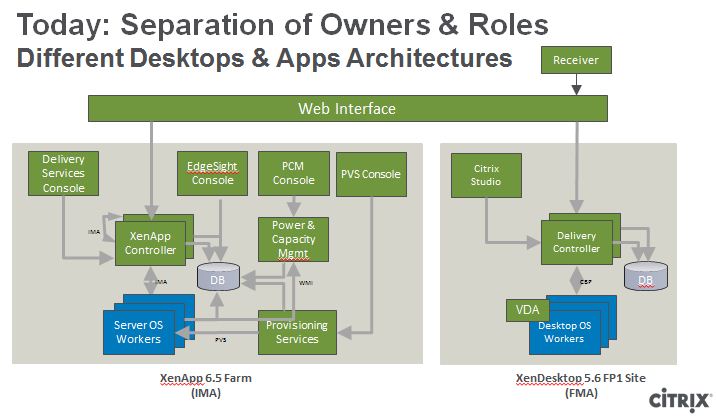 Now take a look at “XenDesktop 7”: 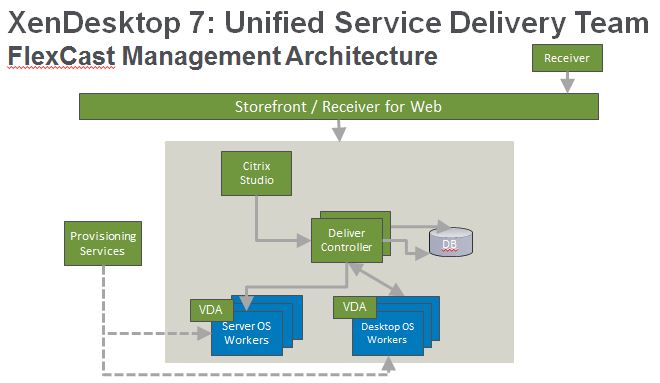 The idea that we manage XenApp or XenDesktop through the same console and we install and deploy these very different solutions in the same fashion, is a major change for Citrix. Its a change every administrator out there should know about. It changes my opinion on XenApp, moving from a very complex solution to something that has the potential to be easy to manage and deploy (I’ll have to play with it more to finalize my opinion on that comment).

To me this moment was lost in the keynote of Citrix Synergy. If I were Brad Peterson, Chief Demo Officer at Citrix, I’d have done a demo of the installation of XenApp and shown that all was required was a single agent. Furthermore I would have made this point of the blending of XenApp and XenDesktop. This is such a major shift in the approach to XenApp it finally makes me question my own argument. Citrix has been blurring the line between SHVD and SBC for a long time. With the advent of a VDA agent for both XenDesktop and XenApp, I feel their argument has some merit .. at least from the software side. The argument on the infrastructure is still valid… just warning you Citrix, I’m not done fighting this battle. 😛