Everyone I know has asked for it and today it’s finally here: VMware has finally shipped a SBC product!

For those that can’t keep up with acronyms let me help you out. SBC stands for Server-based computing… still not following? How about RDSH (Remote Desktop Session Host) or RDS (Remote Desktop Services) or TS (Terminal Services)? Honestly I don’t care what you call it, the deal is multiple users log into a single Windows Server and get a private session. It’s been around for over a decade, it’s what I cut my teeth on in this industry and VMware has finally released a viable product.

So why should anyone care about VMware releasing a product that I just told you has been around forever. For one, we all know by now VDI is not a silver bullet technology. Right now VDI adoption is teetering around 5% of total enterprise market share, and if you are in the group of orgs using it you tend to find a sweet spot of usage for about 20-30% of your organization. SBCs market is much bigger and VMware just entered it… but Citrix created it.

The story goes that somehow in the 90s Citrix has able to secure the source code for Windows NT and they redesigned the OS to support multiple sessions on the same OS. This was typical in Unix mainframes but had never been done for Windows. Microsoft then bought the code back from Citrix and released Windows NT Terminal Services. Microsoft and Citrix spent the next decade being best of buddies.

Over those years many other vendors would attempt to copy the magic that Citrix created, after all Citrix just sat on top of Windows Server so why can’t some startup create a new product that competes with Citrix? Some vendors came and went, others are still around nipping at the heals. Largely though Microsoft itself has pushed to make RDS a pretty good platform without the need of Citrix (I cover this in “Can Windows Server 2012’s RemoteApp Replace Citrix XenApp?” if you are interested). But as far as I know no vendor had ever really created a product that fully competed with Citrix. Instead most vendors took shortcuts that allowed them to create a competitive product that just made RDS a little bit better.

What VMware has done in Horizon 6 is create a true competitive product to XenApp. I’m not talking about every check box under the sun, because frankly, it’s a safe bet that Citrix is going to have a lot of checkboxes (features) for just about every uses case you can think of and VMware will take some time to fill in those checkboxes. The reason I think Horizon 6 is a true competitor to XenApp is that they are the first product I’ve ever seen that has done the leg work to create a 3rd Party Protocol Provider for RDS.

What is a 3PPP, it’s the official way to create a protocol that works with RDSH. It’s how ICA works with RDSH to bring you XenApp, or how RDP works (but RDP wouldn’t be third party). Up until now, any vendor in this space has not done the work to create a true 3PPP interface instead most products I’ve seen have just either used virtual channels on RDP or they’ve done some transcoding of RDP. Let’s take a look visually at the difference in the major products I’ve taken a look at: 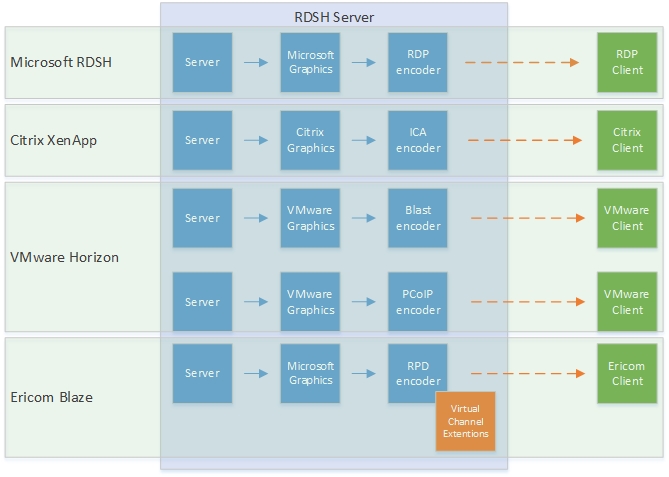 The jist of how this works is that Windows talks to a graphics driver which then takes all the content being created and encodes it into a protocol. Microsoft uses its own protocol, RDP, Citrix uses ICA/HDX, VMware uses PCoIP/Blast, but check out Ericom does:

Microsoft and Citrix own the graphics driver and the can use this information to make sure the right information is passing into the protocol for remote delivery. Maybe I’m being too nerdy here but think about the power you have when you literally have control over the content before its rendered, talk about an efficient way to remote Windows content. VMware has taken this same approach and it’s the approach that I believe will make a big difference for them in the long run.

I know a lot of credit will go to a lot of the new hires at VMware but what I see here is a product that has been a long time in the making. So congrats to whomever it was inside the walls of VMware that stayed the course over some major changes in VMware EUC, and congrats to the new hires that continued to invest in this product. While it remains to be seen just how well this product will compete with XenApp, I’m glad to see that VMware invested heavily to make it a real race and not just another “me too” product.

Congratulations aside, VMware just entered a race that Citrix started many years ago. Good luck to all, and I for one am glad to see a little fire in the mostly ignored SBC market.

PS: After you are done reading this blog on the annoucement take a look at Brian Madden’s Blog, he looks at other details, and isn’t all nerdy about 3PPP like I am.