I take a lot of heat about my view of virtual desktops. I don’t think a week goes by that I’m not involved in some public debate about which should I use RDS or VDI. In fact a large part of my job is in helping our clients make that decision. The long and the short of it is (and this is a fact most people will agree with) you use either of these depending on your needs and use case. The devil is in the details which is why I do a lot of research about this. There is one detail that I don’t talk about too much and that’s my view on RDS over the long haul verse VDI over the long haul.

Today the simple fact is RDS is cheaper than VDI. There are numerous reasons for this; one is the license difference between the RDS CAL and the VDA license required for VDI. RDS also has a SPLA license which makes it easier and cost effective to host RDS applications and desktop from the cloud. Another reason is that RDS scales better than VDI, however I argue that at some point this will be a non-issue for the majority of organizations. There is a saturation point of how many desktops you want on a piece of hardware before you run to high of a risk (too many eggs in one basket), I am a fan of 75-125 users per server myself (the lower the better). So I don’t dig into the scale argument too much, yes RDS will always scale better, I typically only care about this in large environments. The second argument on the cost of licensing is one I’ve been vocal about (#FixVDA) and I’ll spare you another blog on that.

So if you will,  imagine a world where RDS and VDI are very cost competitive, in this world I would lean very heavily on VDI and this drawing is my reason for that: 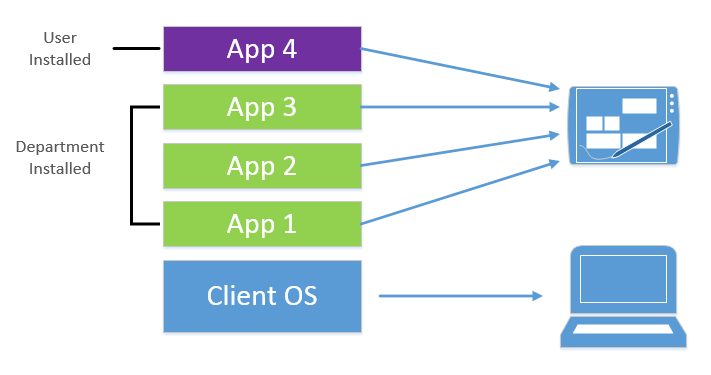 In this drawing I present a list of applications installed on a client OS. The major difference I’m showing is that the application is being seamlessly delivered from that same Client OS. This is a feature that is already available from some vendors but not commonly used. I see some inherent advantages to this:

The point with this madness is that to a user this will be their desktop, they customize it how they want. Admins will be able to take advantage of management technologies (such as application layering) to simplify the management of these devices. Using a fully persistent model makes it even easier to deploy and understand (low learning curve) for organizations that don’t have the expertise needed for traditional VDI.

This may seem like a crazy concept, and it is, right now it doesn’t make any financial sense to do this. If you want to play with the idea I believe XenDesktop 7 can do this however, I haven’t tested it out myself yet. For now, you and I still need to talk about when you should use RDS and when you should use VDI (or when you should use both) but I like this potential future and I really do hope we get to a place where RDS vs VDI is just a decision based on user experience not based on cost.

_________
Disclaimer: As people poke holes in this solution I will change this blog to create a stronger position. I put it out in the public because I like the discussion this brings on twitter and in the comments. As is true in all blogs this subject is just something on my mind it is not an official Gartner stance.