Yesterday was Memorial Day here in the US and like most Americans I sat outside at a BBQ enjoying some amazing weather with friends and family. For reasons I can’t remember I started a conversation with my dad about our first computer, a Tandy 2000. 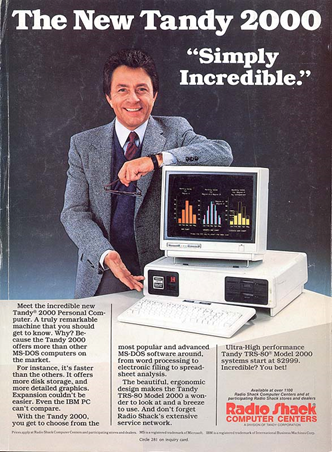 My dad is a former Chief Petty Officer in the Navy, spent most of his time on the Nimitz and I had a few questions about why we had this computer. For one, until recently I only knew my dad welded for the Navy, it was only a few years ago that I learned what he welded: Nuclear reactors. Regardless, I would imagine the pay for a First Class Petty Officer in the late 70’s, early 80’s, wasn’t that much, so when I saw the advertisement above I couldn’t get over that this computer cost $3000 ($8631 in 2014 money). So I asked my dad if it was his job that provided the computer and the conversation went something like this:

Dad: Which computer? I had two.

Me: You had two computers?

Dad: Yes, I kept one in my office at work and another at home.

Me: So you spent over 6k for two identical computers in the 80s?!

Turns out the Navy has a paper trail for everything. As my dad says, “we were always on alert, so it was drill, drill, drill.” Drills have a lot of paperwork and my dad noticed that most of that paperwork was the same, but it was a very manual process of recreating nearly identical paper trails for every single drill. The tools of the day were paper and pen (maybe a typewriter), and as my dad recalls computers were extremely foreign but he had a knack for typing.

Instead of creating a document from scratch that was 90% identical to the last document he wrote, my dad created what any of us today would just consider a template. He then would pull up this template and make minor changes to it to handle the onslaught of paperwork.

“The computer didn’t just put me ahead of the competition, it put me light-years ahead” my dad smiled as he sipped on his root beer. “I had a lot of commanders sucking up to me because I could type and I could get this stuff done now, now, now. The problem was getting access to the computer was problematic because everyone wanted to use the ships only computer, so I went out and bought one for the ship and one for the house. Having a computer at home made it so I didn’t have to stay on ship to get my work done, I could take it home and be with my family, change my clothes and smoke.”

It seems obvious to us now that a computer would be faster than pen/paper/typewriter but this was not obvious in the 80’s when a computer was something from the movies. I think some people around my dad must have thought he was crazy with the kind of money he spent (my dad also admits to me that he just thought it was cool and he liked to fool around with it – now I know where my wasteful spending on random gadgets comes from). My dad just wanted to work better and to have a better work/life balance. What’s crazy to me is this was 35 years ago but this is the same story we hear every day today.

I have talked to many organizations that are still trying to get off of Windows XP. While I don’t think XP is the equivalent of a pen/paper, I do think it shows us what we already know: enterprises today are laggards of technology. I don’t think this will ever change. The most we can hope for is that enterprises start designing for flexibility (in what we call People-Centric design). Instead of designing rigid systems, IT becomes a launching pad for innovation by getting out of the way and enabling their employees.

That’s a much larger ask than most enterprises are ready to embrace today, but as my dad’s story shows, technologies that can completely transform the way we work can happen at any level… even the lowly private.

VMware has some big news for EUC