Tune into: a faceless cloud 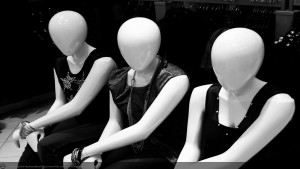 For the longest time, product differentiation, has been the non-plus-ultra for technological oferings, but recently we see – in an sector that is about the same age as the cloud industry – a number of suppliers that are taking a diametrically opposite strategy. The industry we are talking about is the smartphone industry. A sector that – after early attempts such as the Nokia 9000 (the refrigerator) and the first RIM Blackberries (which you could not make any calls with) only really got started with the introduction of the first iPhone. That was in June 2007, just a year after what is now generally seen as the beginning of the cloud, namely the launch of Amazon’s S3 service in March 2006.

But while in the cloud both the leaders at the top of the market and the challengers at the bottom of the market are still trying to differentiate themselves by doing things different from their competitors (adding more features and replacing standard components with possibly premium but for sure proprietary implementations), we see at the bottom of the smartphone market a drive towards ultimate standardization. One by one a large number of suppliers of Android-based phones are installing plain vanilla Android. No special skins, not a collection of bloat ware and no proprietary software what so ever.

For users, this means there is barely any learning curve when changing brands. In addition, updates to the underlying open source software are immediately available – no need to re-apply any of the supplier-specific modifications. Meaning the phone will age much more slowly and thus can be used longer and more productively. Open Source as it was intended. Not only to provide vendors a quick start for the release of a yet again proprietary product, but to offer customers and  end users an interoperable and standard platform.

Selection in this segment of the phone market thus happens more and more based on pure hardware specs. The functionality is by virtue of using the exactly same software exactly the same and also the design is becoming less important for choosing. They namely all have a solid black glass plate with no buttons on the front augmented with a user selected case against drops and damage on the back. Although some innovations – such as wireless charging, fingerprint readers, and dual cameras – may come a year later with these vendors than with the market leaders, the do come typically implemented in a more standard way and at significantly lower cost.

The only question that remains is: Do I take the 8-core, 6″ for $ 95 or a 4-core 5.5″ for $ 50, both ex works and with the latest version of Android preinstalled. BTW the mentioned (indeed very low) prices are not wishful thinking of this blogging gadget freak, but found in the wild prices from reputable manufacturers, even including VAT (or salestax), import and shipping. In reality only the two or three market leaders do not seem to participate in this trend.

The question is whether struggling cloud providers (again everyone except for the two or three market leaders) should consider a similar approach. Not offering their own – albeit open source based – unique cloud solution that with a lot of luck and even more effort may capture just 1 or 2% market share, but instead a 100% undifferentiated on unmodified implementation of a standard platform. A standard platform which – if you add all these “commoditie” suppliers together – might well capture a 20/30% market share and where customers can switch seamlessly between vendors as not only the API but also higher level platform services (such as databases, messaging and container scheduling services) all work exactly the same. A step beyond what we now see with platform as a service frameworks, which, although the framework they started from was standardized (for example by being based on Cloud Foundry) is not really plug- let alone binary-compatible with the other vendors offerings.

If (increasingly struggling) challengers of the industry would indeed take this route then also selection of cloud providers could be largely based on objective criteria such as pure specs, prices, and of course … data center location. The latter is namely rapidly becoming more important in terms of compliance, data-residency and of course existing and upcoming privacy regulations.

Cheap Thrills is likely the most well-known song of Sia, the popular artist that performed at Apple’s most recent recent iPhone Launch (the 10th edition). An artist who has indeed chosen to link her popularity not directly to herself as a person, by making a habit of performing with a standard black and white faceless wig. Someething that has done wonders for her privacy.