Tune into: The dark side of digital 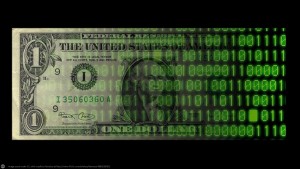 For me the digital age began with the introduction of the CD (a Dutch invention BTW) and I still remember inserting my first real DDD (Digitally Recorded, Digitally mixed and Digitally Mastered) album into my first hard earned CD player. In hindsight we now know that digital – after a brief revival with the introduction of the CD – had a very dark side for the music industry. By providing the ability to endlessly copy songs without any loss of quality the economic model of buying music quickly eroded. And also in the broader economy we are now beginning to experience some of the drawbacks of ever progressive digitization.

One of the symptoms of this is the seemingly endless stream of RIFs (Reductions in Force) at once leading high-tech enterprises. Fortune recently rattled off a seemingly end-less list of tech lay-offs: 5500 at the largest provider of data center networking, 4000 at its equivalent in mobile networking, another 4,700 at one of the world’s largest software providers and no less than 6,500 at a producer of hard disks. And it is not limited to hardware and software companies, also in the area of IT services several historically very stable players are no longer able to escape this trend. And that an industry that most of us still deem to be the “market of the future”. It now seems increasingly likely that a majority of traditional high-tech companies may fail to find a recipe or modus operando for long-term success or even survival in tomorrow’s digital, open-source and cloud-inspired era.

And unlike in the past, these RIFs do not seem to be just a temporary reshuffle of the skills portfolio to the demands of a changing market. McKinsey recently came out with “Poorer than Their parents?”. A report which identified that, while between 1993 and 2005 only about 2 percent of the world population faced declining or steady incomes, that number increased to no less than 65 to 70 percent of all western households for the period between 2005 and 2014. A whopping 65% of all households that experienced no economic progress for years and years on end! And that despite the massive technical progress signified by smart phones, flat-screen TVs, voice activated assistants, electric cars and every bit of information and knowledge – always and everywhere – available on-line.

If these technological advances indeed lead to growth, then that growth is clearly not benefitting traditional businesses and –even more worrying in this context – completely bypassing their employees. One reason for this may be stagnation of the once seemingly endless growth in productivity per employee. Even though – thanks to innovations such as Blendle (another Dutch innovation) – we can all now start our morning much more informed by scanning five daily newspapers and an endless stream of weekly and monthly magazines, it does not necessarily seems to make us more productive. Something equally true for the endless stream of emails, instant messages, pokes, likes and other digital artifacts that (over)fill our days. With regard to productivity, office workers are now losing the war against technology and automation as fast as their blue collar colleagues before them. And the next group of war refugees – the tribe of knowledge workers that most of us will deem ourselves a member of – is only around the corner, with every major tech firm upping the pre-emptive arms race with massive investments in Artifical Inteligence and Cognitive Systems.

Looking for a more sustainable economic model for our (yours and mine) digital future, I therefore started reading Paul Mason’s “Post Capitalism”, especially triggered by its ambitious subtitle: “a guide to our future”. In practice the book feels more as a – very readable – refresher on Marxist theory, including political conspiracy theories and a plea for a non-work-related basic income (Money for Nothing) for everyone, rather than as a practical recipe for full employment and shared economic growth in a fully digital economy. So we continue our search – for example by revisiting the ideas of “Small is Beautifull” economist E. F. Schumacher – for a workable model to understand, predict and of course govern the increasingly Wall-E and Jetson-like future we are all heading into.

Mainly because it would be a distinct shame if a digital “Money for Nothing” scenario would for most of us pan out as “not having a dime to spend on anything”, instead of Mark Knopfler’s original intent of “receiving pay for activities that hardly feeling like work” while listening to an endless riff (but now spelled with double f) of “I want my MTV”.

“Money for Nothing” was the second track on Dire Straights’ first “all-digital” album “Brothers in Arms” in 1985. You therefore can imagine my surprise when I recently saw a remastered version turn up on Spotify. Turned out the original was still mostly mixed using an analog device. Not that my ears were able to register that, for sure not on the type of speakers I could afford at that time. And even now – on the compressed (but free) Spotify stream, I could not point out any significant differences.