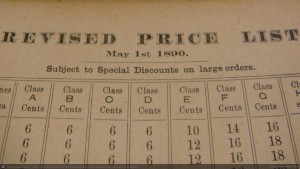 One of the most famous quotes of Amazon CEO Jeff Bezos is “Your Margin is My Opportunity”. This illustrates nicely how in the world of Amazon (and in the words of UK’s pop idol Jessie J*): “It’s not about the money³, we do not need your money³, we just wanna make the world dance!”

In the cloud this – a bit unworldly – attitude is fairly normal. Think of Facebook buying WhatsApp for about $ 16 billion, only to make it available for free to large parts of the world via Internet.org. For more traditional competitors this kind of “semi-philanthropic” way of doing business takes some time getting used to.

Indeed, companies like IBM have been working diligently to improve their profit margins, quarter after quarter and year after year. Divisions that could not make the cut towards achieving double digit margins were divested, one might say without mercy. At IBM we saw this with first the divestment of the PC division and not much later the x86 server division to Lenovo, while internally more and more emphasis was put on the much more lucrative software area.

Although SaaS at first glance seems very similar to software, profit margins can be substantially lower. With traditional software – after recouping the initial development costs – any additional sales goes almost directly to the bottom line. Almost, as the cost of delivery (formerly 10 cents for a CD or now 1 cent per download) and of course the cost of sales still have to be subtracted. Cost of sales however typically do not get measured in cents, as many software companies employ senior sales staff (on equally senior compensation plans) or sell through partners, who need and expect significant sales margins. And then we did not even take into account any cost of marketing yet.

On the other hand, the significant costs customers typically incurred after buying software (acquisition of hardware, middleware, paying for implementation and installation services and off course ongoing operations cost and support fees) all came from the customers budget. These were not included in the license fees of the software vendor and thus did not impact its margins. With SaaS it’s a different story.

When a SaaS vendor gets successful and sells thousands of user subscribtions, he must arrange compute, storage, network and (hopefully also some) backup capacity for all those users from his own pocket. The margins may still be better than on the typical sale of  hardware (with Apple as the significant industry exception), but the cost of all this can quickly add up. And – perhaps contrary to what many believe –  SaaS does not sell itself. SaaS requires comparable sales and marketing effort. So the move to SaaS won’t really help traditional suppliers to preserve their margins, let alone increasing them.

Meanwhile the margins of traditional outsourcers and hosting providers are also under increasing pressure from the cloud. In traditional outsourcing and hosting deals the cost for hardware, licensing (middleware, databases, management tools, etc.) and for manpower, typically each accounted for about 30%, leaving a reasonable but not enormous theoretical margin of 10%. But cloud providers have a very different cost structure and are not averse to adjusting their prices accordingly. First, cloud providers define service almost exclusively as self-service, which saves them a significant amount of manpower. And also the delivery of anything requested through these self-service interfaces is largely automated (a one time development investment of which the cost quickly approaches zero at hyperscale). And also paying significant fees for commercial licenses and management tools is not in the vocabulary of most pure-play cloud providers. They prefer to use open source, or if that happens not (yet) to be available for a certain area, they are perfectly happy to develop it themselves. Finally, also in terms of hardware, it is a different story. Hyperscale providers are typically eligible for hyperscale- discounts. And more importantly – thanks to their scale – they can drive their hardware utilization levels to unprecedented heights.

By that time the theoretical 10% margin of traditional service providers has already largely evaporated, even if these hyperscale cloud provider maintain a fair – but not huge – margin on their offerings.

* “Price Tag” (2011) is a number of British singer-songwriter-performer Jessie J, who millions saw perform live during the closing ceremony of the Olympic Games in London, which coincided with the first official reunion of the Spice Girls, a group which – unlike today’s artists – could still live from the sale of CDs.

PS This column published in Dutch at Cloudworks.nu on April 16th, a week prior to the Amazon’s earnings announcement in which it for the first time broke out Amazon Web Services revenue, operating margins and investments.