Of these 10 most hated jobs, how many did you have?

Earlier this week Yahoo Finance ran an article on the 10 most hated jobs (based on a survey asking hundreds of thousands of employees at a major career site).

What amazed me most – apart from the large number of IT jobs, including the top one,  making the list – was that I personally was employed in no less than five of these . Now you may think: “What a miserable career that must have been!”, but to be honest, it never felt like that.  Sure I can relate to some of dissatisfiers that people listed, such as a lack of direction from upper management (actually described for one of these jobs – guess which one – as “employers are unable to communicate coherently, and lack an understanding of the technology”). But overall I had good fun doing most of my five. 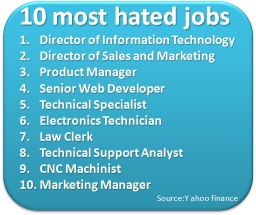 In fact, some of my other jobs – although fun at the time – would have been more logical to make the list. As a student I was a part-time restaurant worker (even though my parents insisted the only job I was doing part-time was studying) and when that restaurant burned down I spend 3 months rebuilding it as a construction worker (hard hat and all).  Both of which did not make the list.

Now this survey is not about IT and does not even mention cloud computing, so why discuss it here?
The reason is that with cloud computing lots of job roles will be changing and there is an opportunity for all of us to think about which aspects of our current roles we like best (and which we hate most). So we have these clear in our mind while venturing into this new world.

On changes at the macro and organizational level –beyond cloud –  Mark McDonald  just published a series around  “Thinking Small” (It is time for IT to ‘THINK small’,  Thinking Small — Creating value rather than controlling costs , Thinking Small — Thinking value) and a piece called Re-Imagine IT, Lead from the Front  (a preview on the CIO experience at Orlando Symposium).

But also at the micro level we can do our share in re-imagining our job roles. Cloud computing – with its “as a service” delivery mechanism – may add some degrees of freedom to what can be imagined. Not that it will eliminate some of the less loved aspects of our jobs by having for example: EaaS for doing our Expenses as a Service, RaaS for doing our weekly Reporting as a Service and MaaS  for attending mandatory Meetings as a Service (although the idea sounds pretty cool). But cloud may enable us – also as individuals -to focus on what we are best at and on where we add the most value (which often seems to equate to having the most fun – or at least to getting the most recognition).

Scale (and particularly large scale) is certainly an important aspect of cloud computing, but let’s hope for (and work hard on) keeping our jobs at a human scale. Just like the way we apply our laptops and tablets is not impacted by having  1 million or 1 trillion transistors inside, the scale of the cloud should not impact how closely we work with people. In fact, the efficiencies of scale that cloud computing brings, may allow us to be even more granular and differentiated (a.k.a.  customer focused) at the local level.

Personally I recently did my evaluation and took the opportunity to make a switch (and yes, am having fun!). Meanwhile I am observing my kids’ early (part-time) exploits into working live. First conclusion they reached is that restaurant work definitely beats a paper route (better hours) and restocking super-market shelves (more degrees of freedom). I am still working on getting them enthusiastic for any jobs involving IT (or clouds, for that matter). Not sure this top 10 will help.