As Gartner CEO Gene Hall stated in this week’s Symposium conference opening keynote, the ‘Nexus of Forces’ trends (mobile, social, cloud and information) will drive the need not only for new skills, but also a new kind of leader. At a breakout workshop immediately following the keynote, CIO attendees explored how leadership will be impacted along with which specific skills, if further honed, will enable them to capitalize on the business innovation opportunities at this nexus.  The highlights of workshop were captured graphically as a wonderful example of communication. 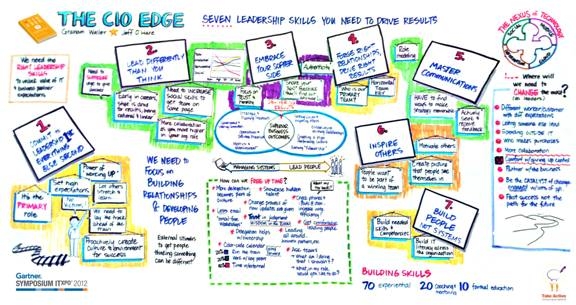 The top themes from the CIO workshop attendees who explored the question, ‘what is the most important way your leadership needs to change given the Nexus of Forces trend?’, included; giving up traditional ‘control’, enabling others to step-up and lead, adopting a more collaborative leadership style and forging new levels of business partnership. A further pattern that emerged  was that the paradigms on which past success have been built will not be the path to the future.

The workshop used ‘The CIO Edge; Seven leadership skills you need to drive results’ as a backdrop, then asked the attendees if they had to pick one skill to invest time, which one would  help them be more successful given these trends? The most picked skill, by some margin, was the ability to ‘forge the right relationships to drive results’, particularly horizontal peer business and external relationships. The second most cited skill was ‘build people not systems’, developing not only the next generation of the IT Leaders, but also building IT literacy across other business partners with a focus on how the nexus of forces can transform the enterprise for business or mission advantage.  Indeed one CIO commented that the workshop sparked the realization that the critical role he now needed to play was that of ‘Innovation Ambassador’.

I would love to hear your ideas, feedback and questions regarding which leadership skills need to be elevated to enable CIOs and IT leaders to both survive and thrive in the digital economy and nexus of forces.  Carpe diem.

Freeskilling – a radical rethink to close the talent gap

Remaster Your Leadership with Six Personas Fit for Digital Business

Digital to the Core – Mind the Leadership Gap