Cried King Richard III, in the battlefield of Bosworth.  At least, according to William Shakespeare.   Was it the fact that there were no more horses on the battlefield?  Apparently not, as his loyal councilor Catesby offered to find another horse.  Was it that Richard was completely incompetent with that horse?  Not according to Shakespeare, who wrote that Richard had slain 5 of the Richmonds on the field of battle prior to his lament. 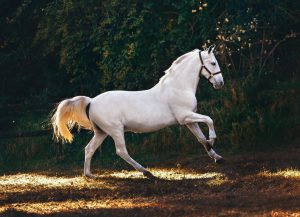 So why the wail that has subsequently been used to point out the contradiction of offering something as vast, powerful and profitable as the potential Kingship of England in exchange for a something as common as a horse?  There are times when a horse is just a horse.  It’s a means of conveyance, a working tool, a pet.  However, there are times when a horse can be a symbol of something much more significant, or when the horse is a trusted companion that has seen your best and worst of days.  It allows you to take a higher level view of the landscape and make better informed decisions with quickness and authority.   There are times when the Mission Critical Priority for a leader is so important that the leader needs every advantage available.  A good horse, a trusted counselor, a robust system to evaluate what is happening right now and to support the effort; these can be just as important as the kingdom itself.   To quote another great literary work, “A horse is a horse of course of course”.  Unless, of course, it is.… something more.

In the play Richard II, Richard does die in battle without his horse, and does lose his chance to rule the kingdom.  Shakespeare paints it that the good guys won the day.  The dramatics of the Shakespearean play amplify the “good vs. evil” plot line, and who is to say that it is not as clearly defined as Shakespeare makes it out to be.   “History is written by the Victors”, and all that.  We were not there, though my teenage son thinks I’m old enough to predate written language.

It is my privilege to be on the team researching and writing the Magic Quadrant for Cloud ERP for Product-Centric Enterprises.  For many of you reading this blog, ERP is your Mission Critical Priority, and you are actually the good guys.  It is not lost on us that the research we provide can be instrumental in choosing which capabilities you will engage to navigate your business for the next 10-20 years.  Your ERP will be your horse that you ride either into battle or into the sunset.  It may be as important as your kingdom itself.  To that end, we take our mission seriously, to present you as much research as we can to help you find your “horse”.