I always enjoy these first couple of weeks in August when things ease off slightly due to the European and North American summer holidays, and  deadlines are less urgent than the rest of the year. And because of that, it gives me a chance to do the things I’ve put off ‘till next week’ or even a couple weeks ago!  So  one of things I’ve been doing this week is taking stock of how things have gone in the ERP market so far in 2018, and how we’re tracking for the rest of the year.

But first, where have we come from? Well 2017 was a pretty good year for the ERP market where we ending up at $31 billion in total software revenue (that’s 11% growth on quite a significant base number). And a large part of the story here is that many vendors are starting to scale their SaaS revenue to the point where its overtaking the traditional license and maintenance revenue base.  We’ve written a more comprehensive analysis here but I’ve snuck in a summary of the top 5 vendors below. 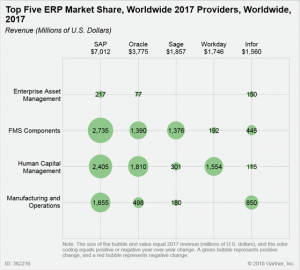 So where are we going? Well the good news is despite economic concerns such as Brexit and various trade wars brewing, we still see the ERP market as a solid and buoyant market. And we expect at least mid to high single digit growth again by year end. Some ‘sign posts’ we look at include the publicly traded vendors out there. For example in June, Oracle’s Q4 earnings release cited 50% growth in Fusion ERP and HCM SaaS Cloud. Cornerstone OnDemand (an HCM vendor which forms part of our administrative ERP coverage) this week announced subscription revenue growth of 22% for the first half of the year. SAP meanwhile posted software growth of 2% (a mix of high growth in cloud revenues counterbalanced by declines in license and maintenance). There’s more earnings to come, but so far it’s not looking too bad despite the macro-economic environment.

Can we near the 10% growth mark again and reach $34 billion? We’ll be back later in the year to see how things continue to shape out.