Ever wonder what could have led to this picture? 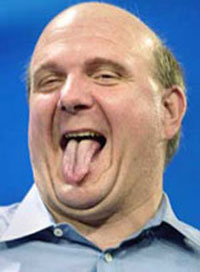 Steve Ballmer will be our Symposium 2013 Mastermind Interview again this year, likely for the last time, at least as CEO of Microsoft. Having done a few of these over the years, its’ a good time to remember some of the highlights. There were so many like the time I found a toy called the Balmerang at Disney and gave it to him. And the endless back and forth between him and Scott McNealy of Sun (who was also a frequent Mastermind interview). But for me, one that sticks out was the one from the year 2000. Not so much for the moment but for the longevity of the moment which was captured in a photo (yes I’m pretty sure it was analog). I’m referring to the above – the famous and iconic picture of Steve with his tongue out. I have been promising people I would post the part of the video that led to that so I finally dug up the VHS cassette (wow the world has changed since then, Windows XP was still a year away and you could fly to Orlando and bring shampoo with you (and yes, I even needed it back then:-)). Tom Austin and I had the pleasure of doing this interview and we asked about a lot of topics, including what was the biggest issue at the time – the potential breakup of the company by the US DOJ. He answers one of those questions with that famous facial expression. We put it on the front page of the Symposium Times (at the time we distributed a dead tree edition all over symposium). It was picked up and used extensively and for years. Enjoy!

I have enjoyed these moments with Steve as has our audience. We wish Steve the best in the future. This year my colleagues David Cearley and Tiffani Bova will be grilling Steve. Here’s hoping for another great Kodak moment!