The Windows 8 saga continues.  Nary a day passes when there isn’t some new rumor or opinion, Microsoft is giving hints as to what its near term successor, code named Blue, will be, but has not provided any concrete details.  I offer an artist’s rendition of the new desktop screen: 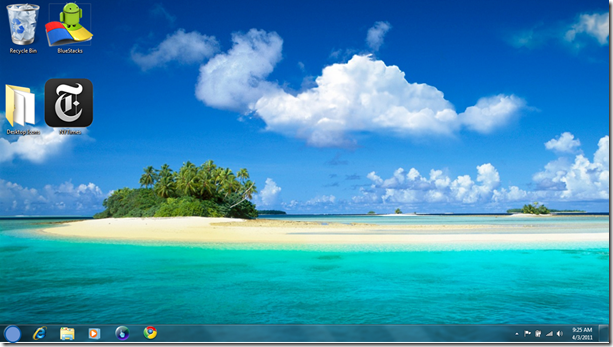 Of course, this is not real. It’s a crude attempt at my first thought of what Blue will be.  I will also offer an artist’s rendition (e.g., opinion) on what it will actually be as well. I actually made this doctored screen shot a few months ago when first whispers of blue surfaced. Of course, the keen eye will notice the blue dot where the start button used to be.  That was my somewhat tongue in cheek thought at the time.  The start button issue has been discussed ad nauseum, but it is a symptom of the problem, not the entire problem.

When I first started hearing about Windows 8 way before details were made available, I thought it sounded like a good idea:  An excellent Windows 7 made even better, with an add-on touch interface based on the Windows Phone tile interface (still known by most as Metro, despite it not having an official replacement name).  I envisioned a coexistence and transition similar to how Microsoft moved from DOS to Windows in the Windows 3.1/Windows 95 timeframe. You will recall that transition took many years, and for much of it, Windows was a separate product – licensed and installed separately on top of DOS.  Hardly a forced, quick push.  And it took off as a platform when Microsoft itself demonstrated value by having its own excellent GUI applications (e.g., Office) available.

With Windows 8, Microsoft correctly assessed the impact of tablets and the trajectory of the PC market and absolutely had to do something huge. And they are going to stick with it.  Metro is the strategy – as my colleague writes here. When Steve Ballmer a few years ago at Gartner Symposium said that his biggest bet was the next version of Windows, few grasped at the time the truth of that statement. Its so important and the apps for it are so needed that Microsoft decided to force users to the new interface fearing that inertia would keep them tied to the past and that Windows would be relegated to be legacy.  However, removing of the start button is part of the issue. It has removed choice and empowerment of its users.  This is the issue.  They may have been ok had it been impeccably done (as Apple often does when it is pushing people certain ways).  But the jarring (that’s the word many use to describe it) experience of going between desktop and Metro modes has hardly been described as positive.

The sense of urgency is admirable, but misplaced. Rather than push users to the new interface, Microsoft would be better served pushing themselves internally to deliver Metro versions of Office and other applications that showcase the new capabilities.  Not only would users potentially use them, but they would be the proof point for WinRT and Metro that the company needs.  Nothing demonstrates the value of a platform more than apps from the company providing it.  It demonstrates commitment, possibilities, and is one of the most important things in success of a platform.  Thus far the Microsoft supplied Metro apps have been less than stellar, and the new version of Office, while good, does not leverage Metro and has led to the company keeping the desktop around for its dedicated tablet (e.g., ARM based Windows RT systems) when it might be better off without it.

Today the media is full of stories about how Microsoft is about to do a U-turn on Windows 8.  I don’t expect that. What has been actually posted by Microsoft looks like nebulous statements about ‘listening to customers’. A good start, but light on details.

I expect an option to allow booting to the desktop. And some kind of ‘start’ button returning to the desktop. What it will do is not clear. Rumors are that it will be yet another method to invoke the start screen. And 7-8” form factor support. If the new desktop start button is just yet another way to get to the Metro start screen, then this will be so far from a U-turn as to be a No turn.  What is needed is not yet another way to do that – the old start menu and boot to desktop would go a long way towards putting Windows on the right path. But the real positive would be Office on Metro.

Windows 8 has been described as Microsoft’s New Coke moment. Some may think it is not appropriate (and I do not advocate the U-turn that some have suggested), but I do think course correction is warranted. And Microsoft should want the analogy to be a good one eventually.  After all, Coca Cola is in a better place now that it was right after the introduction of New Coke.

A reminder that this blog is my personal opinion – not a formal Gartner position.