Here we are a week ahead of my interview with Amazon AWS CEO Andy Jassy at Gartner’s Annual Symposium and I got to thinking about Amazon’s search for a new HQ. Well, everybody is thinking about that so I figured since I live in Atlanta Georgia, I would throw in my 2cents, hoping for 5 billion in return.

Andy, if you read this, please tell Jeff before the October 19th deadline.

Yeah, baby. Let the word roll around on your tongue. Taste the cinnamon flavor that bursts from the name as the Irony of the fact that the words Atlanta and Amazon are only “tlant” minus “m” degrees of separation from Atlantazon to begin with. Gnaw on the sweet wordplay…

…well, enough of that. If you’re still reading, I know the question that is now buzzing in your head.

What the hell is Atlantazon? 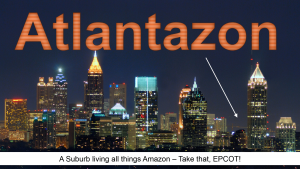 Well, every city in the running is touting its obvious advantages related to what Amazon wants. Atlanta is no different. Yeah, we have the world-class brain-filled Universities like Ga Tech, Emory, Morehouse, and Ga State just waiting to pour talent on your next innovation. Yeah, we have the MARTA mass transit, the busiest airport in the world, and a rising tech corridor with the likes of GE, Coca Cola, Home Depot and Anthem hanging out at our pool parties. Yup, we have the large diverse population you really need to cultivate. And; the cost/quality of living ratio is strong. I mean, paying to live good here is about the same as you would pay to live IN your pool in places like New York and Toronto.

Everybody has an offer. But what none of them have, so far, is an offer with soul. That’s Atlantazon.

Imagine a small community, situated within or just outside the city limits of Atlanta (one thing we got here in Georgia is land and suburbs coming out our ears, so finding a spot wouldn’t be blowin’ up a storm or nuthin’ – oh, that’s southern for “it won’t be hard”).

Let’s get back to imagining. It’s a community where every house, business, and person would be dedicated to living an Amazon lifestyle. Remember when Walt Disney first started talking about building a real city that was an Experimental Prototype Community of Tomorrow (E.P.C.O.T.) down in Florida? Everyone would live the technology in harmony with their jobs and their environment. It didn’t work out like he dreamed but it spurred a whole new way of thinking about how entertainment, culture, technology, and the future could be brought together into a lifestyle.

Well, what if Amazon did that in Atlanta? Atlantazon would be a cultural mecca for Amazon’s vision of the future. Atlantazon would allow Amazon’s relentless focus on the customer and on consumers to blossom into something more than products, services, and revenue generation. It could blossom into a dream for how technology becomes the infrastructure for a new civilization.

Digital technology is the new civilization Infrastructure. It ain’t the roads no more. It ain’t the water system or the sewer system. It ain’t even the electrical grid. No. Now, civilization infrastructure is digital technology, used to tie people together in order to create a high quality life value system. Digital platforms will allow us to handle video like Netflix (Amazon Elemental), scale our businesses without needing data centers (AWS), to leverage robots that we can only imagine (Amazon robotics), and to talk to machines (Alexa and amazon AI). In short, digital infrastructure can allow the rest of us, to perform like the best of us.

And, remember this. Technology, in all its new flavors is one of the biggest change motivators in the lives of people and how they work. We can no longer ignore or avoid its impact. As a digital leader, Amazon is in a position to bridge the gap between driving technology impact and showing how that impact SHOULD affect our lives.

Just look at the whole slate of announcements Amazon flung (southern for “threw”) at us today. They are replacing the land line and phone with Echo connect, replacing our alarm clocks and our TVs with Spot, Fire, and Show, and they are vying to become the only smart home hub any of us need (See Tech Crunch’s take for more on this here). Amazon’s ecosystem, continues to grow.

So, why not create a place where people can experience the technologies in the context of how and where they live, work, play, and learn – all the time. In that place there would exist the ultimate customer and cultural experiment. It would provide an unprecedented level of responsiveness to the dream of tomorrow. It would let us learn how all of this will work – in real time – in real life.

Residents of Atlantazon would live with Artificial Intelligence virtual assistants 24×7. They would talk to their machines and have their children trained to teach and then work alongside those same machines. Their Alexa would wake them up and tell them how to prepare breakfast and guide them on the road in their new BMWs. They would buy from a common Amazon marketplace. Atlantazon residents would shop in local GO stores and perform re-orders using dash buttons built into their homes. In fact, their homes would be designed as Internet of things (IoT) platforms to cross the boundary between the virtual and physical world.

Atlantazon residents could use cryptocurrencies for local business driven by an Amazon AWS based blockchain. They would watch movies and television streamed from Amazon prime video while following along on a Kindle Fire as a second screen to get behind the scenes information about the movies they are watching. Their advanced educations would include developing solutions for serverless architectures and elastic data. And, they would work as flex drivers or perhaps fulfillment center participants as part of a logistics chain second to none.

There are countless things they could learn and experience living in an Amazon world – and no limits to what Amazon could learn from them. That’s where the soul part comes in (echos of Sam and Dave – or the Blues Brothers if you prefer – singing the song “Soul man” waft through my head). Having soul is about an attitude. It’s about an attitude that drives a way of behaving.

In Atlanta, we experience the soul of a diverse culture rooted in southern tradition but sprouting a modern incarnation of life. It is a culture quite different from Seattle and large swathes of North America and Canada. It is a culture that looks back and sees how its history forms a mandate to lead the way into tomorrow by showing people can live together and take the rough with the smooth. Atlanta holds the key to the next generation of technological ingenuity. It is a place filled with experience, and conflict, and talent and a belief that we still “have a dream today”.

Atlanta is a perfect place to build on the notion that an HQ2 will bring something DIFFERENT to Amazon.

Atlantazon. That is the word and that is the idea. It is an idea whose time has come. It is an idea worth considering to add to the decision process for where Amazon’s HQ2 will reside. It is an idea that ties customers, culture, talent, and technology into a bundle of capabilities so we can see how they survive practical reality.

I hope it still tastes good on the tongue. It should, because I forgot to mention the food. Atlanta is the cradle of good southern cooking and it’s all waiting for you, Amazon – Chicken and Waffles included.

Yes, Watson, There IS an Alexa/Cortana Clique

“Digital BizOps”: A Philosophy of Business Operations in the Digital World

3D Printing: The Good, The Bad and The Ugly