The style book says that, before going into the subject that one wants to talk about, it is convenient to write a few introductory lines to give context to the reader. I don’t think you need much introduction or context on this matter, so I’ll skip the orthodoxy. Instead, I will start with a comment that you might consider minor and irrelevant, but I grant myself the privilege of talking about it and, after all, you always have the privilege of valuing or despising it. I want to call this crisis simply a “pandemic” and not a “war”, as many politicians and the media are calling it. Words shape our minds. An entire generation will be shaped by this pandemic, its consequences, and the words we use. Let’s be careful. Today’s children will be tomorrow’s citizens. Warlike words generate warlike actions. We are not soldiers in a war fighting against enemy soldiers. We are citizens in a pandemic fighting against an unknown virus.

And the virus has caught us climbing the Maslow pyramid. Most of the population was halfway between the 3rd level (sense of belonging and love) and the 4th level (respect and self-esteem), some people were already in the 4th, and a handful of Earthlings had reached the 5th and maximum (self-actualization). And, suddenly, this black swan called the SARS-CoV-2 coronavirus (COVID19 is the disease, not the bug) mercilessly pushes us down to levels 1 and 2, those of basic needs: concern for our livelihood, for our health and for physical security due to the collapse of the health system. 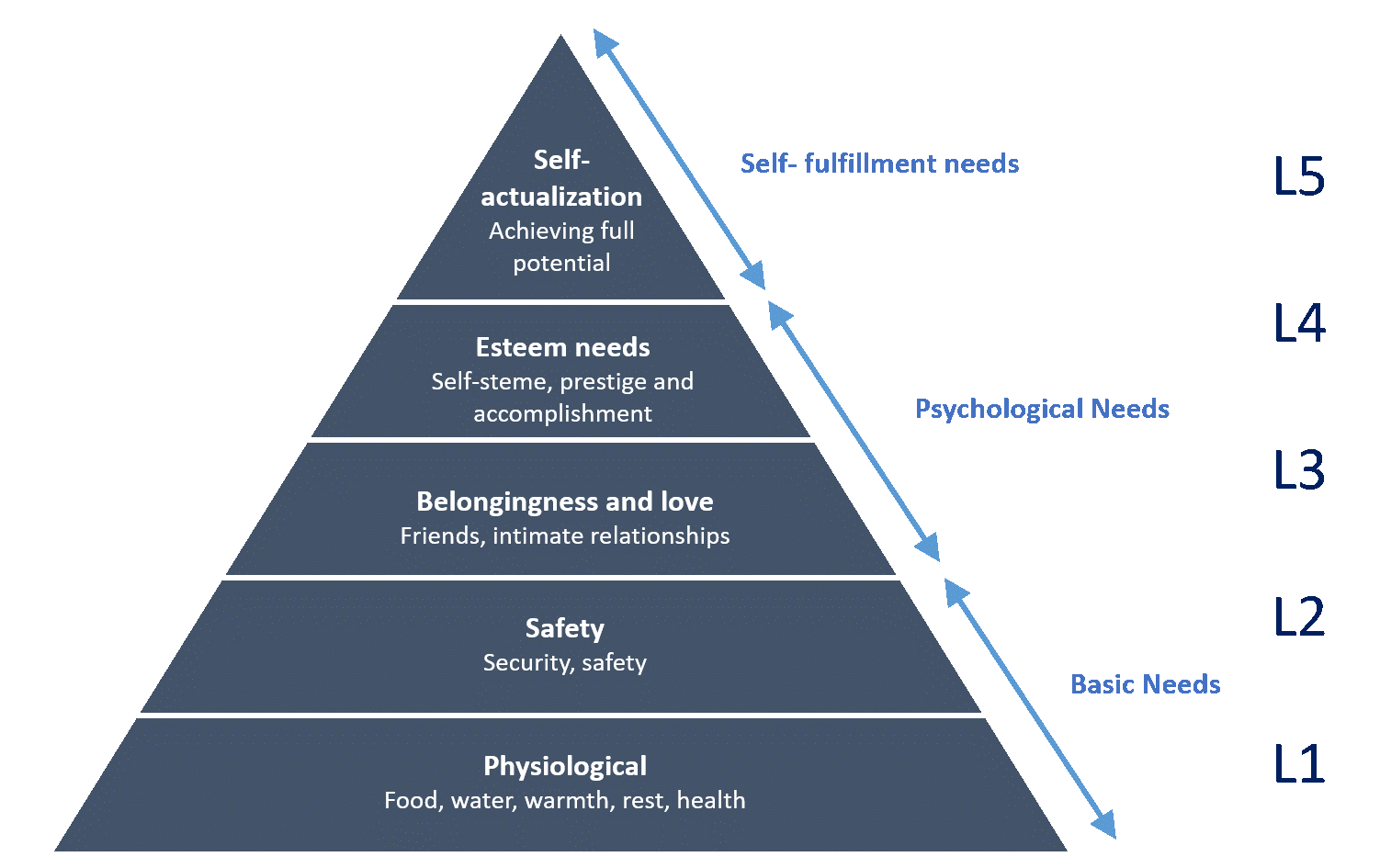 I want to remind – because it is not trivial and it is key to the predictions that will follow – that this COVID is the third in the last 20 years with activity on humans (on animals there are a handful of other varieties). The previous two (SARS and MERS) did not have the extremely high contagion capacity of the current coronavirus, although they did cause a higher degree of mortality, reaching 50% with MERS. The whole family of coronaviruses seems to have in common that they either kill due to their activity or due to their high contagion capacity that collapses the health services. And, although speculative and without any alarmist spirit, it seems that the most reasonable thing is to be aware and prepare ourselves for the arrival of another strain in the near future.

In this context, I have identified five predictions for the immediate future and a risk to consider. The duration of the current pandemic crisis will determine the intensity with which these predictions will be fulfilled and with which the risk will materialize (the longer, the more intense).

Prediction 1: Rediscovery of the “sense of tribe”

The local “tribe sense” (country) will reinforce, since what one does individually – confinement, social distance, reinforced hygiene – affects the rest, both what is done well and what is done wrong. The global “tribe sense” (planet) will also reinforce. The solution will be global or it will not be: we need the community on a planetary scale to apply policies -in borders or international transport, for example- that lead to the utter eradication of the virus. The exchange of material and human aid between countries has also proven to be an accelerator of the solution and a brake on global misfortune.

Some regions already have cultural advantage in the “tribe sense” (Scandinavian countries, Africa, Asia in general and Japan in particular). Now the rest of us are waking up to that reality. And after weeks of confinement – mandatory in some countries, recommended in others – we will have definitely woken up relentlessly. The sense of belonging to a planetary collective (beyond my city, my country, my continent) will reinforce and international cooperation will increase.

A derivative is going to be the fight against climate change. At last my generation, the X, and its predecessor, the Baby Boomer, who both today hold the political power, are going to apply much more severe preventive measures. Now, finally, we are going to do it! Why have we taken so long? We, X and Baby Boomers, are generations who sold our youthful dreams for money, because the power of dreaming in a better tomorrow was less sexy than the power of money in the current today. And here we are.

Prediction 2: Strengthening of the Welfare State

Since the neo-liberal policies in the 1980s, the “public” concept has been widely demonized in liberal democracies. More and more resources have been withdrawn from health, research and education, leaving hundreds of millions of citizens unsheltered from the “public”.  This reached its peak after the 2008 financial crisis. The “precariat” was born – workers with precarious jobs who are poor despite wearing a tie or suit jacket. The middle classes have narrowed and the lower classes have expanded, with 1% of the world population accumulating wealth equivalent to what the remaining 99% need to live.

But now, in the most difficult moments of the pandemic, we have realized that it is the resources of the State that make the difference between life and death. It is the health public services that, well dimensioned economically and peoplewise, are relieving us of this nightmare.

Countries that already enjoy a social model based on the Welfare State are going to strengthen it. The minimum threshold for public spending will increase, with all parties in parliaments accepting a higher, indisputable and undisputed threshold.

Those countries that do not have a Welfare State model will adopt it in one of its versions. Specifically in the USA, where the ill-fated Obama Care (wide extension of health services to the population) was knocked down by the Congress, most likely will be reconsidered again with a much kinder look to it, because COVID19 will likely plunge them into the worst humanitarian crisis since World War II.

The reluctance to widely implement remote work in our companies is a consequence of leaders’ unfounded fears. “If I don’t see my team I can’t trust they are working.” Control mindset. The pandemic has turn remote work into a virtue: if we want to keep our operations alive and kicking, whether we are a private or public company, we must work remotely.

When executives realize that remote work not only generates more work (1 hour more on average a day) but increases the levels of commitment due to the flexibility in work-life balance it provides, they will gradually lose their fears. If you are an executive, think about this: what difference does it make to work more intensely in the morning, in the afternoon or at night -each one adapted to their biorhythms and their family or social needs- as long as they meet the objectives you have set?

And remember that remote work is not just handing out a laptop. You must define the “rules of the game” whereby everyone wins: among others, define the time frame in which everyone has to be available to hold relevant meetings and make decisions, respect the family and social needs of each person, establish a “virtual cafeteria” to maintain team spirit.

Many companies will apply a hybrid model (remote and physical work). I estimate that,  in the post-COVID19 society, 30% of the average working time will be remote.

Some derivatives will be: reduction of pollution in cities, greater work commitment and therefore greater employee loyalty.

In times of pandemic -or potential pandemic- companies that aspire to survive must inevitably think about digitizing their distribution and sales channels. Online commerce will become a much more widespread option and accepted by all generations. The brands that until now were reluctant to do so because they wanted to power the physical presence of customers in their stores, will have to adapt. We will probably be less inclined to massify shopping malls in order to keep social distance – this will depend on communications from health authorities about the probability of the arrival of a new virus – and we will give a higher weight to online shopping.

The difference between an internal country/company crisis and a global crisis is that the latter requires leadership that, firstly, is not dubious about making difficult decisions with sensitivity towards people; and second, that has the capacity to influence beyond its local tribe, that is, the global tribe.

This will apply to both business and politics. We will vote looking for that ingredient of good crisis manager in the verbal and non-verbal language of the political candidate, and we will grant greater authority in the company to people with the profile of credibility, determination, and at the same time human sensitivity, that crises require.

Imagine that your neighbour is wearing a biometric wearable (t-shirt, underwear, bracelet) connected to the health authorities, so that if his vital signs (temperature, blood pressure, etc) indicates a potential infection due to the pandemic disease, he is quickly identified and forced to confine himself at his home so as not to contaminate the rest. It might seem acceptable to you, right? You would even find it acceptable for your own self because you are a reasonable person and aware that you are also a neighbour to the rest of the tribe.

However, imagine now the dystopian version, in which that wearable is also used, without your knowledge, to identify your movements, where you were on that day at that time, what movie you watched, who you went to have dinner with that day (remember that everyone  wears a wearable so it would be easy to know), and then that information is sold to whoever wants to pay for it – your government that wants to know your affinities to infer your political ideology, your company to control your movements, your partner on suspicion of infidelity, etc-. Would you accept it? I guess a resounding “No!” is drawn on your face. I regret to say that there are sociological studies that prove you are not right. When levels 1 and 2 of the Maslow pyramid are at risk, we are willing to accept loss of freedom in exchange for gaining security.

Do not doubt that something like this will come (I mean biometric control). We will have to find creative ways to avoid sacrificing one of the two – freedom vs. security. The most effective formula will be to define a very strict and guarantor legislation, the strictest and most guarantor as possible, where citizens are equipped with the tools and laws through which our governments, authorities and organizations feel more controlled by us than we are by them.

May wisdom and courage be with you.
Daniel Sanchez-Reina
—
I will be looking forward to talking to you. Feel free to schedule an inquiry call (inquiry@gartner.com), follow me on Twitter (@DanielSnchezRna) or connect with me on LinkedIn.

Listen, IT Leader: Tool to Assess the Effectiveness of Your Team’s Culture for Your Company’s Digital Ambition

Discover how a global IT company leveraged analytics to radically...

Adapt HR Processes to Unlock an Agile and Responsive Culture

Learn how progressive organizations are unlocking a responsive culture and...