This is the second one of a series of 3 posts about the cultural pitfalls between Western Executives and their Chinese stakeholders. 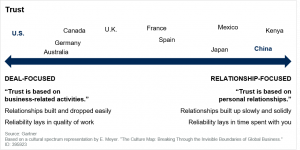 Deal-focused cultures build trust through business-related activities. If you work well consistently you will make yourself reliable, and people will want to work with you because they trust you.
Relationship-focused cultures build trust through the personal bonds that you create with your interlocutor over meals, drinks and informal chats. These relationships are built slowly over time and are very solid.
In relationship-focused cultures, it is important to establish a good personal rapport before reaching any professional agreement. In fact, that agreement will likely not happen if you don’t nurture first a personal relationship. The more to the right of the spectrum, the higher this trait is. U.S. and many European countries are at the other end of the spectrum, so it will be a hard nut to crack if you are not culturally used to it. If you want to establish a fruitful relationship based on trust with Chinese people, spend personal time with them, show interest on their personal life.

Learn How to Show Disagreement

As you can see, China is at the very end of the nonconfrontational side of the spectrum.
As an exception, Chinese people can be confrontational as long as the level of hierarchy is the same, but they will not be so with someone they know or with someone above them in the hierarchy.
If you want to keep a good relationship with them, especially if the hierarchical level is the same, you have to focus on trust as we mentioned in the previous section, to minimize the out-group effect.
You will not get your Chinese audience to express their ideas openly in a group meeting, particularly if there is somebody upper in the hierarchy in the room, or someone with higher seniority or age. Disagreeing publicly is viewed as disrespectful.
If you want to learn more about practical recommendations to overcome these cultural pitfalls,  see “5 Cultural Pitfalls that Western CIOs Should Avoid With Chinese Stakeholders”.
May wisdom and courage be with you.
Daniel Sanchez Reina
—
I will be looking forward to talking to you. Feel free to schedule an inquiry call (inquiry@gartner.com), follow me on Twitter (@DanielSnchezRna) or connect with me on LinkedIn.

Learn why you need to adhere to composable enterprise architecture,...