This is the first one of a series of 3 posts about the captioned topic.

Despite political and economic turbulence between the U.S. and China, Western firms’ acquisitions and company creations in China are increasing, as is the trend of high-skilled tech talent moving from China to the U.S. and Europe. Be thoughtful about some cultural pitfalls with Chinese stakeholders.

LISTEN TO WHAT IS NOT SAID 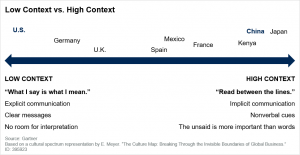 Develop tactics to counter these myths, putting yourself in their shoes about how they see you. It will help you counter those perceptions and improve the relationships with your Chinese stakeholders.

The difficulties inherent to communication styles pose even more challenge when it comes to Western executives giving feedback, particularly negative feedback, to their colleagues, teams or business partners in China.
Direct, negative feedback is provided honestly and bluntly. Negative messages are clearly posed, and absolute descriptors like “totally inappropriate” or “completely unprofessional” are used.
Indirect, negative feedback is provided diplomatically and subtly. Negative messages are sandwiched between positive ones. Descriptors are much softer, such as “sort of inappropriate” or “slightly unprofessional.”
Countries with low-context communication tend to give negative feedback in a direct way, while high-context ones tend to give it in an indirect way. There are a few exceptions to this rule for some countries, but in the case of Western countries and China, the general rules prevail.
The following graphic shows the culture spectrum of Negative Feedback: 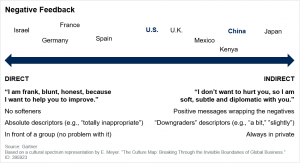 From the U.S. and Europe perspective, negative feedback is not intended to be offensive, but a sign of honesty, transparency and respect for the person receiving the feedback. However, seen from China, it can be considered offensive and disrespectful, no matter if given in private or in public (but much worse in public). Take it into account in your conversations with your Chinese stakeholders.
If you want to learn more about practical recommendations to overcome these cultural pitfalls,  see “5 Cultural Pitfalls that Western CIOs Should Avoid With Chinese Stakeholders”.
May wisdom and courage be with you.
Daniel Sanchez Reina
—
I will be looking forward to talking to you. Feel free to schedule an inquiry call (inquiry@gartner.com), follow me on Twitter (@DanielSnchezRna) or connect with me on LinkedIn.

Create a Culture of IT Smart Spending

Avoid One of the Worst Enemies of Remote Work: Micromanagement

The Field Guide to Infrastructure Automation

Join this complimentary webinar as Gartner for Technical Professionals expert...