by Craig Roth  |  August 9, 2017  |  Comments Off on Children’s Book Tech Review: Can You Survive an Artificial Intelligence Uprising?: An Interactive Doomsday Adventure

Readers of this blog may be familiar with my Tech Reviews of popular movies such as “Star Wars: Rogue One” and “Her “. But this is my first review of a children’s book. I was alerted to this book by my 8 year old son, who told me last week that he saw a book at the library called “Can You Survive an Artificial Intelligence Uprising?: An Interactive Doomsday Adventure“.

I figured he was joking; that he made it up because he’s seen the work I’m doing around automation and AI. No, it’s quite real. And I instantly knew I had to read this book!

My first impression came from the cover. In my recent posting “Which Robot-proof Jobs Should My Kids Major In ?” I recommended “Tell your children ‘Don’t run away from robots. Run towards them'”. Well, someone forgot to tell this girl because she’s clearly not following my advice! 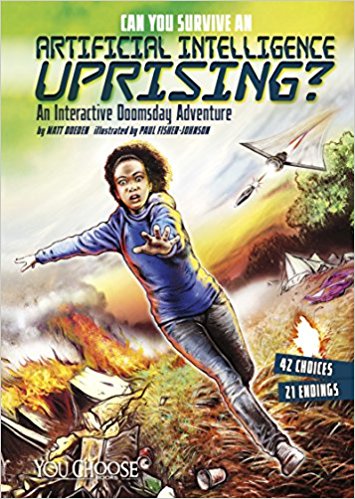 The premise of the book is that you’re the child of two “leaders in the field in artificial intelligence”. Turns out those leaders helped create AI that cut the human population from 10 billion to 45 million. From there it’s Terminator redeux, with ragtag bands of humans trying to survive against intelligent machine baddies.

A clever feature of this series is that the reader gets multiple choices to pick a path in the narrative (“To try to build yourself a life alone in the wilderness, turn to page 90”). I was intrigued that there are 21 possible endings. Great – I love scenario planning! It’s a time-tested approach for organizations dealing with large amounts of uncertainty. Unfortunately, (*** SPOILER ALERT ***) almost all of them result in doom and gloom. They often end with phrases like “You spend your final moments with the horrifying knowledge that you just doomed the human race. THE END.”

I’ve been generally positive on AI, but in case I’m wrong this book offers helpful sections on “Ten Things to Remember During an AI Uprising” (such as “Get off the grid” and “Be careful who you trust”) and how to create an AI survival kit (sample items: binoculars to spot enemy robots and a powerful magnet for wiping hard drives).

OK, I am being a bit cheeky with this review (although every quote above is real). I understand the context of these books (others in the series include zombie apocalypse, storm chasing, and the generic “dystopia”) and that it’s for entertaining kids while encouraging reading. That’s all commendable.

But I am serious about the dangers of treating a technology in a way that could result in kids keeping their distance from it instead of embracing it. Most other titles in the series are either horrors or harsh natural environments, not potentially beneficial technologies.

I already see adults influenced by what they read about AI based on some survey results (others show no fear). “Impact of AI, Robots, and Automation on Jobs: Tracking the “Hyperbole Cycle ” showed my analysis of the hyperbole being used in popular press articles about AI, robots, and automation. Headlines since 2016 contained “kill” or “destroy” in 33 out of 296 articles. That’s just for the adults. I’d rather not start scaring the kids as well.

A section at the end (“AI: The Real Story”) acknowledges that “many leading researchers and engineers say the idea is pure fiction”, but dedicates more time to the Hawking and Musk warnings.

I don’t know how AI will turn out. I don’t think the idea that AI in some distant future could cause us harm is impossible.

But I know the real life ending has not been written yet and many choices lie ahead. It’s my opinion that the chances of a happy ending – for enterprises and society – are increased by more engagement with AI so we can continually shape its course as it evolves rather than by avoidance or draconian control.

AI probably won’t get really interesting for another decade or so, so today’s 8 year-olds will be critical in determining whether AI will be a boon to or the bane of humanity. It may take several positive interactions with AI, robots, or automation technology to balance out each apocalyptic story. And, per my hyperbole study, it’s getting tougher to find those positive headlines. It’s too fun (and too valuable as click-bait) to paint the negative view. This book is indeed a fun thriller, but if your child reads it then follow it up with a robot kit or workshop, some quality time with a voice assistant like Alexa or Siri, and a coding camp.

And, just to be safe, slip a magnet and pair of binoculars into their backpacks on the way out.

Craig Roth is a Research Vice President focused on cloud office suites, collaboration tools, content management, and how they are being impacted by digital workplace and digital business trends...Read Full Bio