I’ve been noticing how articles about how AI, robots, or automation will impact the future job outlook all seem to reuse the same terms, like “disrupt”, “steal”, or “threaten”. The thesaurus has only so many terms to go around I suppose. I got to wondering which terms were most popular, and then how they’ve changed over time.

So I ran some queries on Factiva. Factiva is a business information and research tool owned by Dow Jones & Company. My goal was not as much sentiment tracking as it was hyperbole tracking. By hyperbole I mean the breathless, panicky articles that tend to track progress. The worst of them bet on winners (few and unworthy) and losers (all of us!), cherry pick the most extreme studies that seem to prove their point, and extrapolate long straight lines from nascent trends.

Just as Gartner tracks the hype cycles of technologies, there is a “hyperbole cycle” for scary technologies. I first noticed it covering “enterprise attention management” (a more actionable, business-focused version of the “information overload” meme). 2004-05 seemed to be peak terror about digital distractions making our caveman brains explode. A term hits the mainstream with “sky is falling articles”, they acquire academic cred as long time academics whose work connects to the narrative find sudden fame, then counter-articles appear popping the bubble, and finally it settles into a low buzz.

Which brings me back to my current work on how organizations can planfully adopt and vendors and service providers can responsibly sell AI, robotic, and automation technology. I wanted to see how the terms associated with these technologies has evolved in headlines over time. I searched for all headlines since 2013 that involved the term, work/jobs, and AI/robots/automation (and variants – see Boring Details below). I used a scale of terms from the neutral “transform” (which could be good or bad, and doesn’t make a statement about losing your job) to “kill” (’nuff said). The result is shown below. Lighter colors are more neutral terms, where the darkest shades are for “destroy” and “kill”.

To simplify the tracking I grouped the terms into 4 levels of sentiment, shown below. From here it seems we are getting over the hyperbole curve, with “lose with malice” terms peaking in 2014, giving way to simply “negative change” 2016 and 2017. 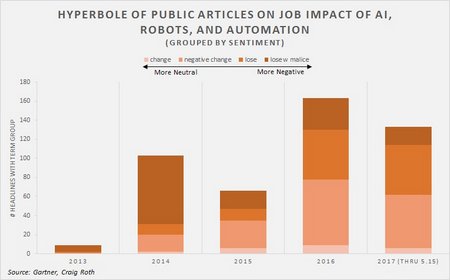 My last chart here is a pie chart of all tracked terms in related headlines since 2013, from most neutral and, going clockwise, getting increasingly negative. For the whole period, “steal” is the most common term, with “lose” being second. In third is “risk”, a decidedly more neutral sentiment. 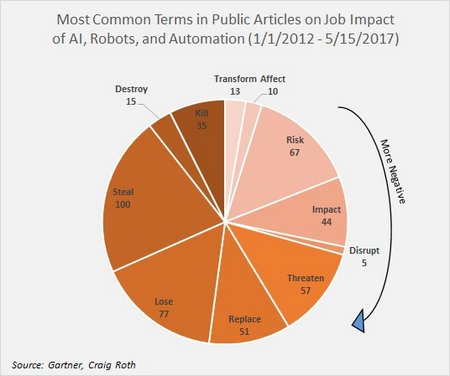 If you want to hear more I hope to see you at the Tech Growth and Innovation conference (June 19 – 21, 2017 in Huntington Beach, CA.) where I’ll be presenting on “Selling Robots and Automation to a Fearful Public”.

Democratization of Technology: Yes, There Is Something New Under the Sun