Give Me the Upper Left Corner of My Screen Back

Over the last ten years there has been an assault on the upper left corner of GUI windows and screens and I want to take them back.  It’s a fact – the human eye scans from upper left to lower right.  But the standard windowed interface pegs an increasing amount of tooling at the top of the screen.  It started with menus, then extended to toolbars, address bars, ribbons, tabs, and small forms.  I say let’s stop this nonsense and allow clean-screen freaks like myself the option to remove this minor, long-term bit of fatigue by giving ownership of the upper left corner of screens back to the workspaces that contain our content.

To see what I mean, check out the screen shot below.  To get to the content workspace I’m editing, my eye has to find a floating point about 90 pixels in and 150 pixels down and remember it.  Sure, our eyes adjust – they learn to ignore redundant banner ads or fancy frames.  But if you can clear it away you notice how you feel a bit less fatigued and a bit less likely to feel the urge to stop writing and manipulate your content instead (save, bullet, format, color, etc.).  It’s like a little bit of noise that you didn’t really notice, but you feel a bit better when it stops.  By the way, also notice the icons from my desktop, which Windows allows to auto-arrange from the upper left only.  I want my recycle bin pegged to the lower right corner. 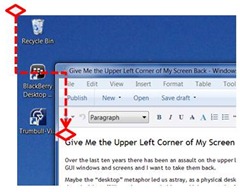 Maybe the “desktop” metaphor led us astray, as a physical desk is usually ringed with stuff like a phone, pen holder, and inboxes at the far edge and sides.  But with a real desk, those fade to (or beyond) your peripheral vision as soon as you hunch over papers to work.

An online equivalent to that metaphor would be fading and/or blurring non-workspace items (menus, toolbars, items outside the window) once you started typing or scrolling.  A painter’s easel is a better metaphor as it has a white canvas filling the field of focus, the painter’s palette down below, and infrequently used brushes off to the side on a table out of view.

My request is to UI designers (fat client and web), and especially to those creating the APIs leveraged by UI designers.  Like Microsoft.  I think Microsoft is mostly to blame here due to their influence on common practice, if not invention.  They make certain GUI layouts easier or harder (or much harder – try coding the ribbon to be at the bottom of a window) in the Windows APIs, and set expectations and the path of least training through the design of all the Windows built-in admin screens and apps and Microsoft Office.

Why would Microsoft (and others that follow in its UI footsteps) want to own the upper left corner?  First, it makes intuitive sense when first using an application with a blank workspace.  So it strongly rewards first impression at the expense of future usability.  Second, the toolbars, ribbons, and forms taking that valuable space are advertisements for all the great stuff you could do but don’t think about.  Arguably, that could benefit users who learn better or cooler ways to do things.  But I don’t want ads – 99.999% of the time I’m just trying to get my job done, not learn new features.

It’s been so long since users owned the upper left corner that they’ve forgotten how good it felt and aren’t asking for it back.  So I’m asking on behalf of users everywhere: give me the upper left corner of windows and screens back.  That could be with “clean-screen” views (like in Word or F11 in Firefox) or allowing toolbars and such to be moved to the bottom (as with the taskbar in Windows).  Those are a few good examples, but unfortunately there are many more poor ones.

Craig Roth is a Research Vice President focused on cloud office suites, collaboration tools, content management, and how they are being impacted by digital workplace and digital business trends...Read Full Bio