The intent of the Hype Cycle document type is to map “innovations” in technology and processes against a consistent framework and curve, to determine just how hyped a given technology is, and how it is proceeding through a series of phases on its way to either niche status, abandonment, or mainstream adoption.

While Edge Computing itself is a hyped term, and is itself reflected on the Hype Cycle, many of the technologies and processes involved in delivering Edge Computing are in fact established and proven in other contexts, such as Cloud Computing and Hyper Converged Systems.  Others, such as Machine Learning at the Edge, reflect newer capabilities that can stand independent of Edge Computing, that WITH Edge Deployment, can be applied in new ways.  Still others, such as Management and Orchestration Stacks for Edge Computing, are inextricably tied to Edge and will evolve in lock step with Edge success or failure. The fact is, Edge Computing is actually being implemented today in many of our clients’ environments, generating revenue, saving money, improving safety and customer experience, and enabling entirely new applications and data models.  Simply put, Edge has moved from concept and hype into successful vertical industry implementations, with general purpose platform status approaching rapidly. But Hype and confusion still persist. 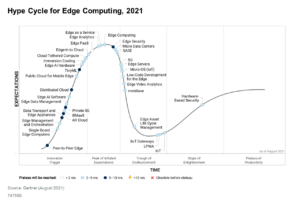 The State of Edge Computing.

The state of edge computing has evolved a great deal since last year’s Hype Cycle, driven in part by aggressive adopters using edge computing to respond to the pandemic through agile business designs. The hype has grown along with it, affecting the edge computing innovation profile’s fairly static position on the Hype Cycle curve.

Providers are “going vertical to go horizontal” to jump-start the market, while the market for broader adoption of horizontal capabilities across all industries evolves more slowly. Providers are focusing on specific technologies and implementations in specific verticals, while general impediments to edge computing deployments, such as security and data management, are moving through the hype cycle more quickly than in previous years.

Paths to edge computing implementations range from “build your own stack” to those built by a systems Integrator and business-outcome-based edge-computing-as-a-service solutions. These second two paths reduce complexity, risk and time to deployment.

In the long run, data is king. The combination of edge data aggregation and analytics and cloud access for scale-up capabilities (such as analytics and model training) will create a new economy built on digitally enabled edge interactions.

That’s it for this week. Next time, we will look at the relationship between horizontal capabilities, which describe Edge-enabling technologies and processes, and their application to specific vertical industry problem statements.  In other words, the thoughtful genesis of Edge Computing Use Cases.

Notes From The Edge: So What IS The Relationship Between 5G, MEC, and Edge Computing?