I once wrote an article while at AMR Research that called out four of our top supply chain analysts. The angle was simply that of the top four contributors, three were women. I was surprised and a bit disappointed at how little anyone seemed to care.

However, times have changed and the push we at SCM World have put on this issue seems to marshal a lot more interest today. For three years now, we have hosted standing-room-only full-day events to explore what’s being done to improve diversity in supply chain. We maintain a dedicated research thread on the topic and are always looking to build the momentum wherever possible.

None of this, however, means much without real role models for those entering the field. The list below, which calls out four who sit on SCM World’s Executive Advisory Board (EAB), is a start. 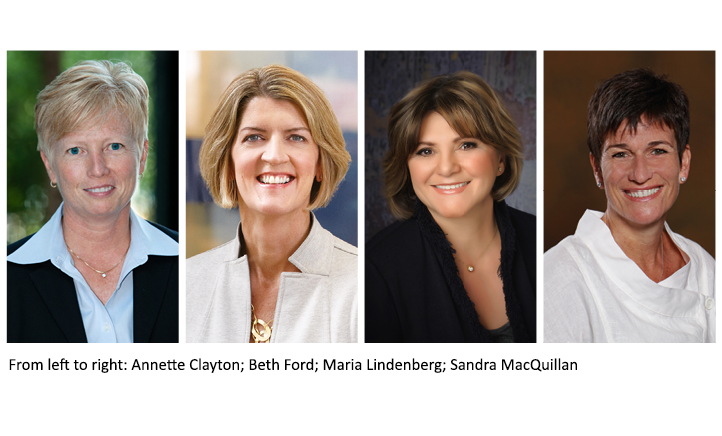 Annette Clayton – Annette is well known in supply chain circles. Having led a radical and successful transformation at Dell, Annette set a strategic standard that many in supply chain are still following. Her career started in the notoriously tough world of automotive, with more than 20 years at General Motors including executive roles in production, engineering, quality and even as President of Saturn Corporation. Recently named President and CEO of Schneider Electric’s North American operations, Annette still serves as the company’s Chief Supply Chain Officer.

Annette has been a huge contributor to SCM World, actively participating in EAB meetings despite a brutal time-zone penalty dialling in from Asia. She is also instrumental to our growth, as a mentor to our own Matt Davis who worked for her at Dell.

Beth Ford – Beth is EVP and COO for Land O’Lakes, with responsibility for supply chain operations from farm to customer including R&D and IT. Beth is also the spiritual heart of SCM World’s efforts on gender diversity in the profession. Her experience runs deep and spans a crazy range of industries. On top of that, she makes the time to shape education for the future with board seats at both Columbia and Iowa State universities.

Not one to tiptoe around a sensitive topic, Beth once took me firmly to task for an aggressive post I wrote about Hachette (where she ran operations). What impressed me most was her ability to be hard as nails one minute, but then move on to work together as friends the next. If only all leaders had this agility and integrity.

Maria Lindenberg – Maria is the Chief Procurement Officer for Chevron, controlling $46 billion in annual spending. As a graduate of Arizona State’s supply chain programme, Maria is in good company with dozens of other top sourcing executives from the Carey School of Business. As CPO, Maria was central to a recently completed project of massive proportions – the Gorgon Project off the northwest coast of Australia. This six-year effort is the largest single resource development in Australia’s history and a complex web of partnerships, both public and private.

Maria has always impressed me as a powerful person who manages to project extraordinary humility. Her mind is flexible, clear and results oriented with the best possible combination of practicality and precision. I appreciate having had the chance to learn from Maria.

Sandra MacQuillan – Sandra is the first ever Chief Supply Chain Officer at Kimberly-Clark Corporation. As a CPG veteran bringing many years of experience from Mars, Sandra was handpicked to establish a board-level role for supply chain at KCC. This includes not only establishing an operating strategy, but also building a team capable of driving change in a challenging time for the industry.

For me personally, Sandra is a huge inspiration combining world-class professionalism in the job with extraordinary empathy. She is always, as the song says, “touring the facility and picking up slack”.

These are just a few best-in-class women in supply chain. They’re role models we can all look up to, who having reached these positions of power by very different routes, prove what’s possible.

By the way, the four I flagged in my original AMR Research article were Lora Cecere, Debra Hofman, Mickey North Rizza and Noha Tohamy.

The Social Organization: Recognize and Evolve

Learn the main strategies that supply chain leaders use to...