Tim Cook, of course. Better than Steve Jobs, even. It may seem unkind to make such a statement with the halo currently surrounding the Apple founder’s new biography; even Cook himself might have a different view. And yet, in the last four years, Apple has seen nothing but smashing success. Steering away from the temptation of merely building up on Jobs’ legacy, Cook is achieving what very few others can: keep winning at the top.

Tim Cook joined Apple in 1998, quitting a job at the then market-leading PC maker Compaq after talking to the inspirational Steve Jobs. That the two computer companies’ stories diverged so radically from then on may be coincidence, but maybe not. As anyone who knows consumer electronics can attest, supply chain makes often the difference when it comes to who survives the short, sharp battles typical in this vicious sector. 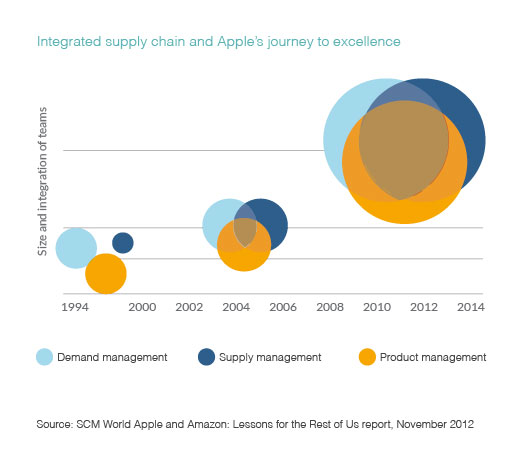 Prior to Cook’s time at Apple and under Steve Jobs’ visionary leadership, the company was a financial and operational mess. No one doubted its marketing edge or product design genius, but quality was bad, availability appalling and costs out of control. It’s hard to remember now, but Apple was a niche player in a plateauing industry. Cook changed all that.

Was Jobs not a genius until the late 90s? Original Apple lovers will say no, he was always a genius. And yet, with the Genius gone for over three years now, the value of this company continues to rise.

It is the supply chain breakthroughs pioneered by Cook that explain these numbers. Ultra-deep supplier collaboration is one thing Cook brought to the table. Foxconn, Intel, DuPont and plenty of other companies bent over backwards putting their best people on Apple’s business, which starved competitors of talent.

Total vertical integration is another counterintuitive supply chain innovation that has worked. From silicon to storefront, Apple has removed volatility in its global sourcing, manufacturing and delivery network. Demand uncertainty, which was killing the business in the 1990s, is largely eliminated by controlling all levels of the value chain and using the mega-launch (Jobs owns this one) to force a supply-demand match in time and place.

And of course, digital supply chains which “ship” product electronically in the form of apps, iTunes downloads and such. Consumers buy identical items from a very limited assortment of SKUs and yet they experience a product that is highly personalised. Apple’s inventory turns blow everyone else off the map and its sales per square foot of retail space are unmatched, mainly because they know how to use the digital supply chain.

There’s plenty more, but my point is simply that Steve’s genius, while beyond question, may never have been truly appreciated without Tim Cook. And in terms of what a CEO owes the shareholders, it’s about financial performance more than inspiration.

Innovation and the road ahead

Critics insist Cook will drop the ball on innovation, and yet the really big moves he’s making promise massive shifts in human behaviour. The watch could be a mere fashion statement, but more likely it’s a lifestyle inflection point and new era of wearable computing power. Similarly, Apple Pay could be just a convenience, but I’m betting it will be transformational to point-of-sale market making. And lest anyone forget, Apple TV sits quietly in a corner ready to disrupt the crappy relationship most of us have with our cable provider.

If Cook were a bad CEO, he’d insist on doing something different to make a statement. Or maybe he’d sit idly by while people followed the echo-leadership of a ghost. Or maybe he’d blow all that cash on stupid acquisitions. But he’s not. In fact, he’s a better CEO than Steve Jobs.

It Takes an Ecosystem

Complexity is a Reality, But You Can Tame It

The Top 6 Supply Chain Breakthroughs of 2020

The sixth annual Gartner Power of the Profession Awards recognize...