What a rotten week for Uber. First, it was blindsided by Transport for London’s (TfL) decision not to reissue its operating license for that city, a market worth 5% of the company’s global customer base. Then, in a battle over regulations with the provincial government of Quebec, Uber opted to walk away (for now) rather than accept stricter rules. Finally, a class-action suit filed in California alleged investor fraud for concealing the truth about the company’s internal workings, which the complaint describes as “a toxic hotbed of misogyny, sexual discrimination, and disregard for the law that threatened the company’s reputation, business and prospects.”

Image cleanup operations at Uber are no doubt working in overdrive just now. New CEO Dara Khosrowshahi is apologizing, compromising and reengineering the company’s culture as fast as possible in hopes of arresting its free-falling valuation. It is not a pretty picture, and if past experience is any guide (think Enron) it could get much worse now that the feeding frenzy has started.

The biggest mistake supply chain leaders could make right now, however, would be to paint the whole concept of “uberization” with the same brush that we’re using on former Uber CEO Travis Kalanick. Sharing economy business models, a.k.a. uberization, are booming, and prospects for continued expansion look excellent.

Preliminary 2017 data from our annual Future of Supply Chain survey confirms a steep growth trend of acceptance in practitioner circles that sharing economy innovations are disruptive and important to supply chain strategy. In fact, the share of supply chain professionals worldwide who view uberization favorably has increased more than fourfold since 2014. 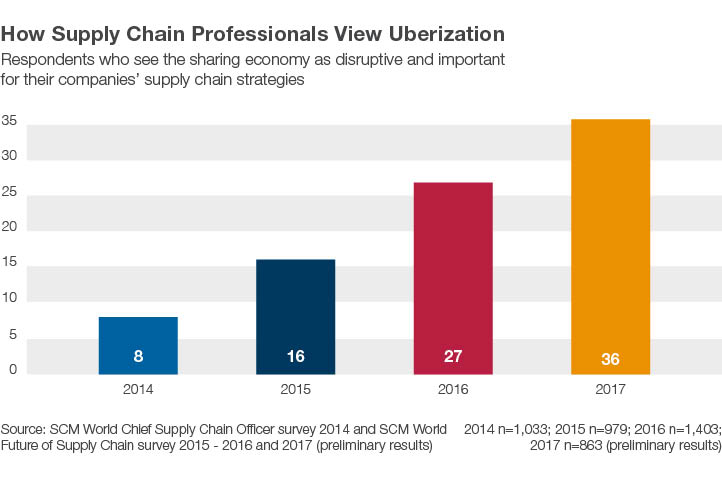 Cutting the aggregate data by industry sheds some light on the still surging interest in uberization for supply chain strategy. Fifty-two percent of Logistics and Distribution company respondents call the sharing economy important to their strategies, the highest of any industry group. In part, this reflects the obvious extension of the Uber model to trucking and warehousing.

From a purely economic perspective, however, the easy crossover rests on an extraordinarily efficient mechanism for matching volatile, momentary demand for relatively commoditized assets and labor with supply in a high-visibility, open market. As consumers we experience this through an app that instantly shows availability, lead-times and prices with the added comforts of geoposition tracking and driver identification. As professional users, the value of this technology is irresistible in logistics.

Extending the logic from logistics to manufacturing, sourcing and even specialized analytical services in supply chain are natural. Imagine, for instance, swapping the GPS feature that’s so valuable in transport with IoT capabilities, such as manufacturing-equipment sensors that assure product quality in uberized manufacturing, or with blockchain capabilities, which could guarantee provenance in uberized sourcing. The possibilities are thrilling.

Uber’s problems are mostly self-inflicted wounds. It was stupid to cheat and offend an entity as powerful and important as TfL. It is also insane to give consumers (or drivers) any reason to switch when alternatives like Lyft are just an app download away. And, frankly, if all we needed to make things right was some contrition and a few policy changes, this could all be written off as growing pains and idiosyncratic hubris.

Unfortunately, the thorniest issue of all remains unresolved, and that is the classification of drivers as contractors rather than employees. Europe, which scores lowest among all regions in its collective enthusiasm for Uber, tends toward aggressive labor regulation. The temptation, especially in times of political fury, might be to gut this critical enabler and thereby kill the sharing economy in its cradle. 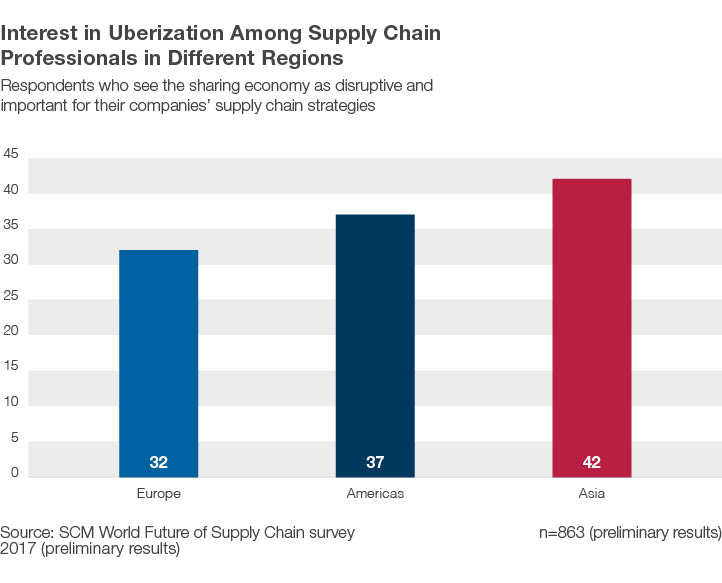 Contractor status for providers is essential to this model, based as it is on rapid market making and auction-driven price setting. Removing this element would create huge barriers to entry for sharing economy startups, and could hamstring participation by anyone with spare capacity in their supply chain network.

Uber’s bad behavior has jeopardized the sanctity of contractor status by drawing the attention of governments at a critical moment. It may be worth supply chain leaders’ time to speak up on this matter, or risk backsliding on something we clearly want as part of our toolkit.