Semiconductors are behind the scenes and embedded in everything around us. From farm equipment to defense industries and the cloud computing that runs daily operations for businesses. Where do those semiconductors come from? A little more than 60% come from Taiwanese companies.

Taiwan has 90+% market share of advanced semiconductors (<7nm), and TSMC (a Taiwanese-based company) has the majority of that market. When compared to the top producers of oil where the United States is No. 1 with 20% share, followed by Saudi Arabia (11%) and Russia (11%), advanced semiconductor manufacturing is a geographic monopoly for the time being.

Since the U.S. Speaker of the House visited Taiwan on Aug. 3, much has been happening in cross-straits tension. China grabbed headlines by demonstrating a military capability to effectively blockade the island, but this is not a one-off demonstration or incursion. China has been challenging Taiwan through air-surface-cyber incursions, trade barriers and propaganda for years. These activities are evidence of a long-term strategy with the ultimate goal of reunification.

If China instigated a serious event that isolated Taiwan, how would this impact the semiconductor supply chain? The result would have significant negative impacts not only for the world, but China as well.

In a recent Gartner Chief Supply Chain Officer poll, we learned that half of those responding thought that there was a greater than 30% chance of a serious disruptive event that would isolate Taiwan. And 66% said that if one were to take place, it was more than 2 years away.

Beyond engineering and design lies the equipment used to make semiconductors. Semiconductor manufacturing and testing technology is controlled by a few major companies: ASML (Dutch), Lam Research (U.S.), KLA (U.S.), Applied Materials (U.S.) and Tokyo Electron (Japan). China is, however, attempting to improve its domestic capabilities, but most of the key equipment and technologies needed to manufacture advanced semiconductors are restricted by the United States, and the Dutch government has supported these restrictions. This constraint will put China on a much longer development path.

When will China be capable of sourcing equipment and building their own advanced semiconductors? The current estimate is 2032. However, not all equipment and electronics use advanced technology, so it is important to keep in mind the more pedestrian semiconductors, and China will have significant capabilities and capacity from mid-2026, and it will only increase from there.

Managing the Risk (Not)

Companies should have well-defined risk appetites and thresholds when it comes to known risks such as this, but they don’t. In 2021, a Gartner study found only 14% of those surveyed said they had a formal risk appetite statement in place prior to a disruptive event. Only 15% said they had a playbook in place for specific events prior to the event. In sharp contrast, 65% of leaders said in a recent poll that they have risk mitigation plans in place for a Taiwan disruption. Maybe rapid progress has been made in the last six to nine months, or maybe there is a significant gap in perception vs. reality. 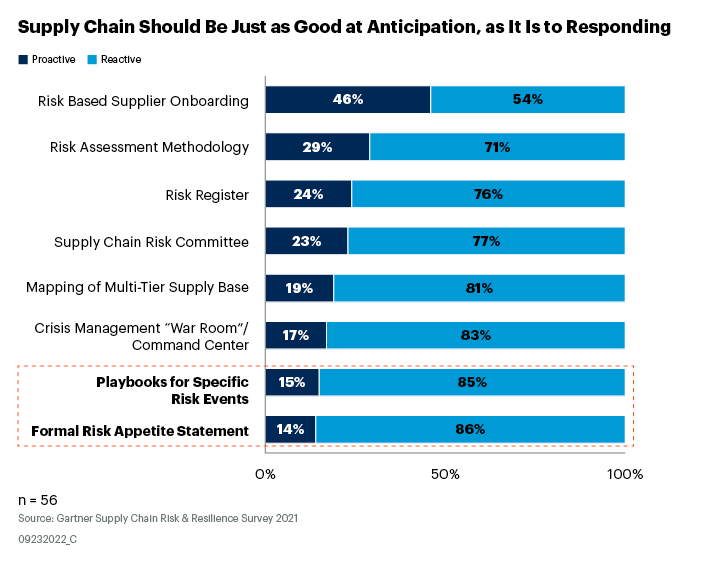 Unfortunately, most companies today don’t have much of a say when it comes to sourcing semiconductors from Taiwan. As an example: for a company that purchases capital equipment (such as tractors used in agriculture) there is a multi-tiered supply network needed to build the control systems. These suppliers purchase semiconductors from companies that in turn use a network that could ultimately have components coming from the island. This activity is typically low volume, and there is no leverage in the supply network to exclude specific “country of origin” products. In this case the risk appetite is being dictated to them vs. defined by them.

We know this risk exists, and even if companies plan to do nothing, this decision must be weighed and acknowledge. Leaders need to consider the consequences of taking that path versus the costs of mitigating the threat. In any case, it can’t be ignored.

The Clock is Counting Down

Semiconductors are now being considered a matter of national security in the same way oil has been for many years. As we move closer to 2032, more countries will invest in semiconductor manufacturing capabilities within their own borders. But will this ever bring semiconductor security to a region or country? In a recent Gartner poll, 57% said that it would take longer than a decade — or possibly never — due to the complexities in technology and supply chain.

So how will this play out in the relationship between China and Taiwan and the rest of the world? One view is to play the long game, which China has played very well so far. In the next 10 years, China will have significant domestic capabilities and western countries will also be bringing back capabilities to their shores. But will any have a truly self-contained semiconductor capability?

As countries build and expand their own semiconductor capabilities, in a way, they are solving China’s long-term reunification problem at the same time. Would China take an action that would threaten many other countries by isolating Taiwan? It doesn’t look very likely in the next five to seven years as they would be causing great harm to themselves.

Help shape Gartner’s research: Take part in the 2022 Gartner Future of Supply Chain Survey to get a first look at this year’s key trends and we’ll send you a high-level summary of the key findings as soon as it is available. The survey will be open until October 15th.