The sky was eerily dark for mid-afternoon, the sun a faded red dot. Ash floated to the ground like smudgy snowflakes from some distant apocalyptic storm.

This was the scene from Stan’s backyard in Northern Colorado, last summer. The source of the ash storm was a nearby forest fire, the largest in state history. While lucky enough to avoid a repeat so far in 2021, his community is catching secondhand smoke from the giant fires burning in Oregon and California.

According to the North American Drought Monitor, a scientific source, a record 90% plus of the Western United States is now in drought and 50% is under extreme conditions.

But is this just an isolated incident? In Sarah’s community of Dorset in the United Kingdom, residents have faced some incredibly hot days followed by lashings of rain. Conversations with neighbors have focused on the strange and unpredictable summer weather.

Last week, the United Nations Intergovernmental Panel on Climate Change (IPCC) published the sixth assessment report (AR6) since its inception in 1990. This report was composed by esteemed academics and its language was unequivocal: “Human-induced climate change is already affecting many weather and climate extremes in every region across the globe. Evidence of observed changes in extremes such as heatwaves, heavy precipitation, droughts, and tropical cyclones, and, in particular, their attribution to human influence, has strengthened since AR5 [our last report in 2014].”

United Nations Secretary-General Antonio Guterres went a step further, describing the report as a “code red for humanity.” The latest assessment further catalogues the extent of these disruptive weather conditions across all regions. 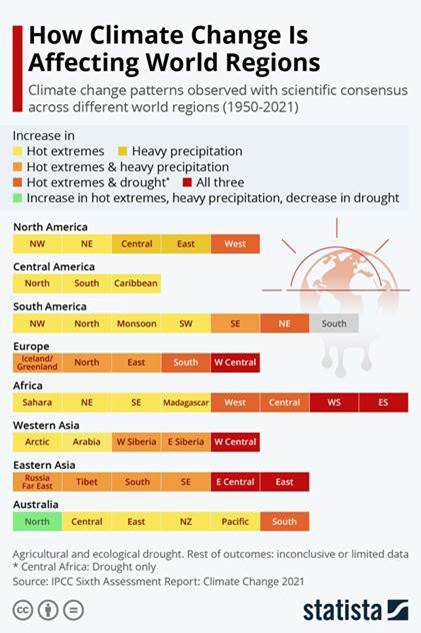 The hot extremes and drought behind record fires in Stan’s community have fueled similar disasters on nearly every continent this year. Siberia, commonly known as one of the coldest inhabited places on Earth, is now ground zero for a 10-million-acre fire, larger than the rest of the world’s active forest fires combined. On the other extreme, rising temperatures are melting ice sheets at an unprecedented rate, threatening coastal regions with rising sea levels. Extreme storms dump 100-year event levels of rain on top of damaging gale-force winds with increasing regularity. It’s clear that the next generation will be living in a very different world from today.

This is a classic “tragedy of the commons” situation. Clear lines are being drawn between climate change and carbon, methane and other greenhouse gas (GHG) emissions, yet no individual actor can solve the problem on their own. It is more costly for those who try to reduce these emissions, while so many others treat them as externalities.

There are certainly bright spots in the corporate world, typically more advanced players who understand both the purpose-led and longer-term business reasons for setting aggressive emissions reduction targets. But it’s not enough. The AR6 makes clear that even if we start reducing emissions today, the repercussions of what is already in the atmosphere will continue the disruptive climate trend line for at least the next decade. But that does not mean all hope is lost. Although the science is alarming, we must not allow ourselves to be disarmed of our agency to act. We must act now, because a 3C° warmer world will always be worse than 1.5C°.

What Can We Do?

It’s time to redouble our efforts. Here are three actions that we can all take to start moving this needle in the other direction:

While we are collectively contributing to the emissions behind increasingly disruptive climate change, the IPCC report still holds out hope that, with collective action, we can turn this (Earth) ship around in our lifetimes. As supply chain leaders, we have outsized influence on the outcome. The future is quite literally in our hands.

From Supply Chain ‘Egosystem’ to Ecosystem

As we move toward a post-COVID-19 world, it’s critical for...