Globalisation is on the ropes. Both US presidential candidates now oppose the Trans-Pacific Partnership. Britain has just voted itself out of the European Union. The tiny Belgian region of Wallonia nearly killed a deal between the EU and Canada. Global trade volumes are down for the first half of 2016 and for the first time since World War II, international trade with the United States has fallen during a period of GDP growth.

We may have seen a high water mark of globalisation.

Local for local is on the rise

New data on supply chain job additions and reductions puts some teeth to the long discussed, but still nascent trend of reshoring. Countries that have spent 20 years closing down old-style factories are now seeing the return of some work. It may look completely different from the well-paid but unskilled manufacturing jobs of old, but the movement is happening. 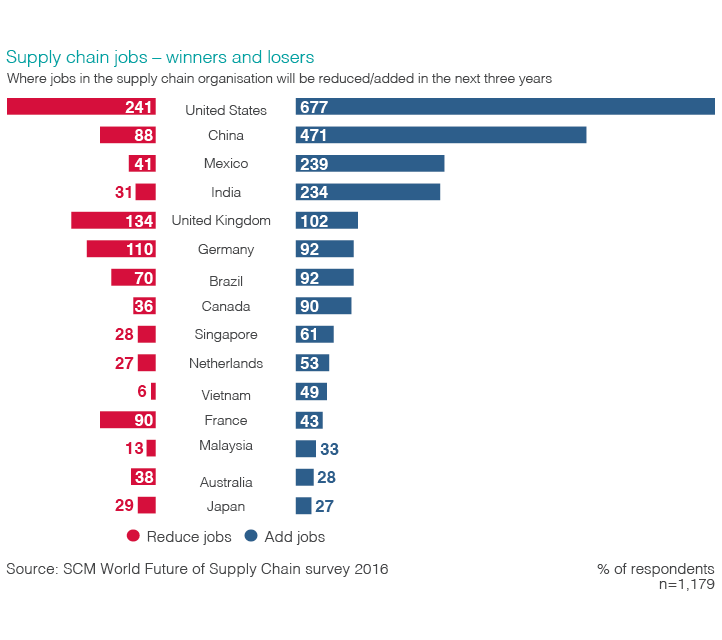 The generation of work that moved from old industrialised nations to low-cost emerging markets has run its course. In its place is a manufacturing network that’s increasingly small-scale, highly automated and close to end-use markets. To quote a line from The New York Times: “The Walmart revolution is over”.

Among supply chain leaders, these trends have long been evident. Regional supply chain organisational structures complemented by corporate Centres of Excellence are increasingly common. Automation in production continues to expand. Even industries like apparel are finding ways to make clothes and shoes less labour-intensively and closer to customers – Nike’s Flyknit is a compelling example.

Distance is getting expensive – don’t be fooled by cheap oil and abundant container ship capacity. Global transport from Asia to North America or Europe is getting expensive in terms of risk. The recent Hanjin bankruptcy could be the tip of an iceberg of shaky ocean carriers. The industry is overbuilt and yet underpowered in terms of technology to provide visibility to shippers.

Add in port labour unrest and uncertainty over trade regulations and six weeks on the ocean could end up sounding quick. Shipping/logistics disruptions is the highest rated supply chain risk in our recent Future of Supply Chain survey. 75% are somewhat or very concerned about shipping problems in 2016-17.

Local is agile – reshoring is happening, sort of. What’s really happening is that manufacturing is regionalising and automating. The case example of Trelleborg in Sweden is typical of how small, easily programmable, collaborative robots allow more work to be done by fewer people, with greater flexibility and in a high wage country. This is also working for General Motors, Schneider Electric and Johnson & Johnson.

Small manufacturers like Marlin Steel in Baltimore find the same. Automation installed for fabricating specialised metal baskets allowed Marlin to increase sales five-fold while adding only six extra employees to an original staff of 18. The goal wasn’t low cost, but a massive expansion of the product line. It saved the company by opening new markets through greater agility.

Platform design is the best defence against devastating supply constraints – local for local is great, but industrial clusters are still a fact of life whether it’s Shenzhen for electronics, eastern Germany for optics or Taiwan for semiconductors. Consciously designing such essential components into adaptable product platforms reduces the risk of going long on supplies from such choke points.

The more such vital inputs can be shared across global product designs, the better the business can support local specialties with limited bill-of-materials risk. This is true for Mondelēz, which is pioneering this approach in food, or BMW in automotive.

Made in China was once a watchword for everyday low prices. This is now in the past.