As we sift through data from SCM World’s 2017 Future of Supply Chain survey, one of the most striking shifts from last year’s responses is the level of perceived risk in areas outside of our traditional span of control. The biggest jumps from 2016 are in the percentage of respondents who report being “very concerned” about data security, natural disaster and war.

The game today has changed, from managing risk with deeper supply chain relationships and analysis, to preparing for outright disaster. 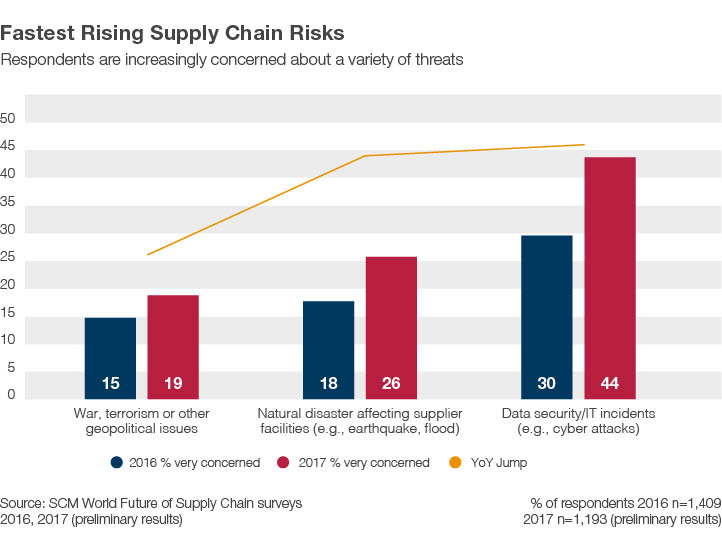 A decade ago supply chain risk was primarily focused on supplier failures, commodity price volatility and component shortages. Mitigating these threats was possible with closer supplier cooperation, collaborative planning around upstream constraints, and dual sourcing. The playbook was essentially about identifying potential weak links in the chain and shoring them up with shared ownership of supply continuity.

This is no longer enough. Where once we worried about localized mistakes or oversights upstream, now we worry about cataclysm, potentially at the hands of actors bent on destruction. The new world of supply chain risk means preparation for widespread, systemic disruption in our immediate future.

The share of supply chain practitioners “very concerned” about war, terrorism or other geopolitical threats is now nearly one in five. This is the same level of worry attached to financial failure of a critical supplier, breach of intellectual property rights and counterfeit products. It is also a huge jump from 2013 when only 8% were “very concerned.”

The fear is not baseless. In response to heightened security, terrorism is morphing into vehicular assaults, mass shootings and cyberattacks. SCM World’s London office was shut for a while this past summer after the incident at Borough Market. Geopolitics, meanwhile, is a hotbed of instability, as exemplified by the recent Catalonian independence vote. Trade rules, freedom of movement and currency exchange rates are all subject to swings in this domain.

War itself is also now on the menu. Geopolitical intelligence provider Stratfor has just released its fourth-quarter forecast, with its top prediction being a hot crisis in North Korea this autumn.

Business leaders generally prefer not to comment on topics like these, but one hopes they are working on contingency plans behind the scenes.

I spoke recently to the CEO of Puerto Rico’s largest health insurer, who was on the ground dealing with the aftermath of Hurricane Maria. He described a “total system failure.” Some 9,500 containers of supplies were at port in San Juan, but there were no drivers. There were no drivers because they were stuck at home due to lack of fuel and communication. There was no fuel or communication because of a lack of supplies and people to repair the distribution networks. His main question: “Where to start?”

Natural disasters, especially if they become more common and severe with climate change, bring total system failure. The response in Puerto Rico could have included drones or other airdrop operations from the decks of ships moored offshore. Preparation in advance could have included bunkers of fuel and equipment stationed around the island. Normal operations won’t work in extraordinary situations. Maybe we need the supply chain equivalent of an anarchy closet to be truly prepared.

This week’s Wall Street Journal included a headline stating that Yahoo’s 2013 data breach impacted three billion accounts. On the heels of the recent Equifax disaster and ongoing revelations of Russian interference in the 2016 U.S. election it should be little surprise how fast the threat of data security problems has risen as a worry for supply chain leaders. 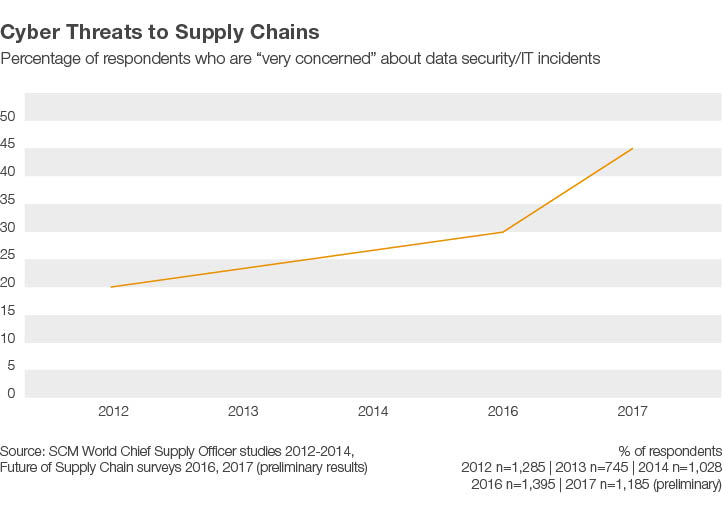 As with war and natural disasters, cyber threats have the potential to kick off systemic failure, meaning a sort of domino effect whereby ordinary preparedness fails to overcome infrastructure, communication and human breakdowns.

Prepare for the Worst

Securing your own supply chain in the event of these kinds of crises might depend on propping up the community around you. The situation in Puerto Rico may still be getting worse before it gets better. North Korea threatens the electronics industry, but could also strangle ocean and air transport in the North Pacific. Hacking the banks could freeze payments.