Cherry picking data, selective and incomplete use of evidence, and quote mining … it is election time in the United States and the political ads that accompany the electoral process are in full force. For those of you unfamiliar with this process, the election season brings a slew of television advertising that portrays one candidate without reproach and disparages the other to the point of wondering how they made it to adulthood, let alone how they were selected to represent their party. Over the years this selective use of data, evidence and quotes to portray the opponent as someone no right-minded person would vote for has reached an art form.

What does political advertising have to with business?

Never has the use of data and statistics been more important. Culturally, there has been a push within corporations for evidence-based decision making to ensure “objectivity.” But as a university professor of mine once said, “The first thing you need to learn and understand about statistics and data is that you can use it to say whatever you want it to say.”

In a recent Gartner Marketing and Analytics Survey, when asked why analytics is not used in decision making, one in three executives said it was because the data findings conflicted with the intended course of action. The survey found we are just as likely to exclude analytics from decision making because we don’t like data as we are because the quality of the information is bad (see chart).

This is known as confirmation bias — the idea that we seek information that confirms our pre-existing beliefs and ideas while rejecting or avoiding information that challenges them. In political advertising it’s intentional. In our own decision making, that isn’t always the case. 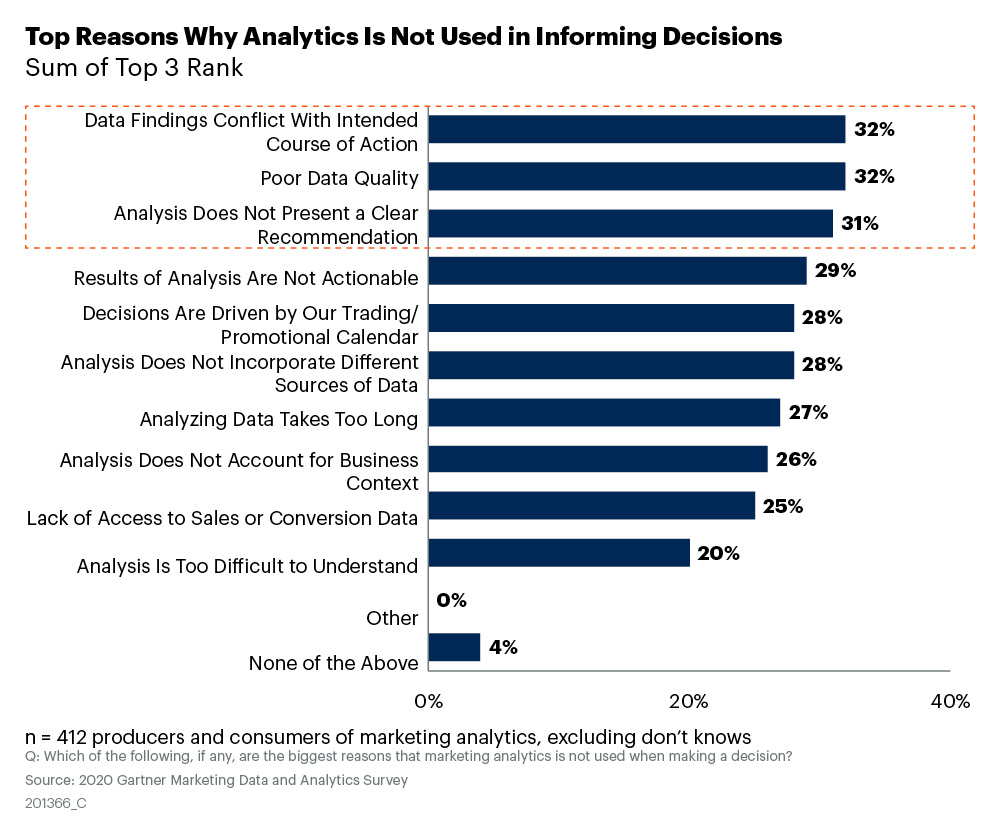 Starting at a Disadvantage?

A colleague of mine, Alan Duncan, vice president for data and analytics, wrote in a recent report, “Neuroscience and cognitive psychology show us that most people are not equipped to engage with facts. Most humans are wired with mechanisms that inhibit the ability to interpret data.” The argument is that we are emotional beings first, logical second. I know I’ve been there. I’ve invested so much in developing the business case that I find myself overly attached to the outcome rather than objectively presenting multiple options so that, as a group, we decide on a direction that best positions the company for success, even if it isn’t the one I recommend.

What Do You Do?

So, if we are naturally wired this way, what do we do? One way is to force a different perspective. That could be by making it a requirement to present point-counterpoint arguments or by incorporating someone unbound by legacy thinking, like the French army did. In a 2019 article, the BBC illustrated how the French used science fiction writers as “visionaries” to help them plan for the future. The article stated that “the visionaries will ‘propose scenarios of disruption’ that military strategists may not think of. The team’s highly confidential work will be important in the fight against ‘malicious elements.’ It comes amid efforts by the French to innovate its approaches to defence.” Many times, we are too engrained in the status quo to realize anything different.

Today, we are forced to solve challenges we’ve never faced before in our careers. We are being asked to evaluate and fund solutions that include technology completely unfamiliar to us. Although extreme, the example of political advertising stands as a reminder of the pitfalls that could come from disproportionately relying on our own experience combined with a desire to convince others that our view is correct. It is particularly important now as many of us go into the time of year where we are justifying near to mid-term projects and resource allocation. As we shake our heads at the blatantly one-sided political advertising, we can also use it as an opportunity to reevaluate our own use of information.

From Recession to Economic Boom?

Designing Our Value Chains for Planet and Profit