It’s ironic that the idea for this blog entry on education came from my 20-year-old son Nate, who regularly got kicked out of his elementary school classroom for moving fast and breaking things. We take solace that his teacher said we needed troublemakers like him to settle the West. Perhaps.

Nate has since channeled his considerable energies toward a college major in political science and sends me three to four thought-provoking-if-occasionally-arcane policy-related stories per day. His latest offering was strikingly relevant to this week’s questions from three different supply chain leaders on technology and the future of work:

“Dad, I didn’t know how radical the concept of public universal education was. Check out this 1765 quote from John Adams (the father of American conservatism):”

“The preservation of the means of knowledge among the lowest ranks is of more importance to the public than all the property of all the rich men in the country.”

Adams goes on to make the case for the first-ever progressive tax to fund universal education. This call to action came despite his and his peers’ willingness to fight to the death against all other forms of taxation by the British monarchy that was exercising ruthless control of the American colonies at the time. Presciently, Adams concluded that equipping the masses with education was more than a matter of prosperity. It was a matter of national security.

Whatever we think of taxes, Adams’ perspective on education is more vital than ever.

The press is replete with prognostications that new technologies like artificial intelligence (AI) will lead to net job loss regardless of degree of educational attainment. Those predictions are dangerously narrow and misleading. Per Fall 2018 study of 300 million job postings from 2008 to 2018, containing requests for 15,842 different skills, Gartner was able to impute with reasonable confidence that by 2025 AI will deliver net 500,000 new jobs to the economy. 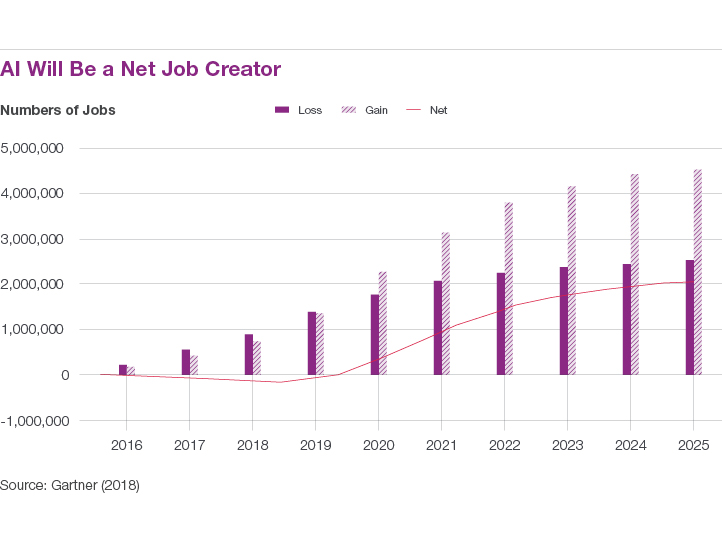 AI is, of course, fundamentally disrupting the nature of work. Roles are shifting to focus more on social-creative skills (which AI does not offer) and digital dexterity (the skills required to use and harness this fundamentally new class of tools). But the work is there if we prepare to seize it.

To that end, recognized supply chain innovators like GE Appliances and Schneider Electric are proactively engaging and activating local educational ecosystems to close near-term skills gaps and shape and build the workforce of the future. Yet it’s increasingly clear that a different, more foundational crisis is brewing.

Per a recent 8,000-word LinkedIn essay by Ray Dalio, founder and co-chairman of Bridgewater Associates, the world’s largest hedge fund manager, the baseline educational system is crumbling under our very feet.

It’s a far cry from Adams’ vision for universal access — and now we know a strong predictor of demagogic populism and war. I don’t like the comparison to the 1930s, but Dalio makes a compelling case that we are there again, on the precipice.

Whether to sustain supply chain productivity improvements or to protect the peace, our time appears to be now. The emergence of figures like Dalio and their call for bilateral political action gives reason for hope. But incrementalism won’t do. Supply chains are fueled by educational excellence. So, apparently, is our future.

This summer, my son Nate heads to Washington, D.C., to intern at a think tank that — not surprisingly — positions itself in stark opposition to his parents’ own political views. But on this we still agree: Adams was radical. May we call on that revolutionary instinct again.