This decline is not surprising given the combination of a record decade-long economic expansion and expiration of the one-time profit boost from President Trump’s 2017 tax giveaway. Short term, most forecasts predict overall economic growth will continue. But the next inevitable down cycle is just as likely as not to be longer and more intense than previous economic downturns thanks to the triple threat posed by unprecedented U.S. fiscal deficits, ballooning global debt burden and accelerating geopolitical instability.

The question for supply chain leaders is what to do about it. One answer may be, “Nothing.” 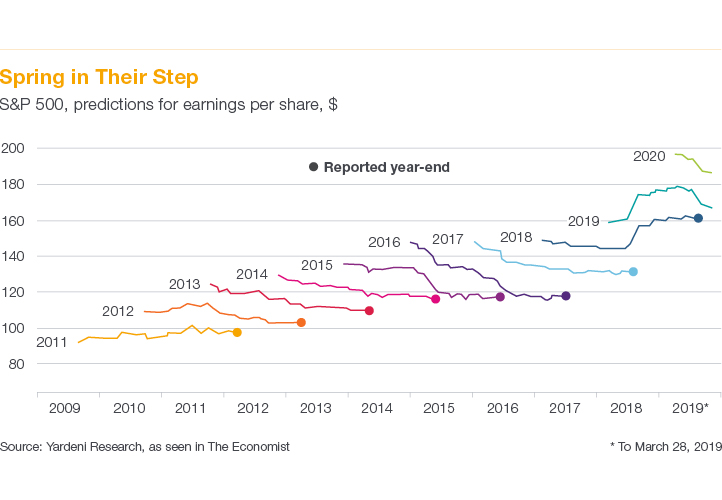 A December 2018 Harvard Business Review study of the world’s top-performing CEOs indicates the top two predictors of leadership success in turbulent times are, paradoxically, steadiness and stability. This result is in part due to the ranking methodology itself, based on financial returns over each CEO’s entire tenure. Because these CEOs have been successful, many have enjoyed a long run (an average of 16 years versus an average of 7.2 years for the entire S&P 500). But it also reflects the stubborn and often contrarian brand of customer centricity that assures leading companies stay the course against a long-term vision — even as short-term threats pop up.

Per Amazon’s Jeff Bezos (among just six CEOs who’ve remained on the list since this HBR study started in 2013): “When things get complicated, we simplify by saying, ‘What’s best for the customer?’ And then we take it as an article of faith if we do that, it’ll work out in the long term.”

Of course, this presumes the capacity to experiment relentlessly along the way. Among the big market-making innovations (iPhone, Amazon Prime, Netflix streaming, Zara’s fast fashion, Google’s search), we didn’t know what customers would want until we showed it to them. Bezos himself claims it takes on average seven years for true game-changing innovations to bear fruit.

This need to innovate drives consistent questions among supply chain leaders I’ve met over the past months: How do we do that? When we’ve been rewarded primarily for reliability and efficiency, how do we craft and activate cultures of discovery? How do we create the space and time for that sort of step-function breakthrough, sustain the attention of key stakeholders who need to come on board and weave fresh innovation back into core processes at scale?

Per our past three years of research, we know that leaders like Amazon, Unilever, Nike, 3M and others in our Supply Chain Top 25 build and sustain these inherently competing modes of thinking and operating via so-called “bimodalism.” It’s the simultaneous operation of interlocking tactical and strategic operating models that assures flawless execution within today’s business alongside aggressive exploration of what may add value years beyond the conventional horizon of the standard corporate three-year plan.

Most understand the theory, but a large number are still unclear about how in practice to create two ways of working that coexist, cross-pollinate and flourish. The result is that some retrench around “quick wins” that fail to deliver on the innovation promise.

A fall 2018 study on digital innovation indicates that many still measure the success of their digital investments in terms of cost- and margin contribution. The same could be said of innovation beyond digital, e.g., sustainability as driver of local efficiencies, or trade optimization as a means to bypass the latest policy barriers. While there’s nothing inherently wrong with projects that de-risk the value chain or deliver near-term financial return, the absence of real customer-led breakthroughs leaves the big money on the table and can ultimately be fatal to sustained momentum in the C-suite. Bezos continues, “Big companies need to scale everything up, including the size of their failed experiments.” 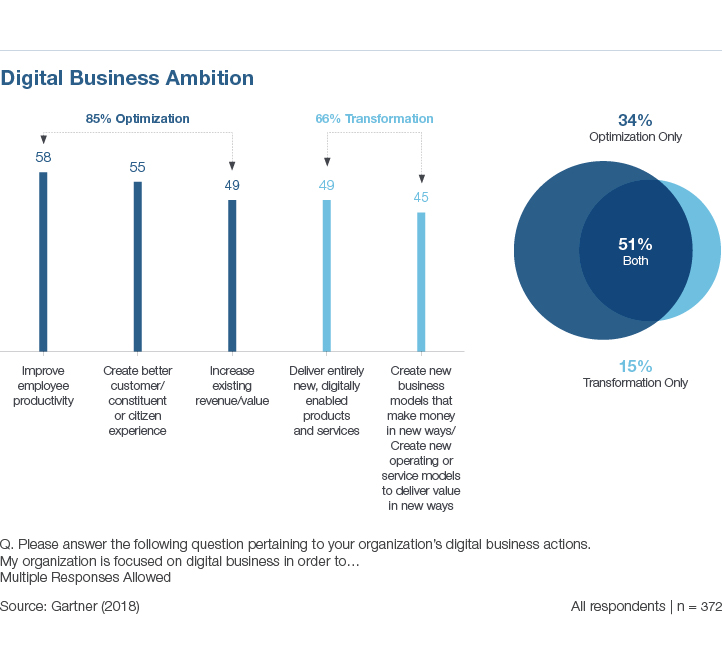 This is a fresh area of research, so we don’t yet have the full recipe for cultural reinvention. But what we do know is those who get it right get to dictate the rules of the game. And this community is increasingly replete with bimodal examples to follow. To name just a few of the latest:

Per my previous note on digital dexterity, we also know with unprecedented precision and predictability the specific qualities that drive innovation, and the skillsets required to activate breakthroughs on our teams.

So maybe the answer isn’t, “Do nothing.” The guideposts are there, but treat today’s economic indicators as background noise. Keep leaning on the customer — and each other.