Happy New Year everyone! I hope you all enjoyed some well-deserved down time with loved ones. We’re a couple of weeks into 2022 and the hits just keep coming. The U.S. is consistently posting daily COVID infections north of 1 million and this week set a new pandemic record for hospitalizations. Europe has been similarly impacted by the Omicron surge and China, with its “Zero Covid” approach, has again taken to shutting down major cities and infrastructure to extinguish community spread. 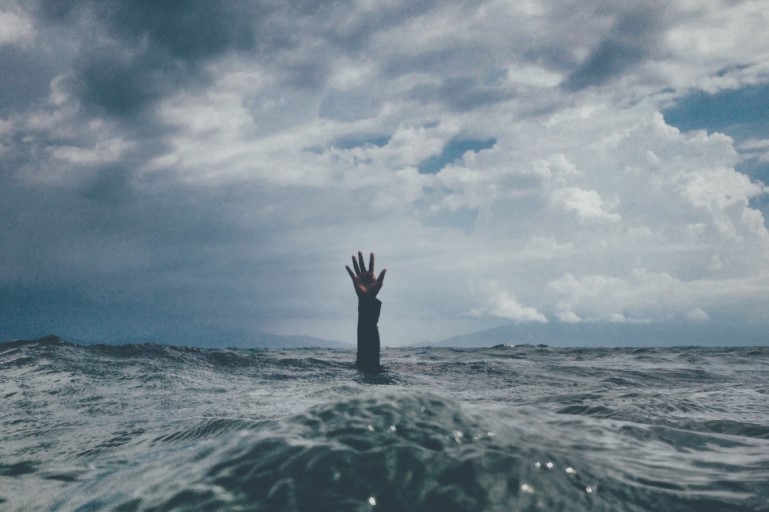 The net results aren’t surprising. International shipments are further delayed, store shelves are sparser and at-home deliveries are less reliable. Earlier this week, The Wall Street Journal published an astonishing analysis conducted by the New York Federal Reserve Bank. These economists created an index that captures the magnitude of our current supply chain disruptions in the context of the last quarter century. Suffice it to say, Icelandic volcano eruptions, financial meltdowns and Japanese earthquake/tsunamis don’t hold a candle to the current level of disruption from constraints and inflation. 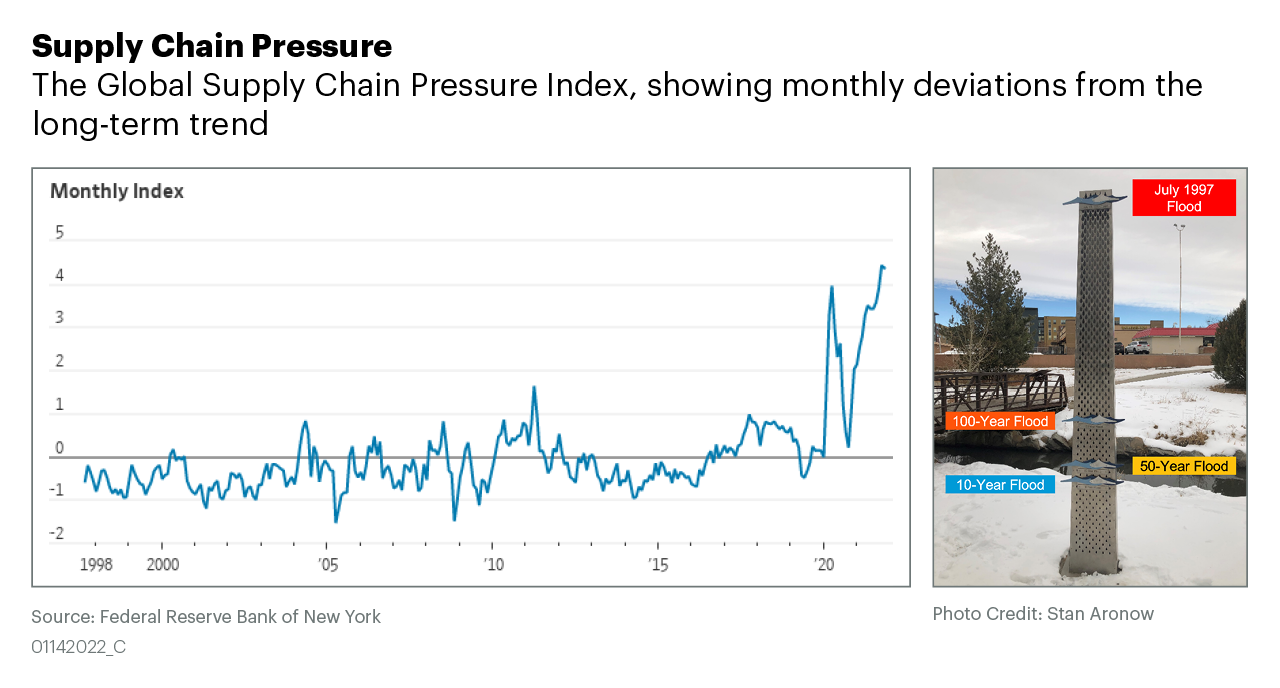 The statistical scale on the chart is standard deviations from the mean over the period. As context, with a normal distribution, the probability of being four deviations or greater from the mean is 0.006%.  It reminds me of a sculpture on my local walking path in Fort Collins, Colorado, commemorating a destructive flood that was similarly unprecedented in the modern era.

Where Do We Go From Here?

Last year at this time, I wrote a blog titled, 2021: Our Mirror Year, cautiously heralding a return to economic growth and the potential for a new “Roaring ’20s.” While the long-term scenario may still arc in that direction, this year’s assessment is admittedly more clear-eyed realist than optimist. So, where do we go from here? Let’s consider this through the lens of economic markets, geopolitical/trade risks and global health.

Economic Markets: Multidecade-high goods-related inflation has proven durable heading into 2022 (e.g., the U.S. Producer Price Index is approaching 10%). Employers in the much-larger services industry have initiated a potential wage-price spiral through pay raises granted in 2021 and planned for early 2022. The response? Central banks in most developed markets, including the U.S. Federal Reserve, plan to raise borrowing rates in the nearer-term and start pulling out cash flooded into financial markets through previous bond purchases. Monetary interventions have a lagging effect, so constraints and inflation may worsen, before reversing course. Industries that require large multiyear investments to boost capacity (e.g., semiconductors) may see excess supply come online simultaneous to slowing demand. Further, as 2021 results start becoming the baseline for comparison, the combined effects point toward economic contraction. The best case might be a “soft landing” engineered by central banks and the occasional fiscal intervention.

Geopolitical/Trade Risks: One hundred thousand Russian troops on the Eastern Ukrainian border and unpredictable regimes in Iran and North Korea, aside, there are plenty of other geopolitical and trade risks looming that could tie up global supply chains. One year in, the economic fallout from Brexit is coming into sharper relief, including additional red tape tied to international border crossings, dislocated labor markets and anemic trade growth due to less favorable tax and tariff rules. The biggest X-factor for 2022 is, of course, China. Continued pressure on Taiwan, expansionist moves in East Asia and internal pressure on corporations to support the government’s “common prosperity” goal will certainly have spillover impacts on corporate supply chains serving these markets. China’s moves to corner markets for key minerals feeding the high-tech and electric vehicle markets, as well as continued development of a self-contained Chinese high-tech industry, will put pressure on other players in those industries. The broadest near-term impact to supply chains will likely come from China’s health policies. The Chinese government’s “Covid Zero” playbook, while draconian and highly disruptive to its citizens and the broader economy, will be difficult to abandon. In the near term, the shift toward living with the virus in an endemic state will likely prove too unpredictable for China’s policymakers to adopt.

Global Health: On this front, the path of the COVID-19 pandemic has many potentialities. One of the more likely scenarios is that it becomes endemic. More specifically, SARS-CoV2 would become a fifth coronavirus to permanently establish itself in humans, alongside four “seasonal” coronaviruses that cause relatively mild colds and have been circulating in humans for decades or more (Nature, Beyond Omicron: what’s next for COVID’s viral evolution). Studies of these other seasonal varieties have shown that while they don’t mutate at the pace of other viruses such as influenza or HIV, they do mutate fast enough to reinfect those infected in prior waves (e.g., last year’s seasonal variant). On a more positive note, these new variants would be mild enough to have hospitalization and death rates more in line with the common flu. Moving to the endemic stage will likely also require sufficient global immunization rates and maintaining health and safety protocols in the period while SARS-CoV2 is still highly contagious and virulent. Efforts in place to develop and release “pan-coronavirus” vaccines to convey immunity across several variants of the virus would further hasten the move toward an endemic state.

One thing is certain, 2022 will bring unexpected twists and turns that will require continued agility, resilience and adaptability in our supply chains. While the two-year journey to get to this point has been exhausting, further diligence is required. Our leaders are telling us that their boards and executive committees have supply chain disruption fatigue and want to know when the pain will end. As a community we’ll need to navigate our own “soft landing” as markets move back toward equilibrium.